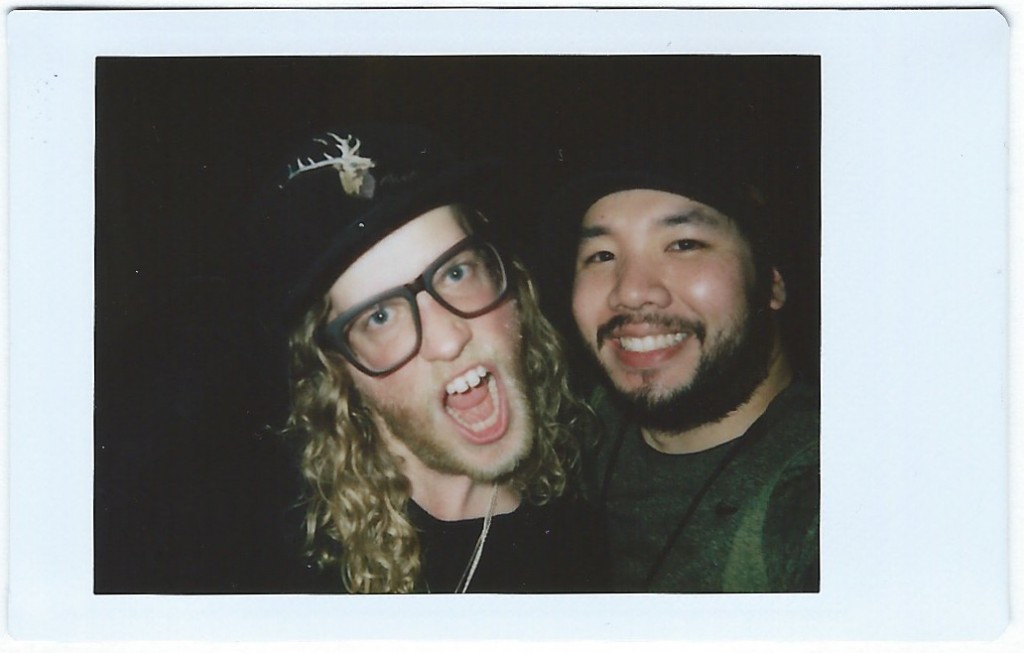 We have some of the best music photographers anywhere, doing their thing right here in the Northwest. One of those folks is SMI Partner and Chief Photographer, Jason Tang. Jason is one of the most respected and revered music photographers throughout the region. His photos have been seen on artists’ websites, posters and records. His work has appeared in online music magazines like, Guerrilla Candy, Findyourfav.com and of course, SMI. In addition, Jason is always willing to lend his talents to our partners, Melodic Caring Project and Seattle Living Room Shows.

On April 4, 2013, Jason participated in the 1st Annual “Rocktographer” event at the Triple Door. Jason’s photo of Matt and Kim won him 2nd place honors. A few months later at The Triple Door, Jason presented his first public photo exhibit, showcasing several of his best photos of top local and national artists.

Seattle Music Insider is about tapping into the music that lives inside of us. It is also about taking music fans inside places with an all-access pass. Through his brilliant photo work, Jason takes our readers backstage for some very special, candid, behind the scenes moments during Allen Stone’s sold out Evolution Of an Artist series from STG Presents, which recently took place at various venues all around Seattle. See his photos in the slideshow below.

To read our full coverage of Allen Stone: EOAA and see photos of all five shows, go here.

SMI caught up with Jason to ask him a few questions about his craft and his unique relationship with one of Seattle’s most beloved music artists.

SMI: When and how did you get started in Concert Photography?

JT: During my freshman year of college in 2000, I was doing promotional work for Aware Records out of Chicago. At the time, they had a bunch of up-and-coming artists/bands under their label, including John Mayer, Train, The Fray, and Brandi Carlile. Whenever one of their bands played a show around town, I would help with promoting and selling merch and would always bring my camera along and snap some shots.

SMI: Your photos are simply brilliant. In fact, they are so good that many artists provide you full access to shoot their shows so that they can use your photos for their website and in some cases, their record. Who are some of the other artists who have provided you intimate access?

JT: Thank you! It has definitely taken me years of shooting hundreds of shows to hone my craft and create my own style.

SMI: You have known Allen Stone for a few years. How did you meet, and how many shows have you shot of him?

SMI: What was one of your most memorable Allen Stone moments in the last few years?

JT: Probably Bumbershoot 2013 when they played at the TuneIn Stage in the shadow of the Space Needle.  It was the first time the band performed in their current instrumental configuration and you knew they had something special.  That crowd was electric.

SMI: What was your most memorable moment during the Evolution of An Artist series?

JT: I think just seeing how engaging Allen is to his fans throughout the week – in the meet & greets, during the show, and afterwards at the merch table.  That and seeing Pete Carroll groove to Al’s set at The Crocodile on Thursday was pretty awesome.

SMI: What is your favorite Allen Stone Jam?

JT: It’s tough to pick just one.  I love “Unaware,” “Nothing To Prove,” and “Satisfaction,” but I’ve really been diggin’ “Freedom” and “Voodoo.”  Can’t wait for the new album next month!

SMI: Now that is quite the diplomatic answer! We all can’t wait to hear the new record. I want to get the vinyl version of course! Thank you for all of your brilliant photos and taking some of Allen’s fans behind the scenes!

JT: My pleasure! It was a lot of fun and amazing experience following Allen around for a week!

Not only is he a multi-media journalist, he is also an accomplished musician. He is the founder of SMI and drives the creative look, feel and branding for the publication. His years of writing, arranging, and performing live music in a variety of genres inform his ability to communicate the message and the mechanics of music. Roth’s work on SMI reflects his philosophy that music is the universal language, and builds community. He believes it has the power to unite people of every race, religion, gender, and persuasion.
Related ItemsAllen StoneAMI Artist SpotlightEvolution of An ArtistGreg RothJason TangNectar LoungeNeumosNewsPhotosSeattle Music HappeningsSeattle Music HappningsSMI All AccessSTG PresentsThe CrocodileThe Paramount TheaterThe Triple Door
← Previous Story Kimbra and Mikky Ekko create a spectacular experience at the Neptune
Next Story → SMI Radio Ep. 107 On Demand: Allen Stone and Maiah Manser