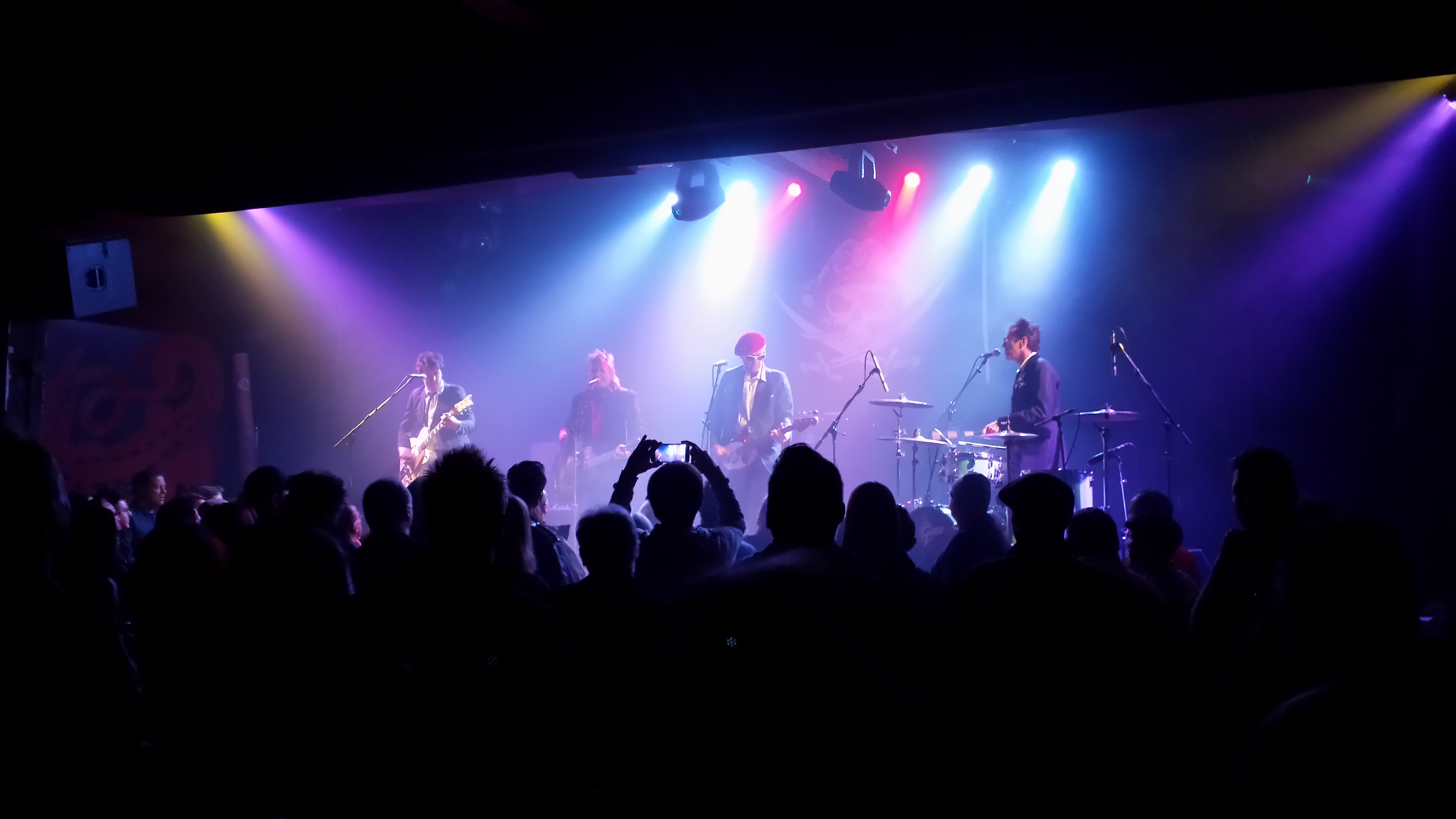 Dead Men Walking are an interesting bunch. Mike Peters (The Alarm), Captain Sensible (The Damned), Slim Jim Phantom (Stray Cats), and Chris Cheney (The Living End) spent almost thirty years bumping into each other on the road, and touring together in their respective bands before deciding to put their own thing together in 2006. After several live albums, and a revolving door of unofficial members like Duff McKagan (G & R), Fred Armisen (SNL/Portlandia), Glen Matlock (Sex Pistols), Lemmy (Motorhead), Brian Setzer (Stray Cats), Mick Jones (The Clash), and many other punk legends, they finally decided to put out a record of original music and tour. This brought them to Seattle’s Crocodile on May 5.

After an introduction from Dave Dederer (Presidents of the United States of America) lauding the broad section of rock history about to take the stage, the fellas strolled on: Phantom in a natty suit, faux fur loafers, and sunglasses; Captain Sensible in his trademark red beret and “new wave” sunglasses, Peters in a black and red ensemble topped with his tousled dirty-blonde hair and toting his matte black acoustic guitar, and Cheney sporting a tie with his white, Gretsch ‘Chris Cheney Model’ guitar made by Gretsch Australia. 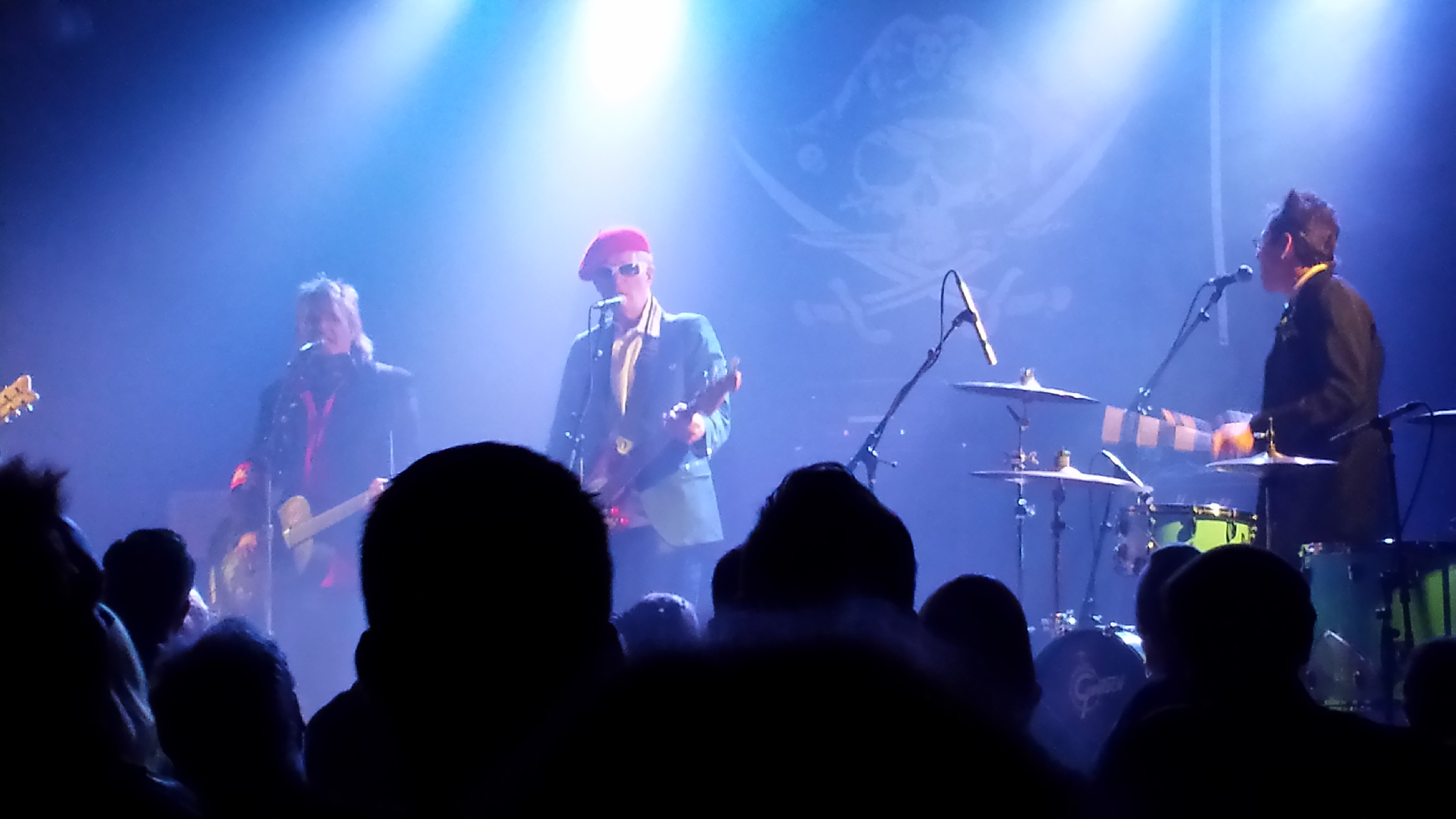 Everyone onstage was in high spirits, and Peters’ vocals have lost nothing since his days fronting The Alarm. When he strummed the opening to the Alarm’s 1983 hit “The Stand,” the audience roared their approval and eagerly sang along with his raspy and powerful delivery. Captain Sensible followed, belting out “Smash It Up,” a true punk rock classic from The Damned.

Dead Men Walking only played a handful of songs from Easy Piracy, including “Dead Man Blues” and “Song for Eddie” (written by Phantom in memory of Eddie Cochran). Peters explained that Cochran was a huge influence on everyone in the band, and a rockabilly theme was the undeniable undercurrent of their set.

As strong as the material is on the new record, the band opted to allow each member to highlight their own personal hits, much to the enjoyment of the crowd.

Phantom handled the vocals and impressed with his stand-up drumming on well-known Stray Cats selections “Runaway Boys,” “Rumble in Brighton,” and “Rock This Town.” Cheney sang “Prisoner of Society,”a punk anthem from his band The Living End, and played fierce lead guitar throughout the evening.

Dederer hopped onto the stage to play guitar and belt out a hit song from his own band, “Lump.” Kurt Bloch (The Fastbacks, Full 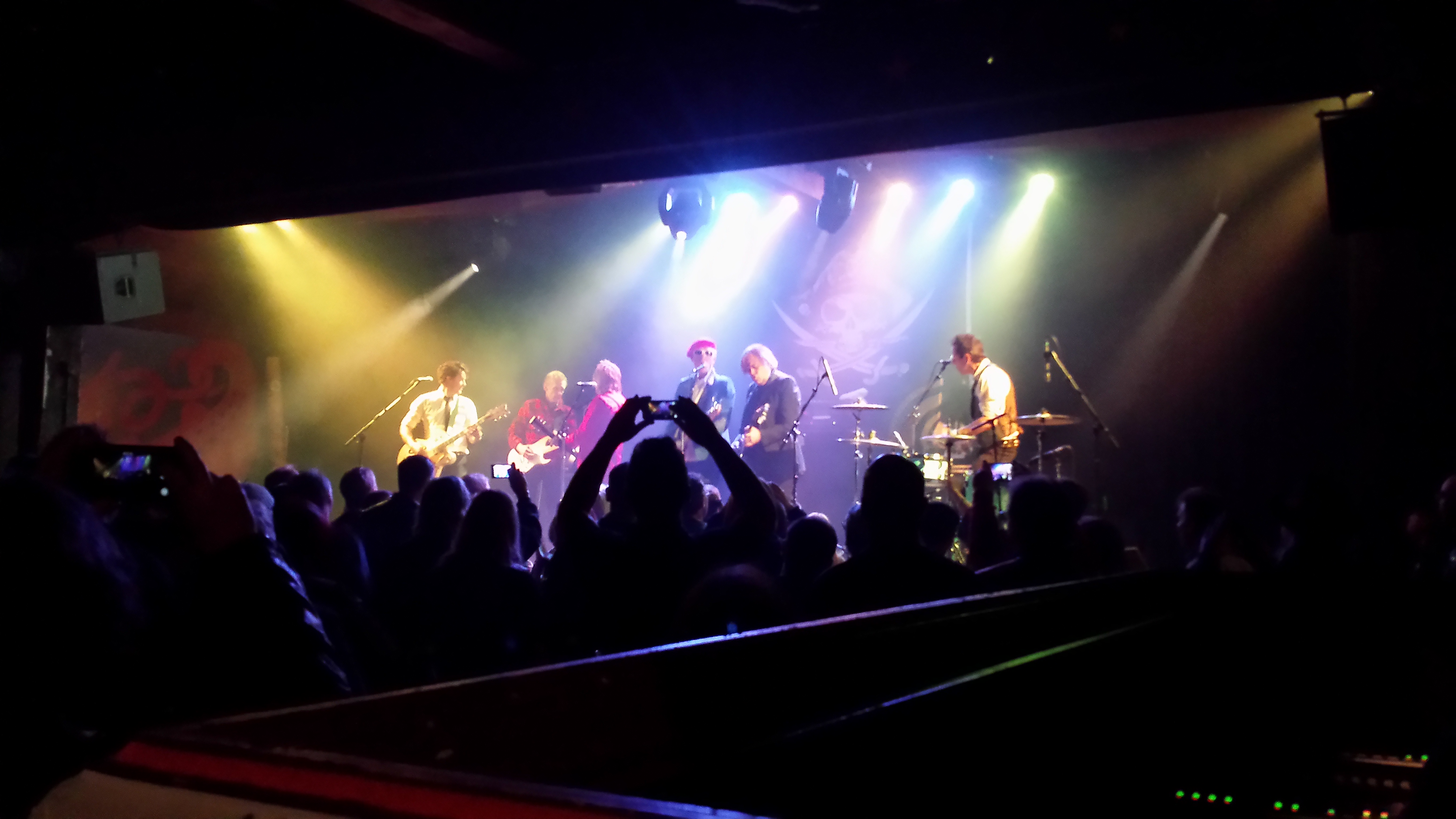 Toilet, Young Fresh Fellows, and 47 other Seattle bands) also joined in the fray and added some spark, and extolled true fandom when he joined Captain Sensible on two of The Damned’s best-known songs, “Neat, Neat, Neat” and “New Rose.”

In addition to the generous stream of hits, the band also unleashed an odd assortment of cover songs including the Stooges’ “Now I Wanna Be Your Dog,” the Beastie Boys’ “You’ve Gotta Fight For Your Right to Party,” and the standard “I Fought the Law.”

“I’m really liking Seattle!” enthused Captain Sensible toward the end of the night, “I don’t feel like I’m about to get mugged when I’m walking down the street. It’s not like that where I come from!”

It’s a short tour for Dead Men Walking with only five shows scheduled for the West Coast, and apparently nothing scheduled after that. I had a chance to correspond with Captain Sensible while he was still in England, and asked about Dead Men Walking, as well as his experiences as a punk rock legend.

Stavig: It sounds like the music on Easy Piracy is written as a band, but who’s the primary lyricist?

Captain Sensible: Everybody writes . . . that’s the thing. Music and lyrics – so the album came together with a minimum of fuss. Although to start with, they were mainly solo compositions, by the end of the sessions collaboration was rife, which bodes well for the future. And surprisingly for a drummer, Jim carries around a big black folder crammed with lyric ideas . . . the bloke’s a stand-up drumming poet!

S: When the Damned played in the States in 1977, did your preconceived ideas of what America was like get reinforced, or were you surprised that it wasn’t what you’d expected?

CS: It was actually a bit of a treat to get out of the UK for a few days as we weren’t everyone’s cup of tea over there. In fact our, how shall I describe it – uncompromising attitude – added to the blistering set, sent audiences heading for the doors at a few provincial venues if I remember correctly.

We just didn’t care if people liked us or not . . . as long as there was some kind of reaction. Good or bad. Between songs me and Rat would be trying to outdo each other in telling the worst joke – it was a way of differentiating ourselves from the choreographed stadium rock that was everywhere at the time. ‘It’s great to be back in (insert city name)…you’re a wonderful audience’, etc. Some of the crowd at CBs got it, some didn’t – we had fun watching them trying to make their minds up however. In fact that was always the thing – I wanted the audience to be part of the show.

S: Seattle band Mudhoney has mentioned that as they get older they see a large portion of their fan-base getting younger, especially as the band represents the “grunge” era that their younger fans missed and wished that they’d been around for. Do you see similar things happening with The Damned, where younger fans are clamoring to experience some of excitement of the original UK punk rock scene?

CS: Kids are looking at these plastic TV music shows and saying – no thanks, I’m going to watch a REAL band. You can’t beat a proper live performance . . . there are no dance routines, costume changes or rehearsed patter with Dead Men Walking. I hope the younger fans like what they see, get enthused and visit a guitar shop the next day – in the true spirit of punk.

S: What’s the most enjoyable aspect of playing with Dead Men Walking? Is there any pressure, or is it just a good time?

CS: Zero pressure. It’s like we are all on holiday from our slightly stressful ‘other jobs’ and can just enjoy the ride. As you can imagine with our combined years in rock n’ roll there’s a fair amount of swapping stories about our respective bandmates past and present – some hilarious – some not so. In fact, to anyone blundering in, the Dead Men Walking backstage experience might resemble a therapy session in progress!

Apart from that, we all share a love of classic rock n’ roll from the Little Richard/Eddie Cochran days through to glam and punk, so we are singing from the same hymn sheet there. Oh, we also like rude British comics like Viz and prefer tea to coffee. Mike and myself have nearly finished anglicizing Slim Jim. The tough nut to crack will be Aussie Chris, of course.

S: You were part of one of the most legendary rock tours in history, the Anarchy Tour of the UK in 1976. Do you have fond memories of the tour, or was it just a big hassle for everyone involved?

CS: Depends on who you talk to – The Damned, Clash, Pistols and Johnny Thunders’ band got on great – more than could be said for the four managers who all wanted pre-eminence for their bunch. McClaren put the package together ‘cos his lot couldn’t sell tickets outside London . . . a situation which changed when Steve Jones swore on a teatime TV show. At that point, with Rotten and company on all the front pages, the next day the Damned were no longer required to fill venues so we were given the heave ho.

I bump into Steve every now ‘n then, and put it to him recently that it doesn’t take a lot of skill to curse and swear on a TV program – I could’ve quite easily done that myself. More than capable! His reply? “But you didn’t, Captain, WE did”