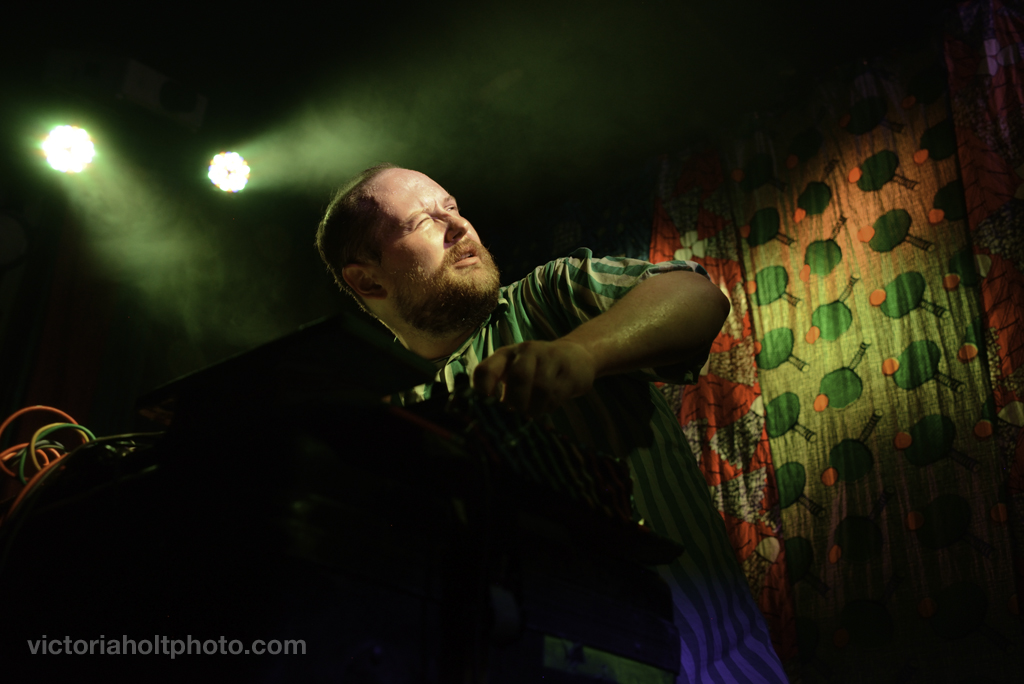 An intense blast of light and sound emanated from a multi-colored Neumos stage, as Dan Deacon stood at his podium of MPCs, mixers, and pedals. A barrage of samples and electronic percussion as frenetic as the flashing strobe lights flowed over the surging crowd of ecstatic fans, sweating in the humid Seattle spring night. The notes of his new single, “Feel the Lightning” came to a close, and the lights slowed down to rest on an equally exhilarated Deacon. Someone yelled out, “I love you!” Deacon smiled and responded, “I love you too, like two people who don’t know each other at all.” The crowd laughed and he continued, “I love you too, but I think we should define the boundaries of our love.” 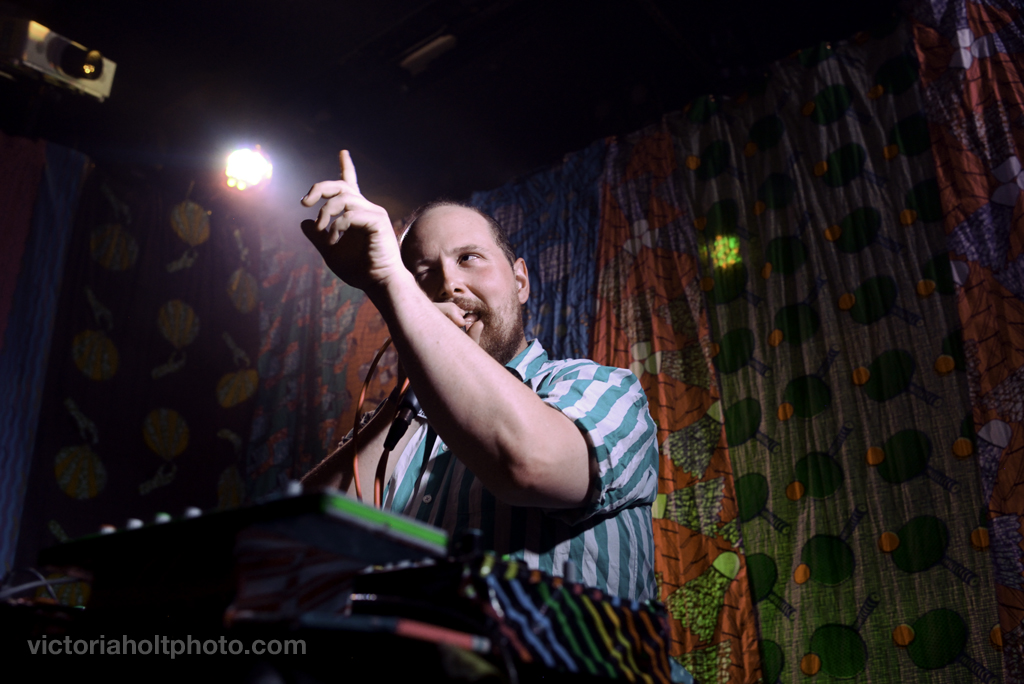 Deacon can move whole crowds with his performances, literally and figuratively, breaking down barriers and bringing people together. Friday night, he had the whole crowd form a circle, as two dancers faced off in the center, choosing someone new every five seconds to join in the fun. Later in the set, he had the room divide down the middle, and each side followed the dance moves of their “leader.” The leader then chose someone new whenever they felt like it, handing off responsibility to the next person. These crowd interaction moments are what make Deacon shows so spontaneously fun. 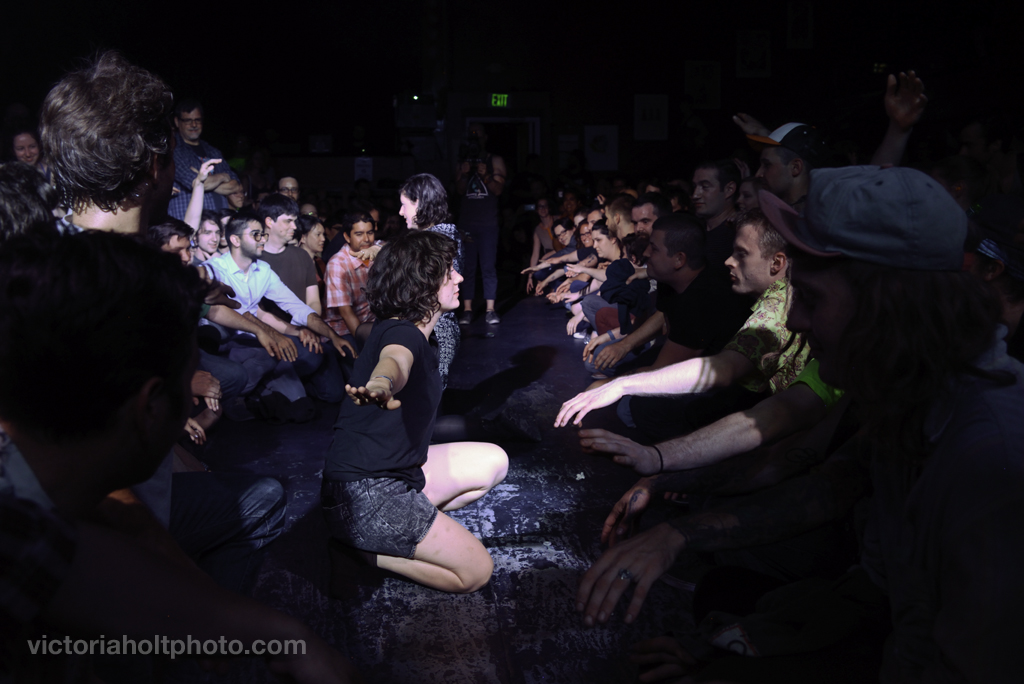 As people laughed and haphazardly followed directions, the room radiated with the simple beauty of human beings. Awkward smiles, a diversity of sizes and shapes, and an infinite plethora of ways to move and shake transformed the crowd into strange and wonderful animals. The whole scene was set to Deacon’s frenetic “Mind on Fire” from new album Glass Riffer.

Crowd favorites “Wham City” and “Crystal Cat” from 2007’s Spiderman of the Rings were as crazy as ever, whizzing along as crowd members released their inhibitions and flailed around. Every body was on fire as Deacon tweaked knobs, pitch bending his voice into ludicrous but oddly satisfying squeals, as the electronic chaos churned ever onward. Notes oscillated, rising and falling at Deacon’s whim, taking the listener on a sonic adventure.Halfway through the set, the sheets hanging behind Deacon pulled back to reveal a live guitarist and drummer pounding away. These songs are so intense that they’re challenging to follow on record, but live they reach their true potential, filling the room with emotion. 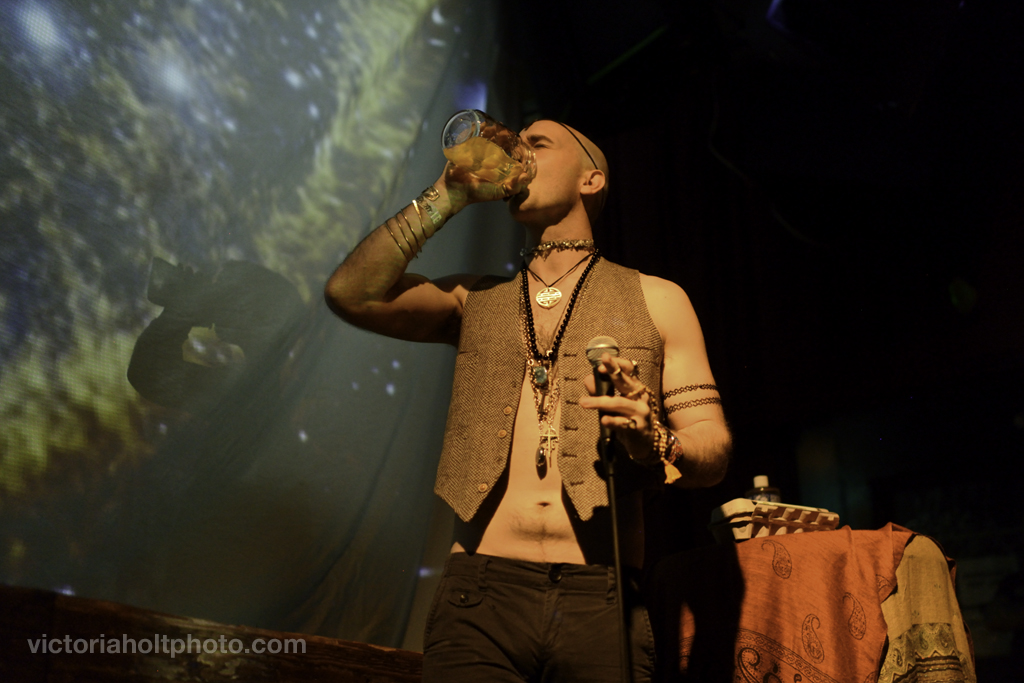 Opening the night were Ben O’Brien and Prince Rama. O’Brien is a comedian and filmmaker who would be at home with the likes of Tim and Eric Awesome Show, Great Job! and the website Everything is Terrible! He hails from Baltimore, MD and is part of Wham City, an arts and music collective started while he and Deacon were in school at SUNY Purchase. He stood in the crowd and had everyone sit down as he gave a PowerPoint presentation of a fake religion of which he was the leader. He explained that the tenets of this religion were formed during a session on the toilet when he read the back of a Dr. Bronner’s soap bottle. His Facebook page proclaims, “I am Earth Universe, an enlightened guru full of wise wisdoms and truth bombs.” At one point, he put on a fake Native American war bonnet and told the crowd, “Appropriation is great because you get to really like things without knowing anything about them.” His thick sarcasm had everyone giggling, and he finished the set strong by drinking six raw eggs, to the disgusted groans of the audience. Needless to say, it was a hilarious presentation. 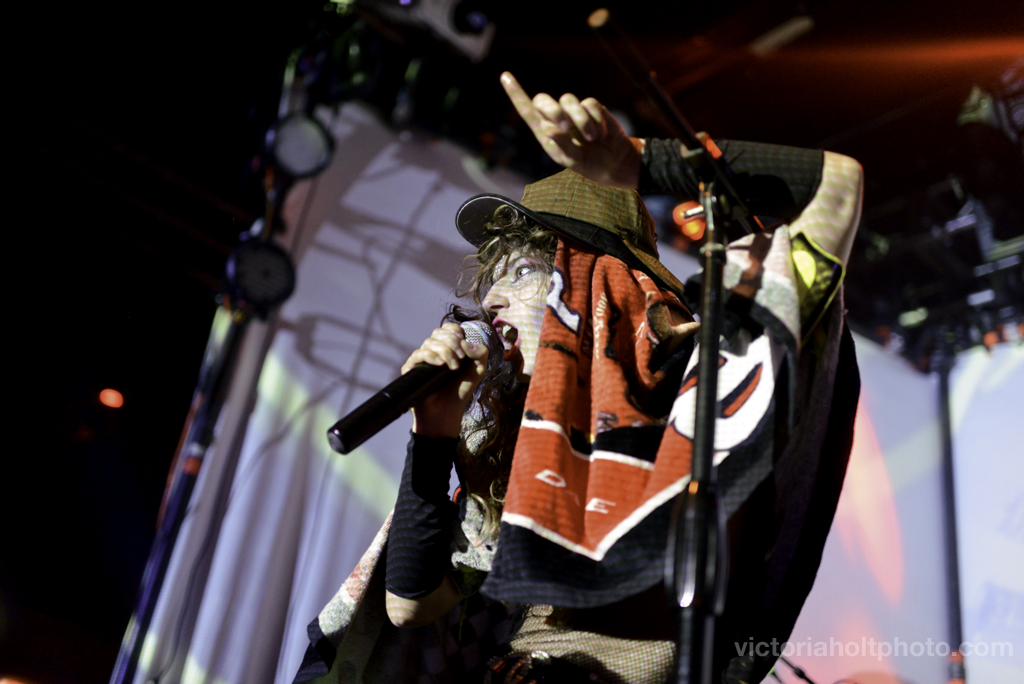 Psych-dance band Prince Rama, started by sisters Taraka and Nimai Larson, rocked out in green Monster Energy style leggings, with sparkly makeup and pearls on their eyes. Takara’s vocals were pitch-bent downward on command, so she could switch from her normal, high-pitched voice to a deep, bro-like voice. She used this while singing and speaking to the crowd, to great comedic effect. The drums and vocals were eastern-influenced, almost Bollywood-esque, and the guitar and keyboards gave the songs an electro feel. In 2012, the group put out a fake compilation album on Animal Collective’s label Paw Tracks, titled Top Ten Hits of the End of the World. Their website includes fake bios for all ten bands included, who tragically died during the “apocalypse.” As out there as their themes may seem, they were a ton of fun and very accessible live, jumping around and crowd surfing.

For his most moving instruction, Deacon had the whole crowd raise their arms and hold hands with the people on either side of them. As they closed their eyes, he gave a rousing speech that bordered on a guided meditation. He told each audience member, “Imagine the face of the person you love the most. It could be someone you have known your entire life, or someone who has known you your entire life. They might no longer be in your life, or no longer be of this world. Hold them in your mind’s eye and think about how they may have changed your life forever. Consider how different your life would be without this person in it.”

He continued, “Think about the last stranger you saw on the street whose face you can remember vividly. Perhaps they were just walking by, or perhaps they call the street their home. Imagine all of the people for whom that person is the person they love the most in this world. Think about how all of these people are just humans, and all humans want is to be somewhere they feel safe, to feel comfortable in their bodies, to love other people, and to be loved in return.” As the crowd continued to hold hands with their eyes closed, Deacon reminded the audience that for many people, these basic desires are very difficult to achieve.

The Baltimore-based artist continued, saying, “Think about the people of Baltimore, and all of their loved ones, and the people who love them . . . all of whom just want to be safe, and want to be comfortable in their bodies, and who want to be loved, and to love in return.” The crowd cheered and opened their eyes, sharing knowing smiles. People often roll their eyes at the cliché, “Music can change the world,” but at Dan Deacon’s shows, it starts to feel possible. 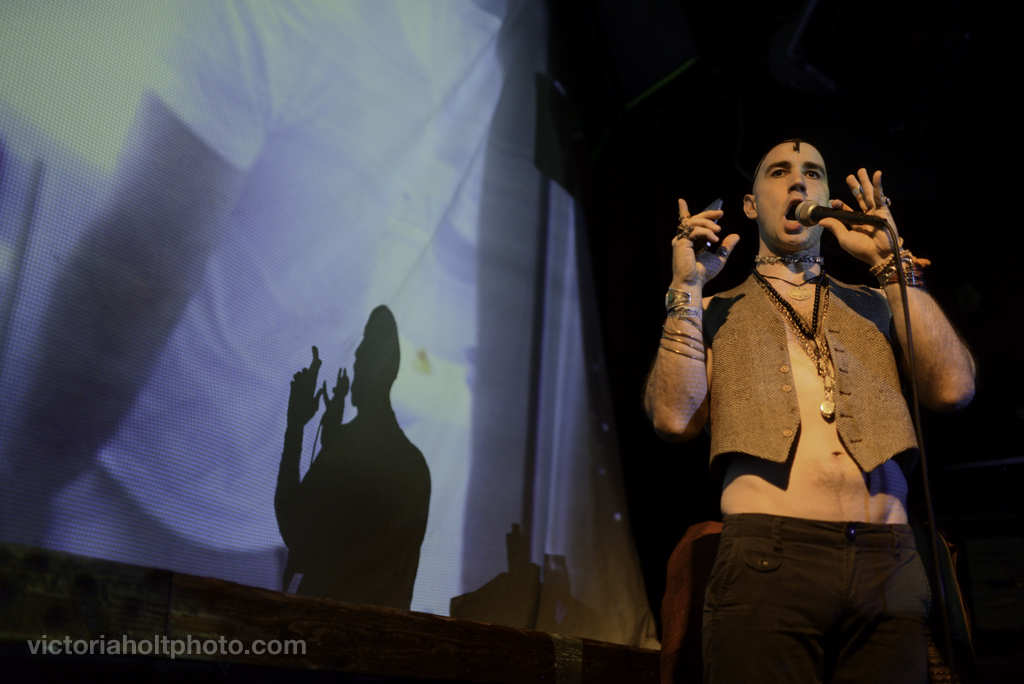 Originally from San Francisco, CA, Victoria completed her Bachelor of Fine Arts in Photography at Seattle University. Her passion is making live music look as great as it sounds. Her work has been featured in The Stranger, The Seattle Weekly, The Capitol Hill Times, and online with KEXP, Live Music Blog, and Back Beat Seattle. Her 2012 BFA thesis, “Seattle DIY: Live Music,” has exhibited at various venues in the Seattle area, and offers an in-depth exploration of six “Do-It-Yourself” underground spaces. For a behind the scenes look at music, she shoots in-studio performances at local radio station KEXP.
Related ItemsAnimal CollectiveBen O’BrienDan DeaconEarth UniverseGlobalNeumosNewsNimai LarsonPaw TracksPrince RamaSeattleSeattle Music HappeningsTaraka LarsonVictoria HoltWham City
← Previous Story Dead Men Walking Come Alive at the Crocodile
Next Story → Neil Proves He’s Still A Diamond That Shines