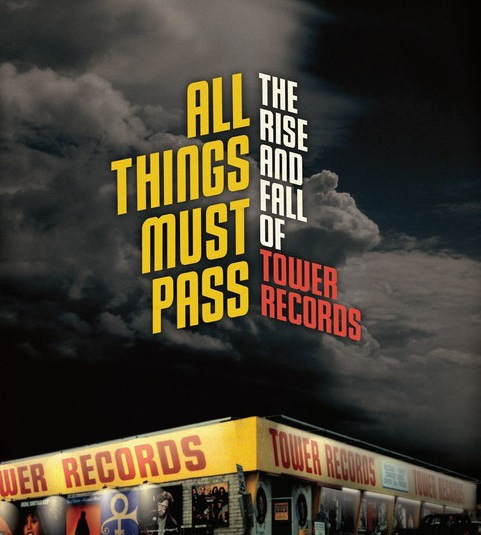 SIFF kicks off this weekend in Seattle, and one of the movies that will premier is a project that is near and dear to our heart:. All Things Must Pass About four years ago, actor Colin Hanks had a vision to make a film about the beginnings and demise of a beloved, global brand, Tower Records.

Hanks, making his directorial debut, shot footage inside a building that once housed thousands of records. He also interviewed Tower’s founder and spiritual leader, Russ Solomon, to get the story of the birth and death of one of the world’s most famous record chains. After thousands of laborious hours of sifting through archives and memorabilia, and countless hours of research and interviews, Hanks’ love letter to Solomon, former Tower Records employees, and loyal customers is now complete.

This is a film by the people and for the people who love music. Hanks launched a Kickstarter campaign to raise funds for the film. Nearly 1,700 backers including myself, helped raise $92,025.00 in record time. After four years in the making, the movie made its debut at SXSW earlier this year to rave reviews. This weekend, Hanks will be in town to attend the film’s debut at SIFF tomorrow at 7:00 p.m. at the Harvard Exit in Capitol Hill and again on Sunday, at 3:00 p.m. at SIFF Cinema Uptown.

For more details and to purchase tickets, Go Here.

We will conduct a face-to-face video interview with Colin tomorrow for a future release, but in the meantime, you are invited to listen to the past podcast interview done with him for SMI Radio. Colin talks about what Tower Records meant to him, the fundraising process for this project, as well as the history and legacy of one of most iconic stores in music retail history. Colin also shares his passion for music and what drove him to make this film.

I think most of us that love music and grew up with vinyl and CDs  have at least one or two Tower Records stories . . .

I grew up in Anderson, Indiana in a family of musicians, music lovers, and artists. Music was always on in our house. I remember getting up on Sunday mornings and sitting around in the living room reading the funny papers and listening to everything from Frank Sinatra to Louis Armstrong and The Beatles.

In the early ’70s, we moved to LA. The following year, my mother succumbed to bone cancer, way too young, at the age of 31. She was nurturing, beautiful, and loved music. I still miss her.

My mother helped shape my musical tastes and provided my musical education, turning me on to one great artist after another. One of my favorite memories was tagging along with her to the record store to go get the newest Bob Dylan or Simon and Garfunkel record, and then coming home and listening to the music with my mother humming along.

The ritual of going into the record store, cruising the aisles, and looking at these beautiful photographic masterpieces with the magic vinyl disc inside was a touchstone of my childhood. Watching my mother take out the record, put it on the turntable and turn on the receiver and to hear the music that came out of the speakers . . . ? It was pure joy!

As a young teenager, my family moved around. We lived in Sacramento and the Bay area, and eventually we moved to the Northwest. I lived in Los Angeles from 1984 to 1998 and then moved back up to the Pacific Northwest and have lived here since.

The one constant that existed throughout my formative years and adult life’s journey was music, and my regular pilgrimage to the record store. Regardless of what city I was in, one store in particular became my home away from home: Tower Records.

When I was sad, lonely, depressed or bored, I would head up to Tower Records and lose myself in the atmosphere and music.

Whenever I was there – whether it was the iconic Tower Records on Sunset Boulevard in LA or the Tower in San Francisco near the Fisherman’s Wharf – I was in my happy place. Every time I flew back to LA, my friend and fellow musician would take us back to our favorite hangout where we spent hours listening to music on the headphones the store provided.

In the “City of Angels,” the store on Sunset Boulevard was a mecca for music lovers from all walks of life. It was a place where social class, race, or gender just didn’t matter. All were welcome. Even though people had diverse musical tastes, we were brought together by our love for music. In the Sunset Tower, it wasn’t uncommon to see celebrities shopping alongside “civilians.” I remember one night I was standing right next to Chris Rock. He was just browsing the R&B bins right next to me. I glanced over at him, nodded, smiled and he smiled back. No words were needed. We were both sharing a similar experience in one of our favorite places in the world.

From the late ’60s through the ’90s, Tower Records was the go-to destination for music lovers all over the world. But technology marched on, and the advent of MP3 players, notably the iPod in the early 2000s, signaled the end of Tower Records – and other record chains, such as Sam Goody and Warehouse Records.

Unlike some of the aforementioned chains, Tower Records was more than just a retail record store. Actor, director and writer Hanks thinks so, too. He would know. He grew up in Sacramento – home of the original Tower Records store. Not only that, he also purchased over 1,000 records in the New York City store alone.

Although the Sacramento store holds a special place in his heart, Hanks’ Tower Records journey spans the globe. He said:

“One of the things that made Tower unique, there were hundreds of Towers around the world, any city that I was in, whether it was Sacramento, where I grew up where I first discovered Tower. Tower was always a point of civic pride for anyone that was from Sacramento.

As I moved to Los Angeles and as I started working professionally as an actor and sort of going to different locations around the world, going to One Piccadilly in London or going to Tokyo and seeing the eight-story Shibuya store, every Tower that I went to was familiar, and a place that I was comfortable in. Part of that was the fact that I am a big music nut, of course.

Tower was a big retail corporation but each individual store and location sort of had an individual feel to it. Each one was its own specialized store.”

Tower Records was the biggest success story in record store history. Over forty years, founder Solomon transformed it from a few modest shelves inside a Sacramento drugstore into a global chain that spanned 14 countries. In 1999, Tower Records made $1 billion. Five years later, the company filed for bankruptcy. To find how this happened, first-time director (and Sacramento native) Hanks explores what made the store a success. He discovered a fun-loving company that maintained a tight-knit family atmosphere and promoted from inside, filling its executive ranks with former store clerks and managers. Solomon and his boisterous clan regale us with tales of their heady rise— and even headier parties— as well as those of their heartbreaking end. Hanks intersperses these employee interviews with rare archival footage and testimonials from celebrity insiders, ranging from Elton John and David Geffen to Bruce Springsteen and ex-Tower clerk Dave Grohl. But the real star of this disarmingly affectionate tribute is Solomon himself. With a raconteur’s gift for detail, he and Hanks spin a story of dreams and drive that just happens to be the story of the record industry itself.

Director Biography
Hanks is an actor and director based in Los Angeles. He was nominated for both an Emmy and Golden Globe for his work in FX’s critically acclaimed mini-series, Fargo. All Things Must Pass is his feature directorial debut.

Not only is he a multi-media journalist, he is also an accomplished musician. He is the founder of SMI and drives the creative look, feel and branding for the publication. His years of writing, arranging, and performing live music in a variety of genres inform his ability to communicate the message and the mechanics of music. Roth’s work on SMI reflects his philosophy that music is the universal language, and builds community. He believes it has the power to unite people of every race, religion, gender, and persuasion.
Related ItemsColin HanksGreg RothRuss SolomonSeattle International Film FestivalSIFFSMI RadioTower Records
← Previous Story SMI Radio Ep. 109 On Demand: Chinook Fest Special with Cody Beebe & Austin Jenckes
Next Story → SMI Radio Ep.110 On Demand: Super Jam and Stephen Graham & Ryan Crowther (Everett Music Initiative)