“SMI Around The World”: Joe Driscoll and Sekou Kouyate The Triple Door 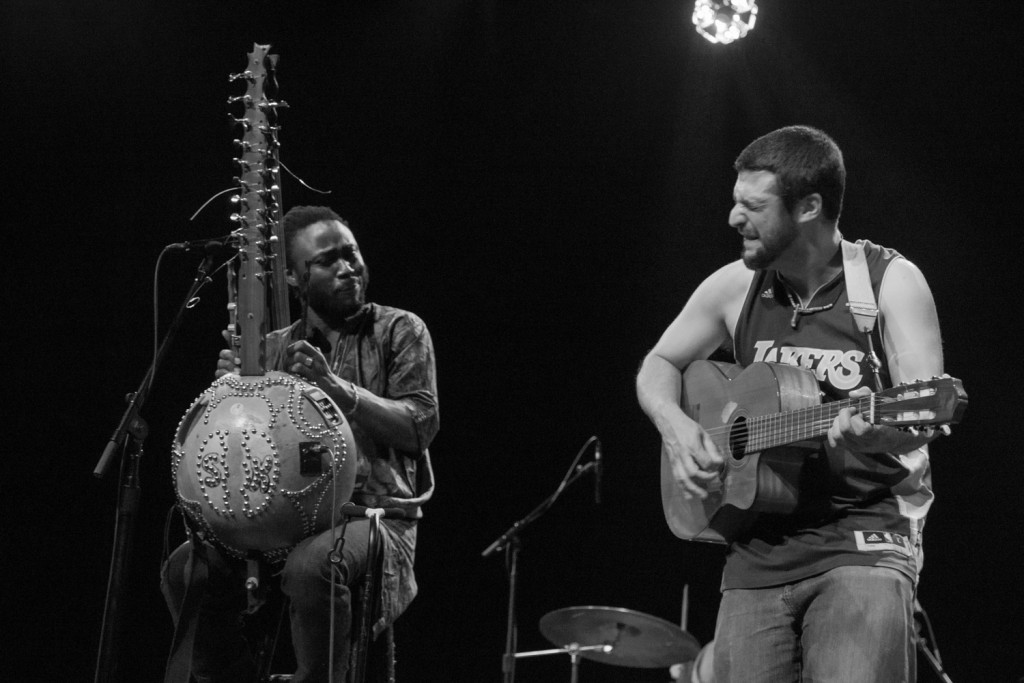 SMI debuts a new feature called “Around The World,” in which SMI guest contributor Christina Leiva explores the world music scene in and around the Puget Sound.

Driscoll is a rapper and songwriter whose fiery rapping skills fluidly bounce off the warm melodic rhythms of Kouyate’s magical kora. They feed off one another – blending genres together with ease. It’s a beautiful example of the power of music and its ability to break cultural barriers.

Known in France as the “Jimi Hendrix of the Kora” – Kouyate plays the unique ancient 21-string harp-like instrument heavily used in West Africa. His complex finger work on the electric kora is mesmerizing, as if the instrument is an extension of his soul.

Driscoll has been inspired by such artists as Woody Guthrie, Bob Dylan and Dela Soul. He is a multi-faceted artist who plays the guitar, harmonica, and has a special talent for creating beatbox rhythms with his didgeridoo.

Kouyate speaks little English and Driscoll little French, so music bridges their language gap, which allows them to communicate and thus create their distinctive and inspiring songs.  The pair met at the Nuit Metis in France and later created their first album, Faya. (Click Here for a free download of the duo’s release of the title track.)  Many of the lyrics on the album address social issues such as poverty and immigration. According to Driscoll, they “wrote about things that we knew and experienced, things that were important to us. We’ve both traveled the world extensively, so dealing with these issues were very important to us.” In their song “Passport,” the lyrics describe the power of music as a passport that opens doors, inspires and motivates us to love.

Christina's passion for travel and multi-cultural experiences have taken her across the globe. Her taste in music mirrors her passions. Christina takes SMI readers "Around The World" with her beautiful photography and eloquently written words, as she covers some of the best world music in and around the Puget Sound.
Related ItemsChristina LeivaFeatureJoe Driscoll and Sekou KouyateSeattle Live MusicSeattle Music HappeningsThe Triple DoorWorld Music
← Previous Story Sold Out Seattle Crowd SING IT ALL AWAY With Walk Off The Earth!
Next Story → Neon Trees Kicks Off North American Tour in Seattle