Parachute Strips it Down on Their Summer Acoustic Tour 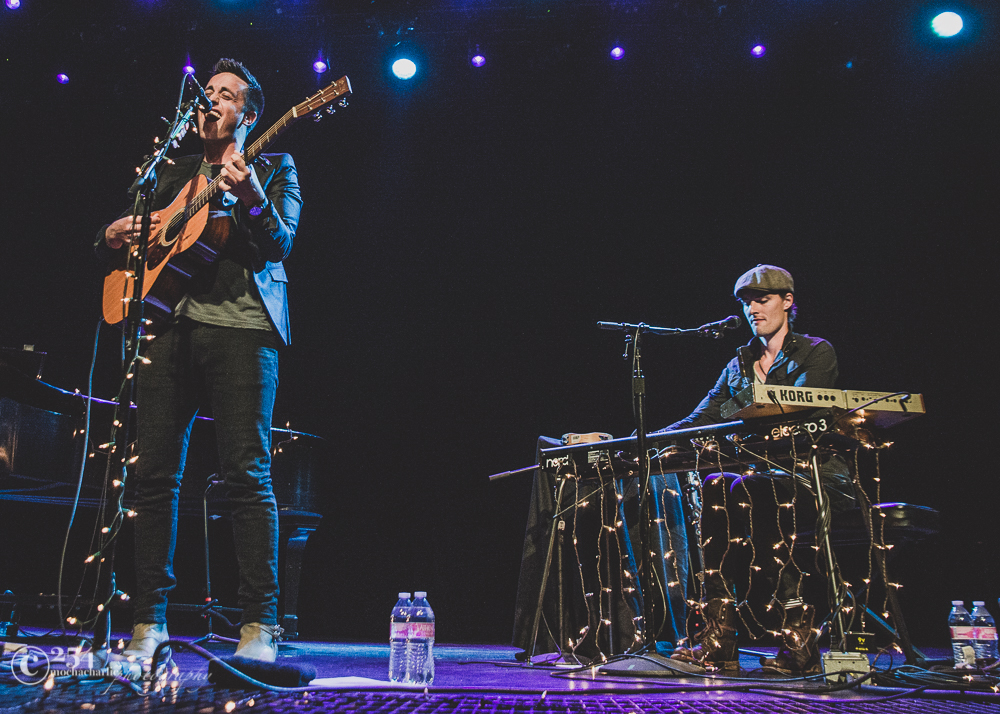 Many bands start out playing smaller shows, gain popularity, and move on to performing in larger venues, multi-platform stages, and in front of thousands of fans each night over their careers. For Parachute, they’ve been there. Done that. They still have many fond memories of what happens while out on big tours, including chatting with Gavin DeGraw in his boxers,  miming a harmonica on stage with a baguette with Kelly Clarkson, and recalling the fun dynamic of being in a room with the brothers Bo & Bear Reinhart of Needtobreathe, because they’re so serious, but not serious at all. This latest acoustic tour is a bit out of the ordinary for them since beginning their tours back in 2008, but they’re right where they want to be.

There were reasons behind choosing this style of tour. They knew it would just be lead singer, Will Anderson and keyboardist, Kit French who would be available and neither wanted to just go home to Nashville between full band shows (drummer Johnny Stubblefield was ill and couldn’t travel). They refer to this tour as an “awkward gap” in their schedule, and they looked to fill it with something rather unique. They knew their music could be stripped down, and it was a good change-up for them creatively. They wanted to play rooms they hadn’t played before and they purposely chose smaller seated style venues where attendance would be no more than 300 patrons. They had no idea how popular the idea would become until they learned that many of the dates had sold out weeks prior to the first tour stop. One such date was last Monday night’s show at The Triple Door in Seattle.

For Anderson, playing smaller shows may be different; however, he says “It’s the same level of nerves, but a different beast.” They payed hits off their first albums including, “Overnight,” “Kiss Me Slowly,” “The Mess I Made,” “Disappear,” and  “She,” among others. They played one cover, “Let It Go” (James Bay) and it was done beautifully. For their encore, they performed a fan favorite, “Philadelphia,” which they rarely ever play live. These shows give both Anderson & French the opportunity to share stories about their songs, why they were written, and who they were or weren’t written for. One of the stand out stories of the night was when Anderson explained to people why he no longer has issues about his many facial expressions while he sings (that involves moving his tongue around, a lot). He used to be self-conscious about it, but he embraces it now (since it’s a trait he’s had since he was very young), and tells fans, “Hey, it’s a great tongue!”

Parachute has undergone many changes over the years, but they’ve never lost their core. Anderson continues to write all of their material, and in his off time he writes and co-writes music for other artists. Since writing (and keeping) their song, “Can’t Help” (which was originally written for CeeLo Green), he still writes songs intended for other musicians to sing, but if he has a gut feeling about it, he keeps it for the band.

Anderson’s’s biggest regret, musically speaking, was not including their song “Square One” on their second album. “That’s my biggest regret. Because, it didn’t see the light of day. It leaked, but it never made it on the album, and it’s a great song.”  They’ve yet to decide whether it will ever get recorded.

Their musical influence from the beginning, and one of the reasons why they formed as a band was because they were drawn to the music of Dave Matthews. Their music doesn’t sound anything like his, “We’re less and less like him as the years pass. We’re not a jam band.”  The three original members aren’t going anywhere, nor will they be changing their style or sound because, as Anderson puts it,  “The three of us are very committed.” They feel that while working on their fourth studio album this past May (release date TBD, however they did mention perhaps Jan-Feb 2016), they’ve only been getting better. Their latest single, “Crave,” is merely a taste of what they’ve been working on.  They will continue to perform full-band shows, but they will hire out musicians to fill the gaps. They don’t foresee bringing on any other permanent members, for now.

NYC based singer/songwriter, Mikey Wax, opened the show, singing center stage, playing piano and guitar. His latest single, “Love Always Wins,” can be heard in the promo commercials for E!’s newest show, “I Am Cait.”

Mocha Charlie is an amazing photographer who has a real passion for music. She has her finger on the Pacific Northwest music pulse. She covers and shoots several shows per month in and around the region. She a brilliant photo journalist but most importantly, she is also a mother who does her best to balance out her life and live it to the fullest. Mocha Charlie uses her passion and talent to support the community, her friends and family any way that she can.
Related ItemsFeatureMikey WaxMocha CharlieParachuteSeattleTriple Door
← Previous Story Legendary Pop Rock Icon Brian Wilson Closes US Tour with Rodriguez in Seattle
Next Story → Third Eye Blind / Dashboard Confessional at Marymoor Park