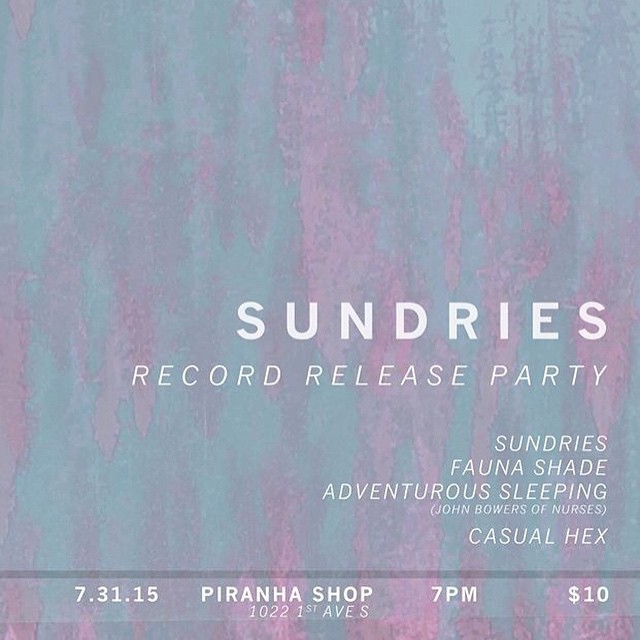 Sundries’ debut album, The Wave, calls to mind a half-tame, half-feral animal; one that has been burned a few too many times to trust the hand that feeds it. It comes across in this way because of two things: Sadie Frank’s voice and her lyrics. Yet while the lyrical delivery carries sexy/broken wariness, the music is all thundering bravado, attitude, and perseverance.

Frank’s voice is a thing of beauty, whether wallowing in bluesy growls or breaking with emotion. It’s a rich, impressive instrument, calling to mind Concrete Blonde’s Johnette Neapolitano or Goodness’ Carrie Akre. She sings of relationships, sex, drinking, blood, and living in the city. She sings from the gut, spitting dirty words like bullets at times, and others twisting her voice around like a snake. Travis Gillett’s and Frank’s guitars twine around each other as well, spiraling and then jagging as called for in each song. Meanwhile, the thudda-thudda, propelling rhythm of Leah Julius’ drumming along with Ben Lindbloom’s bass provide something to groove to. Indeed, as The Wave begins, it’s the rhythm section that pulls the listener in and hooks them before “Say What You Mean” builds up to Frank’s breathy “Hey, hello.”

“Sky To Change” treads a well-worn blues track, and Frank’s vocal just slides right in there and clicks perfectly as she cautions us that “you can’t tell the sky to change, ’cause it won’t at all.” “Saturday Night” is another standout, Frank’s cracked wailing and f-bombs building to a raucous, racing crescendo. “Pressure” mixes more blues with grungy rock and group backing vocals; and the closing track, “The Water,” starts off a slow burner that builds into a bonfire wash of guitar and sublime howls. Frank’s world can seem acid and harsh at times, but, like a tough alley cat, she lives to fight another day, and we get the sweet end of the deal with The Wave.

Sundries’ record release party is Friday, July 31 at The Pirhana Shop, with Casual Hex, Adventurous Sleeping, and Fauna Shade supporting. $10 at the door.

Check out Sundries’ video for the album’s title track here:

Christine Mitchell has been poring over album liner notes pretty much since she acquired the skill of reading, and figured out the basic structure of rock songs at an early age. Whether it’s the needle popping into the first groove of the record, the beeps that signal the beginning (or end) of a cassette tape, or digital numbers ticking off the seconds from zero, music brings Christine happiness, ponderous thought, opportunities for almost scientific study, and sometimes a few tears. When she started attending live shows two decades ago, a whole new piece of the puzzle clicked in and she has been hooked ever since.
Related ItemsChristine MitchellFeatureLeah JuliusNew Music PreviewSadie AvaSundriesThe Pirhana ShopThe Wave
← Previous Story Morrissey Back In Great Form at Benaroya Hall
Next Story → An Unshaven Look Back at Chinook Fest