By Christine Mitchell on August 3, 2015@Housetornado37 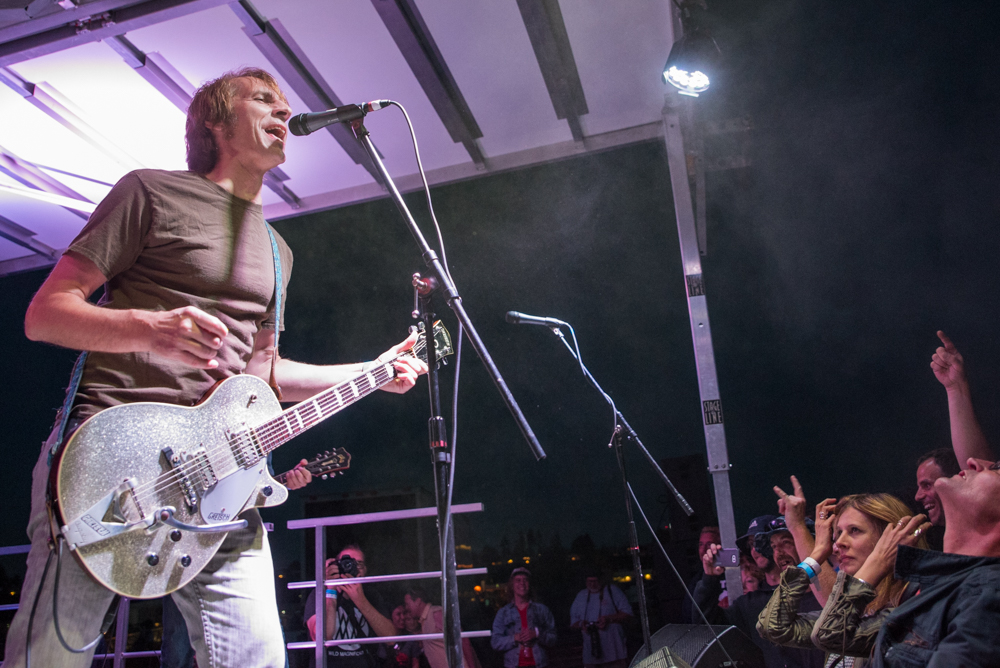 Mudhoney at Rock The Boat (Photo by Christine Mitchell)

A coup of major proportions took place in Everett on Saturday as the Everett Music Initiative and Scuttlebutt Brewing Company teamed up to bring grunge icon Mudhoney to the first ever Rock The Boat Festival. Not only that, but the supporting lineup was incredibly solid as well, with established and up-and-coming acts My Goodness, Fauna Shade, and Duke Evers taking the stage as the sun slowly set on the water at Boxcar Park. It was a beautiful evening that turned into a hard rocking night.

Duke Evers got things off to a rambunctious start as people started filling up the beer garden and lining up to taste some of the specialty beers that Scuttlebutt had on tap. Guitarist/singer Josh Starkel nimbly covered the stage, thrashing and jumping, while drummer Kyle Veasey cracked a continuously wide smile as he beat upon his drums. Fauna Shade slowed the tempo down a bit with their comfortable brand of hazy rock. Scotty Smith’s vocals were awash with reverb and ragged throatiness. The band just seems to get better and better with every show, and songs like “Marzipan” and “Jane” paired well with Scuttlebutt’s Walnut Porter and some spicy brisket from one of the food trucks. Smith thanked event organizers and EMI heads Ryan Crowther and Steven Graham, stating that Everett was his hometown and that the organization has helped his band immensely in the past year. Preach it, brother.

The sun was a glowing orange ball on the horizon as My Goodness powered up. The songs came hard and heavy, with drummer Andy Lum breaking at least one stick (yet somehow still finishing a song with it). The band is incredibly dialed into each other, yelling encouragement at each other during songs. Bassist Cody Votalato crowded into Lum’s drumming space repeatedly, each one feeding off of the other’s energy. Meanwhile, Joel Schneider alternately howled/crooned lyrics and performed an intricate dance with his guitar.

The crowd was definitely amped up by My Goodness’ set. Then Mudhoney started up.

At one point during Mudhoney’s set, Mark Arm jokingly said, “Can someone turn off the smoke machine?” There was a swirling haze in the air, but it wasn’t smoke. It was a dust cloud set off by an incredibly active mosh pit, and it didn’t let up. Mudhoney isn’t known for relaxing ballads, and the set list didn’t include much in the way of slow songs. Even the dirgey “Oblivion,” “1995,” and “Sweet Young Thing Ain’t Sweet No More” provided the band (and fans) with an exercise in extended jams. The crowd became frenzied during “I Like It Small,” “Justice, Rage, Retribution and Thyme,” and, of course, the anthem of a generation, “Touch Me I’m Sick.” At one point a couple came up the side stage ramp to take a long series of selfies, much to the amusement of guitarist Steve Turner, who was all smiles as he made fuzzed-out guitar solos look easy as pie. At another point, a little boy somehow made it up on stage right in front of bassist Guy Maddison. He danced a bit, then turned around to take in the band. Maddison beamed down at him before he hopped back down into the crowd. “The Only Son Of The Widow From Nain” was the intensely searing closer to Mudhoney’s set, and Mark Arm, having put his guitar away, paraded the stage like a man possessed by Iggy Pop himself, riling up the festival goers to the boiling point. The band returned to perform “Here Comes Sickness” as a farewell as the festival ended, and iPhones were used as flashlights as people wandered through the parking lot.

Rock The Boat was a rousing success. Crowther and Graham deserve an award for the hard work they have put in over the past year and a half getting Everett Music Initiative going. It’s working, and it appears that it isn’t going to let up soon.

Christine Mitchell has been poring over album liner notes pretty much since she acquired the skill of reading, and figured out the basic structure of rock songs at an early age. Whether it’s the needle popping into the first groove of the record, the beeps that signal the beginning (or end) of a cassette tape, or digital numbers ticking off the seconds from zero, music brings Christine happiness, ponderous thought, opportunities for almost scientific study, and sometimes a few tears. When she started attending live shows two decades ago, a whole new piece of the puzzle clicked in and she has been hooked ever since.
Related ItemsChristine MitchellDuke EversEverett Music InitiativeFauna ShadeFeatureMudhoneyMy GoodnessScuttlebutt Brewing COmpany
← Previous Story Capitol Hill Block Party – Day 3 Recap
Next Story → SMI on Tour: Planes on Paper and Christopher Paul Stelling in Portsmouth NH