SMI on Tour: Planes on Paper and Christopher Paul Stelling in Portsmouth NH

By Arlene Brown on August 6, 2015@brownfotobug 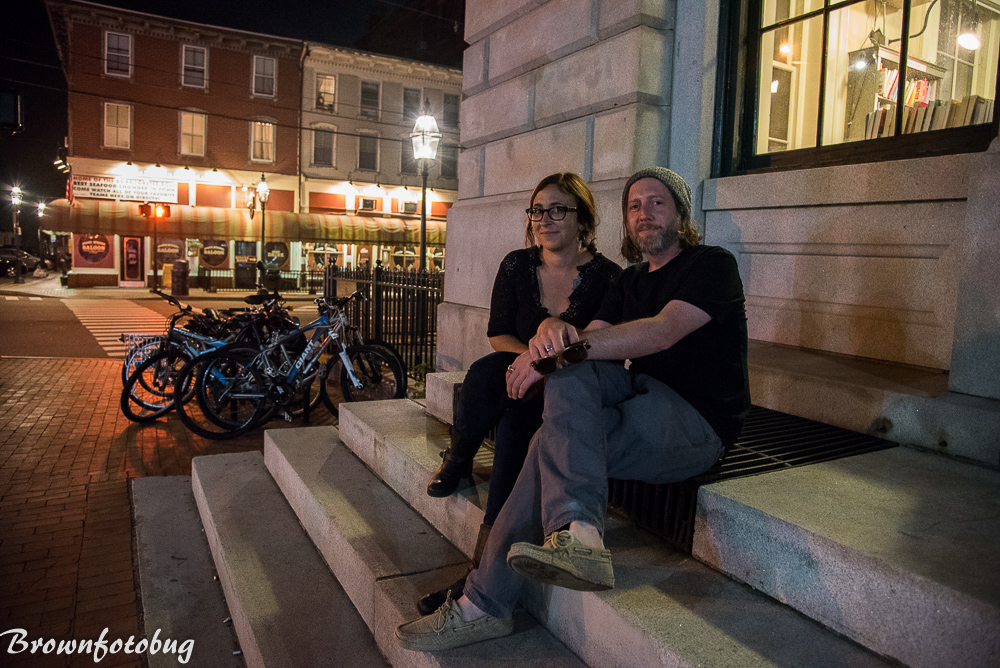 Travelling 3000 miles from home can be pretty daunting.  Unless you’re doing what you absolutely love.  And that exudes from every ounce of Planes on Paper.  SMI’s Arlene Brown caught up with them at the Portsmouth Book and Bar, a very unique and popular hang out in a historic Portsmouth, New Hampshire.  Navid and Jen, from Yakima, are traveling across the country, but mostly New England and the east coast doing acoustic versions of their 2 albums, The East End and their newest The Ruins.

Who knew that a book store could also be a bar, restaurant, and live music venue?  Who knew that all of those books would help the 300 year old building where the Book & Bar is located have amazing sound and resonance?  It could also be that Jen and Navid make beautiful folk music together.  Approximately 80 people seated around tables, the bar, and bookshelves were swooned in by the hauntingly beautiful melodies and harmonies.  Most seasoned folk music fans are familiar with their goosepimple raising vocals.  But it’s refreshing and awe inspiring for newcomers as well.  Sitting there listening to them sing was very reminiscent of nights in Seattle surrounded by close friends.  Granted only one person in the room snickered at the line “One for King County Jail” in their very popular song “Day Alone.”

Most of their shows have been in small intimate places on their own.  But tonight they opened for Christopher Paul Stelling, another very fast up and coming pop folk music singer.  His voice, range, guitar skills, and personality are addictive.  He is also touring right now with his brand new fiancé, Julia Christgau, who also has a beautiful set of lungs.  His new album Labor Against Waste is easily one you can listen to day and night on repeat.  He will also be in Seattle this fall, so make sure to see him when he’s there.

The east coast has been good to Planes on Paper.  The folk music family has embraced them here and has been touched by their music and these two very sweet people.  And vice versa.  So much love for their music was shared by all in Portsmouth and the whole east coast..  When Jen and Navid are back in Seattle, give them a hug for us out here on the east coast.

Planes on Paper play The Tractor Tavern on September 3rd with The Marshall McLean Band and Matty Gervais supporting.

Arlene Brown is both a writer and photographer for SMI. She likes to take things one picture at a time. Covering and reviewing shows from Soundgarden, The Proclaimers, Lorde, The Head & The Heart, to Hank3, Bob Log III, New Politics, Black Joe Lewis, Grouplove, including local and national rising bands and more, she truly loves to try to get that perfect shot. Looking for that raw emotion, energy, power that only live music can deliver, she captures the essence of a show in her own unique style.
Related Items#SMIonTourArlene BrownChristopher Paul StellingFeaturefolk musicJen BorstJulia ChristgauNavid ElliotPlanes on PaperPortsmouth Book & BarSMI on Tour
← Previous Story The Hot Seat: Yogi Paliwal
Next Story → Au Revoir at The Rendezvous: Shark The Herald