By Kriston McConnell on August 12, 2015@Kristonisms 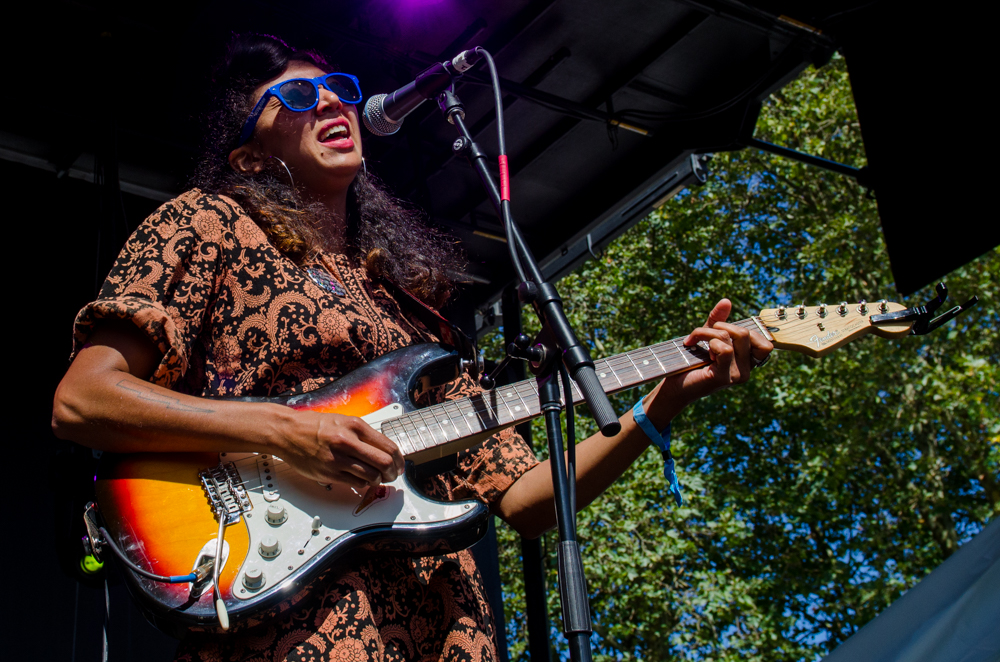 La Luz have been tearing up the Seattle music scene since 2012, and it seems that lately they are finally receiving the widespread recognition they deserve. Due in part to their passion, commitment, and musical talent, the four women who make up La Luz have launched their band into the national spotlight. They’ve toured all over the country, as well as in many cities outside of the United States – including a very chilly Iceland this last November for the Iceland Airwaves Music Festival.

Last Friday, The Showbox Market hosted La Luz’s CD release show for their new album, Weirdo Shrine. The album is something that fans have been anxiously awaiting to hear, as it’s their first effort since the car accident that totaled their van in 2013. The event left an impression on the band, and as is the case with most musicians, they drew inspiration from their experience and funneled that energy into a kickass new album.

The night kicked off with local rock outfit Will Sprott. Originally hailing from San Jose, California, the band offers up some mellow indie rock to warm up the crowd. The group has performed with La Luz on many other occasions, so fans of the band are familiar with this group as well. The next act to hit the stage was surf-rock quartet Guantanamo Baywatch. Their sound was a bit more upbeat, and it held together with loads of reverb. This was an awesome band to prep fans for La Luz.

After about two hours, La Luz finally hit the stage. The crowd, which by this time had almost completely filled The Showbox, went a little crazy. The ladies have a great stage presence, and know exactly how to channel their fan’s energy. They have a fierceness and purpose behind every move they make when they perform, which is something that makes their shows enjoyable to watch.

La Luz kicked off their set with an old fan favorite, “Big Big Blood,” off their album, It’s Alive. It was a nice, relatively mellow track to kick off the evening. During their set, instead of having a soul train dance line, which is what they usually do, they asked fans to crowd surf. They laughed and exclaimed they had never asked fans to crowd surf before, but they wanted to see if fans would go for it. As soon as the music started, a handful of brave souls were lifted up into the air and passed forward to the front of the stage. By the end of the song, a dozen or more concertgoers got to experience the exhilaration of being carried by strangers and tossed on to the stage.

A few songs into the set, Shana Cleveland took a moment to dedicate the next song, “Sure As Spring,” to Rudy, their youngest fan. The set ended with the track, “You Can Never Know,” which is also taken from It’s Alive. After exiting the stage though, fans chanted “Encore!” and the band made their way back to the stage to enthusiastically perform three more songs.

Overall, it was a great show. La Luz are always great performers, but there was a certain energy in the room that brought everyone to life. Weirdo Shrine is a new milestone in their career, and it won’t be the last. Both digital and physical copies of the album are available for purchase through Bandcamp.

Kriston began her writing career as a passionate music fan. She attended dozens of shows, purchased CDs, vinyl and even cassette tapes of artists she barely even heard of. Shortly after joining a band's street team she happened to meet blogger Jacob Tender (now with Alternative Press) who asked her to write for his blog. After a couple of months he joined the staff of Under The Gun Review, and brought her along for the ride. After spending four years as a major contributor to the publication she moved on to be a web content contributor for New Noise Magazine, whose print magazines have a national reach.
Related ItemsChristine MitchellFeatureGuantanamo BaywatchKriston McConnellLa LuzWill Sprott
← Previous Story Sundries Record Release Party at The Piranha Shop
Next Story → Wilco Brings Their 20th Anniversary Parade to Marymoor Park