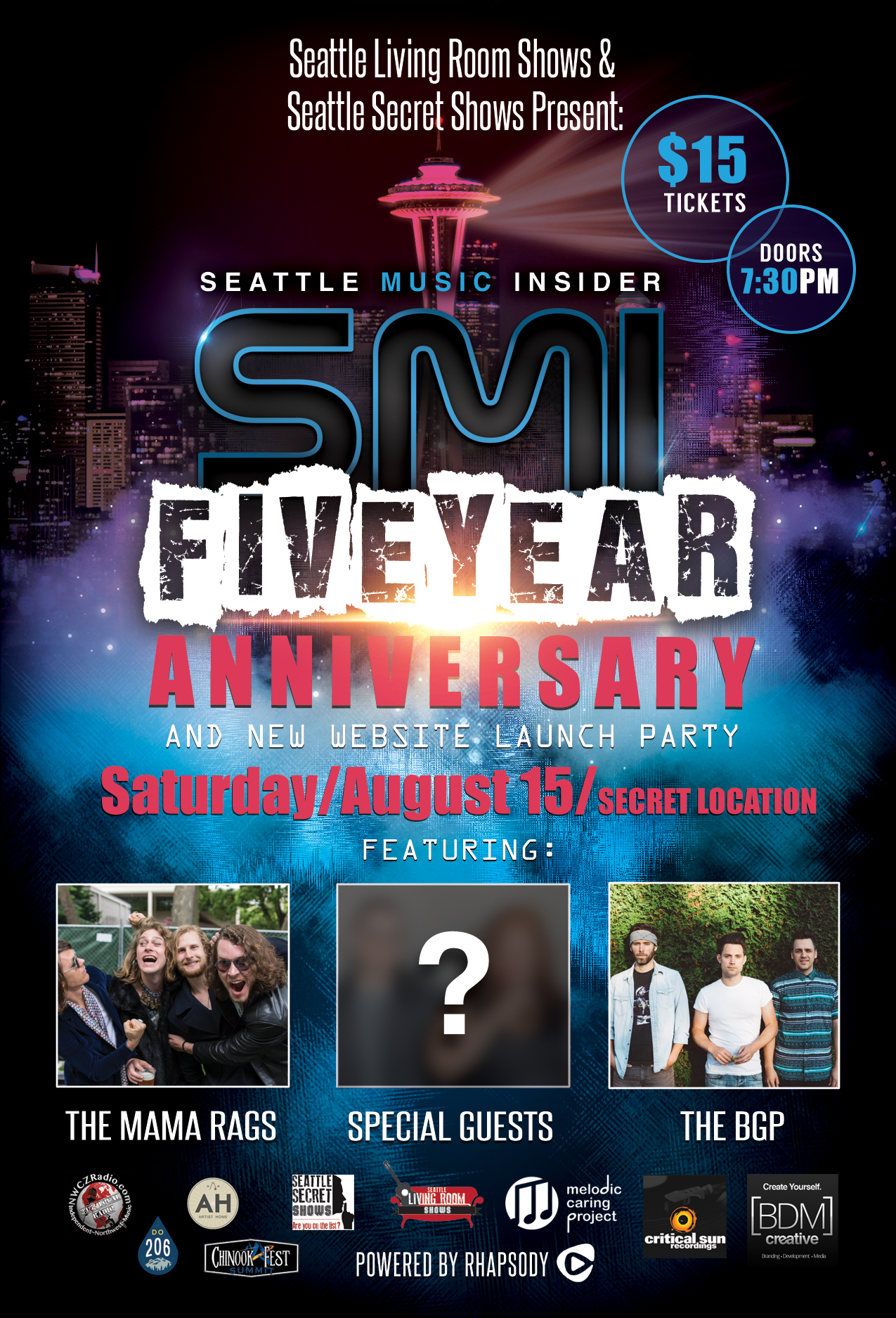 It is hard to believe how fast five years goes by. The older we get the faster time flies. Perhaps it is that our relation to time changes as we grow older. When I was five years old, one year was only one fifth of my life, and now one year is . . . well, I think you know where I am going here.

When SMI started, it was just me and it was really about six years ago. It started as a Facebook page. I was writing music reviews for Axis Entertainment and I just wanted to come up with some type of simple moniker so that I could promote my articles and photos. I had a name, so I figured, why not create a logo, and SMI was born. I really had no idea what I wanted it to be, but I thought it was kind of a neat idea. As a music journalist, I thought it would be cool to start incorporating my photos, interviews and video content.

Many journalists cover music from the outside looking in.  As a musician myself and someone that has toiled into the wee hours into the morning in a studio writing and recording music and being someone who has stood on stage and performed in front of thousands of people I wanted to do the opposite and cover music from the inside out. I would take my little HD camera to local music events and start interviewing artist and taking fans inside the dressing rooms, back stage, on stage – any where they physically could not go. The other reason I chose the name Seattle Music Insider was because of the passion for the music that lives inside us all.

I was raised on radio. I love it so much I thought I would make it a career. So I joined the military and submitted an audition cassette to see if I could get into military broadcasting school. They thought I was trainable, so they accepted me into the program. After basic training, I attended the Defense Information School to train to be a DJ for the Armed Forces Network. I met a girl, fell in love, and got sidetracked and ended up being a military legal specialist. Not as sexy as radio, but at least I could stay stateside. Well, the relationship didn’t work out, so my dream of being in radio and my dream girl were no more.

Jump ahead a few decades…I would end up guesting on other radio shows and even had a chance to report for KOMO Radio providing highlights of Bumbershoot. With the advent of podcasting, it was possible for me to produce my own “radio show” or podcast, and SMI Radio was born. My early shows were crude but decent. My first guest was a Seattle outfit called Eldridge Gravy and the Court Supreme. What was once a dream as a youth is now being fulfilled in a different way.

I had photos, written articles, video content, and now a podcast. In April of 2010, I launched a website to centralize all of my content. I was still contributing to other publications, but it was kind of cool to have my own thing and brand if you will. When it all started, SMI was just me – now SMI is us. We now have over 38 contributors covering various shows throughout the Northwest. We have some of the most talented photographers in the region and some talented writers to help tell the story. SMI Radio has grown from doing interviews and spinning tracks, to doing interviews and live in studio performances.

We wouldn’t be where we are today if it was not for the commitment and passion of the folks that have contributed in the last three years. The bigger SMI gets, the smaller I get, and that is just the way I always hoped it would be. When I started, I didn’t have a clear vision, I just knew that as a musician and music geek sitting on the floor and listening to records and reading the liner notes that music was my oxygen, happy place and one of the most powerful forces in the universe. I didn’t know where this thing would end up, I just always knew that I wanted to use my work, my limited talent, and passion to help foster our music scene and create community. It is our passion that drives us because it certainly isn’t the money!

After five years, I really feel that we are just getting started. There have been some growing pains, running a publication takes a lot of work. There are various personalities to work with and we are constantly working to improve the quality of what we do. The greater reach we have, the greater responsibility we have to maintain a solid level of journalistic integrity. We have lost some people along the way who did not adhere to our value system or standards.

I couldn’t have done without the help of people like very first editor, Jennifer Kaminer who helped set the bar in terms of our initial writing standard and whose voice you here on the wonderful liners for SMI Radio, our first contributors Jerry & Lois Levin and Mocha Charlie. Xander Deccio helped us run things when I was busy and my current SMI partner/Art Director/photo ninja, Jason Tang has brought his creative brilliance and drive to bring new content and take us to another level. We have an amazing current editor in Janice Deccio, a brilliant new assistant editor named Abby Williamson, and of course I would be remiss if I did not give a shout out to  the “wonder twins,” Christine Mitchell and Arlene Brown whose tireless passion and help have made running a publication like SMI so much more manageable (especially with a day gig!)

SMI has gone from a personal blog to a bloggy-looking fan site, to a more professional looking music publication. After three years of the same old-same old, I felt it was time for a reboot of the site. In June, we re-launched SMI with a new look, feel and attitude. We realized that at least 60% of folks that access content do it on mobile devices, so we redesigned, rebranded and relaunched the website so folks can access our cool content anywhere, anytime on any device.

It has been an amazing journey thus far but we really believe that the best is yet to come. The best part of the journey thus far has been the amazing and beautiful people we have met a long the way. For those that we have not met, we hope that you grab an E ticket on the A Train and jump on board and join us for the ride!

This Saturday, August 15, we are going to finally celebrate our birthday and new look with a party thrown at a secret location. The evening will be about celebrating our partnerships with Seattle Living Room Shows / Seattle Secret Shows, Melodic Caring Project, Critical Sun Recordings, Artist Home, Do 206, and broadcasted live via our partners, NWCZRadio.com and powered by Rhapsody Music.

Details for the event are here and you can purchase the tickets through Brown Paper Tickets.

There will be some incredible live music from artists we have interviewed and covered, The BGP, The Mama Rags and a duo that must go unnamed because of some type of blackout clause, but they will send you flying over the moon in grand splendor. In addition, we will have some very cool raffle prizes so bring your wallets or stop off at the ATM before you arrive!

We will take time out to thank all of the folks who have contributed the last few years, but most of all we will want to thank you because without you we are just a bunch of hacks sitting in a room talking and writing to ourselves, and that ain’t no fun!  We hope to see you there. In the meantime, we invite you to take a couple minutes out to view this short video that Jason and I worked on that encapsulates what we are all about.

Not only is he a multi-media journalist, he is also an accomplished musician. He is the founder of SMI and drives the creative look, feel and branding for the publication. His years of writing, arranging, and performing live music in a variety of genres inform his ability to communicate the message and the mechanics of music. Roth’s work on SMI reflects his philosophy that music is the universal language, and builds community. He believes it has the power to unite people of every race, religion, gender, and persuasion.
Related ItemsArlene BrownArtist HomeChristine MitchellCritical Sun RecordingDo 206FeatureGreg RothJanice DeccioJason TangMelodic Caring ProjectMocha CharlieNWCZ RadioRhapsody MusicSeattle Living Room ShowsSeattle Music InsiderSeattle Secret ShowsSMISMI RadioThe BGPThe Mama RagsXander Deccio
← Previous Story Preview: Project Pabst – July 18 & 19
Next Story → Seattle Acoustic Festival Unplugs for 2nd Year