The Hoot Hoots come aboard

By Christine Mitchell on August 25, 2015@Housetornado37 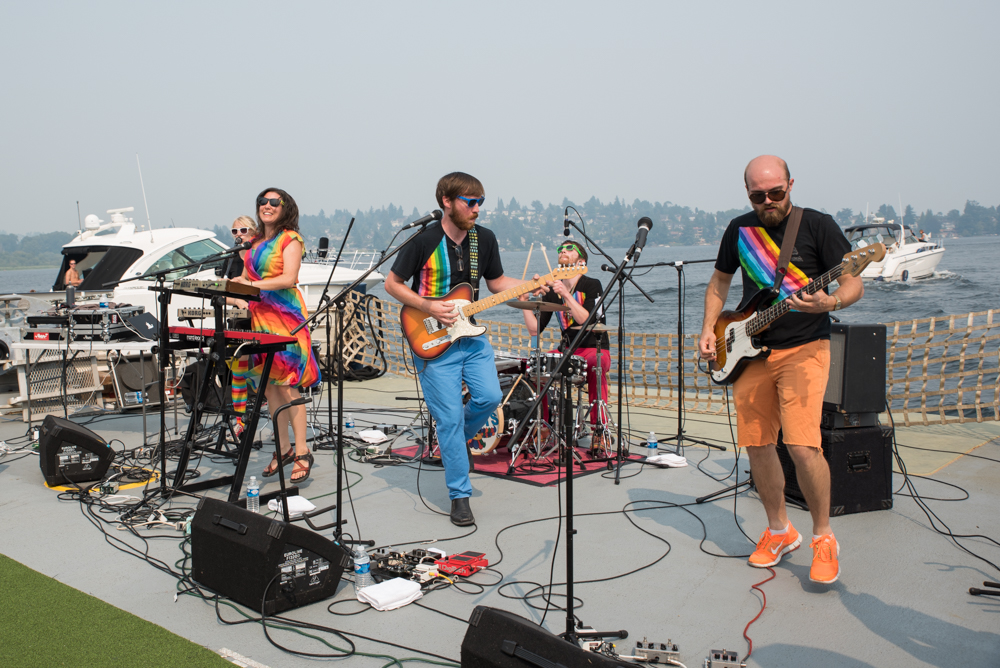 The best part of being on a boat is seeing things from a new perspective. Sun drenched days viewed from the center of a lake seem more transcendent, your beer/wine tastes a little better, and music becomes pervasive as it races over wavetops. The Hoot Hoots’ two sets played on Lake Union and Lake Washington aboard the Trek on Sunday were undoubtedly made more special by the floating location. The band members themselves were struck by the spectacle of cruising under the Ship Canal, University, and Montlake bridges, at times staring up and around at the scenery and commenting in wonder.

The Hoot Hoots spread their happy music far and wide. Canoeists pumped their paddles as they went by, and shirtless men danced on sailboats. Argosy cruises passed by the ungainly Trek, and the looks on the tourists’ faces were ones of jealousy. I wish I were on THAT boat. In its previous life the Trek appeared to have been a very small scale ferry, but today it served as a party boat. The Hoot Hoots took full advantage of this as band members took breaks from their instruments to dance with the crowd to their own tunes.

The band covered their various EPs and albums and extended into the future with a couple of new songs. The generally fast pace of the music kept the dancing going even when the subject matter tended to darker subjects, as in “Hands of the Dead.” Keyboardist Christina Ellis punctuated lyrics with hilarious facial expressions, vogueing, and pogos. The rest of the band had their own goofy quirks, from bassist Geoff Brown’s death metal face to drummer Chris Prairie’s stacked owl necklaces and permanently radiant grin. Singer/guitarist Adam Prairie acted as the anchor to this whirlygig as he sung about superheros,  Adventure Time, and environmentalism, with most of these topics funneled through the lens of blippy video game soundtracks. This package came wrapped in literal rainbows, with Ellis sporting a dress, the men t-shirts with rainbow appliques, and the new “secret Hoot” (who assisted on keys and percussion) wearing  rainbow-striped knee socks. Part of what makes The Hoot Hoots a great live band is that they are having fun together and it shows. Pair that with a mountain of catchy, smart pop-punk-rock songs and it’s a winning hand.

DJ Indica Jones provided non stop, danceable ’80s and ’90s hits to and from the dock and also during The Hoot Hoots’ intermission. The crowd was more than happy to dance and sing along to songs they knew by heart, and Jones himself was just as enthusiastic.

This third cruise put on by Seattle Secret Shows/Seattle Living Room Shows duo Kristen and Carrie Watt was a spectacular reason to get on their email list. It was just the latest in a series of can’t-miss shows in creative locations.

Christine Mitchell has been poring over album liner notes pretty much since she acquired the skill of reading, and figured out the basic structure of rock songs at an early age. Whether it’s the needle popping into the first groove of the record, the beeps that signal the beginning (or end) of a cassette tape, or digital numbers ticking off the seconds from zero, music brings Christine happiness, ponderous thought, opportunities for almost scientific study, and sometimes a few tears. When she started attending live shows two decades ago, a whole new piece of the puzzle clicked in and she has been hooked ever since.
Related ItemsChristine MitchellDJ Indica JonesFeatureLake UnionSeattle Living Room ShowsSeattle Secret ShowsThe Hoot Hoots
← Previous Story Seattle Secret Shows Delivers Local Favorites At SAM Remix
Next Story → Chinook Fest Central: How Central Washington Parties