By Robin Fairbanks on August 27, 2015@robinfairbanks 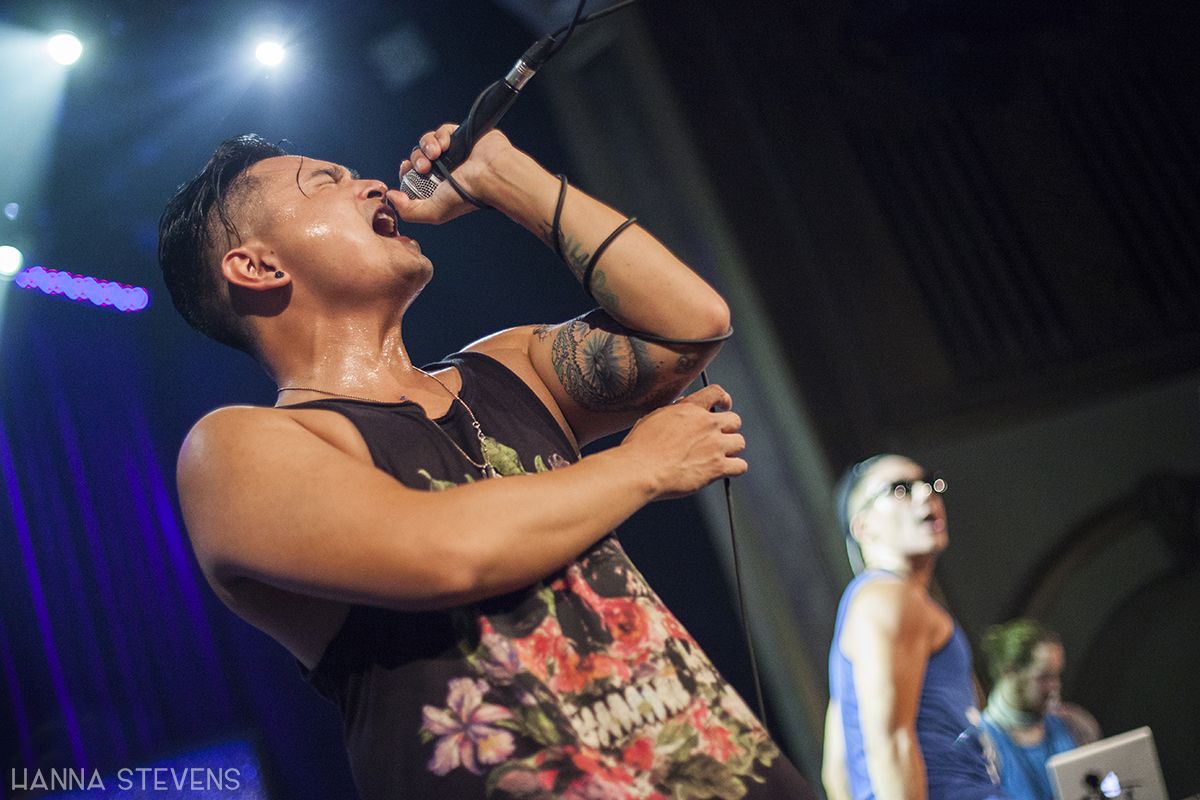 On Friday, August 14, Lions Ambition entered the Neptune Stage like they were shot out of a cannon. Wheaties should put these guys on their box. The band has always been known for their high energy show and devoted Larry the Lion fans, and Larry was workin the room from the moment the doors opened – at the photo booth and the dance floor – with a bevy of beauties by his side the entire night.

It had been pouring rain just before the doors opened, but there was a line of diehard giggling fans outside an hour before the show, thirsty for new music and ready to party with their boys (and lion.) They had money in hand to burn as they chit-chatted about what they would buy at the merch booth. Like most boy bands, Lions Ambition has a fairly young female base of fans, Asian concentrated, and the ladies were dressed to impress.

DJ Marcus D, provided the beats and got the Neptune crowd moving. The show opened with comedian Bri Pruett of Portland. Willamette Week named her one of the Funniest 5 Comedians in Portland. Pruett entertained the crowd with short sets between bands and acted as MC. Every comic knows they need to set the tone of the show, control the show, and read their audience and adjust their set accordingly. Pruett’s material may have been lost on the young chatty crowd, their attention span very short. Jokes about school, young love, driving, texting, and boys, might have been more age appropriate. Pruett has great credentials on her site and likely slays in an over 21+ club, so catch her at a comedy club.

First up, Peacemaker Nation served up a groove and good feelings as they spread their special brand of love, peace, and community through a blend of soul, pop, hip/hop, rock. Their harmonies are a trademark, and they later returned to the stage to back artist, Megan Wilde.

Young seven-piece band Bella Farinas, fronted by 19 year-old blues vocalist Bella, shows promise. She is being mentored by some Seattle music heavyweights who see her as a diamond in the rough. This will be a band to watch as they mature and get some time under their belts to develop their sound/stage show and writing chops. They should become a favorite on the All-Ages Scene for creating smart, sophisticated music.

Those who want to make a statement, wear leopard, which is exactly what pop/soul diva Megan Wilde sauntered out in. Wilde demands attention, and the young crowd got excited from the moment she walked on stage with tambourine in hand to a sultry guitar riff. She smoked the stage with soul/pop but cooled it down to a slow burn with some inspiring ballads. Peacemaker Nation joined her onstage for a beautiful rendition of “This Time,” and Wilde did a fun call and response with the crowd on “Bad Bad Woman.” Wilde has arrived in Seattle, and even the kids dig her!

After four acts, one wonders if the crowd had anything left for a fifth, but when the fifth act is Lion’s Ambition, energy is not a problem. The group consists of a four piece band fronted by a lead singer, and two rappers handling verse/rhymes. Band members are: Richard Austria, Frankie Starr, Marlon Turner, Sam Balaoing, Dustin Alhakim, James Lobbett, and Ken Jose.

Lions Ambition has always maintained a sound that is youthful and radio-friendly. Their energy is contagious and they rarely quit smiling during the show. They seemed to be loving every moment they were entertaining the crowd. The new 10-track album Romantic Comedy, has been eagerly awaited and is full of youthful rock anthems. Lions took their time as this project and show was solely funded by the band themselves, no manager, promoter, Kickstarter, or sponsor. They’ve heavily invested over the years into their careers and this album is a celebration of their story of past and present. Romantic Comedy was recorded in their home studio and mixed by their producer, Joe La Rosee of Jupiter Studios, Seattle, who sprinkled some magic dust to give it that million dollar sound. The adorable cartoon caricature cd artwork by Siya Oum makes it highly collectible.

The crowd was so with the band, they ate up everything they offered. The new song, “Sick Day” is very The End Summer Camp sounding, and it should strike a chord in anyone who has ever called in sick when they were really playing hooky. A fun song that was enhanced by the throngs of glowing light tubes bobbing and weaving in unison. “Pillow,”  which they consider their kickoff project song, might get them some radio traction.

Lions Ambition plans to continue their college tour and festival schedule as well as shopping labels. The college market has been good to the boys and they’re best on big stages. Romantic Comedy is available on CD Baby, Amazon, and their website. Watch for it to be added to iTunes soon.

Robin Fairbanks has spent 30+ years in the Music Industry in many capacities. Working in the Seattle music scene since 2006 as a Manager/Booker, she’s known for her ethics and artist development skills. Robin has guided the careers of many, but most notable as the former Manager of Seattle Garage/Blues band Fox and The Law for 3.5 years. Robin has spent the last 2 yrs consulting with Artists who seek her help as a Music Consultant and Publicist with Setlist Music Solutions LLC. She also gives of her time as an advisor to Seattle Wave Radio, an Internet music station where she helped shape its sound as the ROCK Channel Music Director for 2+ yrs upon its launch in 2010 and where you’ll find her music blog, “Bird On A Wire“. In 2014, Robin also worked as a Contributing Music Writer for Guerrilla Candy.
Related ItemsBella FarinasBri PruettFeatureHanna StevensLions AmbitionMarcus DMegan WildePeacemaker NationRobin FairbanksThe Neptune TheatreTravis Atreo
← Previous Story Watkins Family Hour takes over the Tractor
Next Story → Slipknot Headlines Massive Pain In The Grass Line-Up