Modest Mouse kicks off two nights at the Paramount 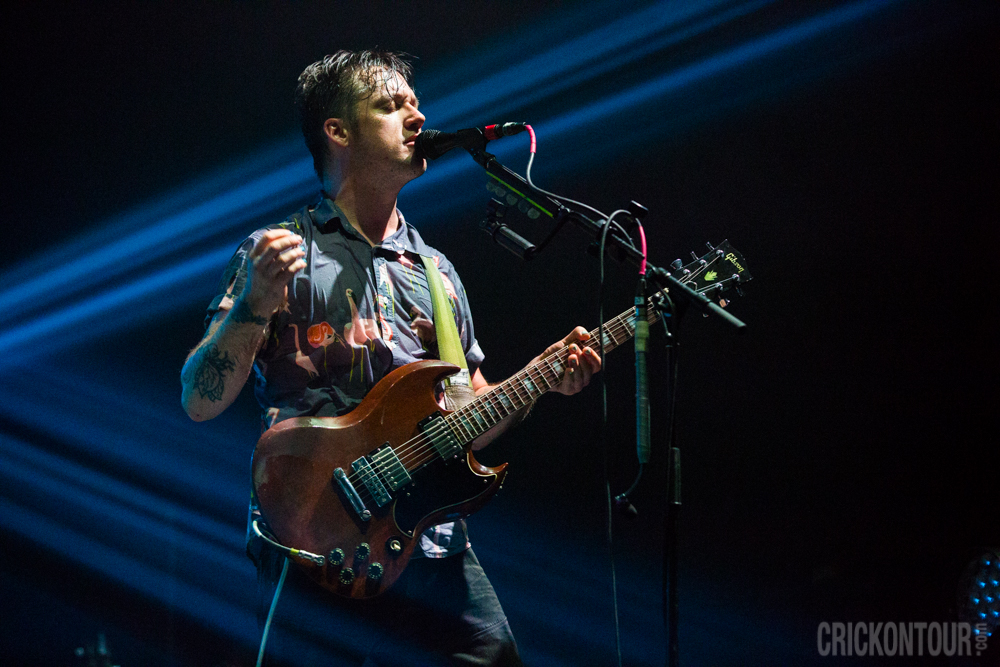 Coming off of their newest album Strangers To Ourselves, Modest Mouse started their two-night residency at the Paramount last Monday, answering the question on everyone’s minds, “Where the heck has Modest Mouse been?”

From the looks of it, they’ve spent the last eight years cultivating a more polished sound, with a large team made of mostly new band members. And, while there might have been more musicians than some fans deemed necessary, front man Isaac Brock still retained his same zany stage presence, crazy eyes and all.

The crowd was made up of a good array of fans – people who lost their minds for “Float On,” and people who stood by slightly annoyed by the people that lost their minds for “Float On.” Modest Mouse managed to please everyone, playing some new songs off Strangers to Ourselves, like “Lampshades On Fire” and “The Tortoise and the Tourist,” to name just a couple. Brock brought out the banjo too, for 2009’s “King Rat.” However, they even went as far back as 1997 with “Cowboy Dan” from The Lonesome Crowded West. A girl standing nearby couldn’t contain her excitement when that track started.

“They haven’t played that song in so long, I never would have expected them to play it, I’m so happy!” she said.

To close the main set, they went deep into the history books for “Night On The Sun,” off an EP released in Japan in 1999. It killed. Then after what seemed like a decade of flashing lights on stage, the band came back out for an encore, with Brock wearing a different bird shirt – this time sporting ducks instead of flamingos. Clearly his one-time cameo in Portlandia rubbed off, so he felt the need to “put a bird on it.”

The encore was all We Were Dead Before The Ship Even Sank, with “Fire It Up,” followed by an epic 10-minute version of “Spitting Venom.” And then it was almost 11 p.m. They started at 9 p.m. and played for just short of two hours, and the crowd was happy. But once the encore was over, the lights didn’t go up. The Paramount was still dim, which meant that it wasn’t over. The security guard standing up front started telling people to “keeping clapping” after receiving some correspondence on his walkie talkie. So we kept clapping, while all the people in the balcony started to leave, but then the lights finally went up.

“They were going to come back out, but too many people left,” he said, somewhat disappointed.

Even with the lost hope of a second encore, Modest Mouse played a phenomenal set, proving that a band that’s been around for over 20 years can still be on top of their game, without any help from nostalgia. They were polished, well rested, and seasoned, but just as strange as they’ve always been. Welcome back, Modest Mouse, and here’s to the next 20 years.

Abby Williamson is a photographer, writer, and video blogger with a passion for live music – especially the local scene. She recently moved to Seattle after commuting from Gig Harbor for shows an average of once a week for five years, so she’s happy to not have to drive as much and photograph even more concerts! When she’s not elbowing her way up to the front row at a show or sorting through thousands of photos of those shows, Abby also does freelance wedding photography, all the while cultivating a decent-sized following on YouTube. Abby has contributed to several music blogs over the last five years (and she’s really excited to join the SMI team!), and has been published in at least one album booklet for the band, Someone Still Loves You Boris Yeltsin. She would like people to know that while music photography and writing is a huge passion in her life – she is a fan first, photographer second.
Related ItemsAbby WilliamsonAlex CrickFeatureisaac brockMimicking BirdsModest MouseParamount Theater
← Previous Story Slipknot Headlines Massive Pain In The Grass Line-Up
Next Story → Ghost goes acoustic at Silver Platters