By Christine Mitchell on September 2, 2015@Housetornado37 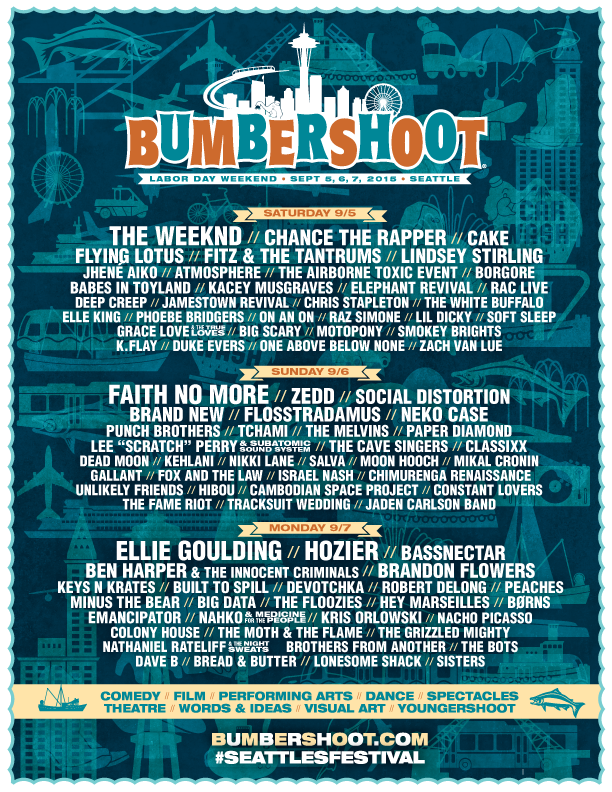 Bumbershoot is back this Labor Day weekend in all of its sprawling majesty, its various tentacles still thriving and offering up various ways of ingesting arts and entertainment. After some time off, even the KeyArena is getting back into the act, most notably serving up some Peaches. The weather looks to be better than last year’s drizzle, making Memorial Stadium acts such as Faith No More, The Weeknd, and Ellie Goulding sure bets. Local acts receive representation on stage as well, with Dead Moon and The Melvins amazingly getting the Memorial Stage treatment, and tons of current local acts such as Duke Evers, SISTERS, The Fame Riot, and The Grizzled Mighty peppering the schedule with PNW goodness. Of particular note is the resurrection of Babes In Toyland on the #NeverTamed Stage at Fisher Green; that’s going to be interesting, people.

From a comedy standpoint, one woman rises head and shoulders (and cleavage) above the rest: Bridget Everett. Those who haven’t heard of her . . . um, should sit close to the stage and learn just how far the rules of “audience participation” can be bent.

Besides the feasting of your eyes on films from One Reel and/or laser shows at Pacific Science Center (Dark Side of the Moon, anyone?), you can take home specialty poster artwork at Flatstock in the Armory from silkscreen masters.

This is just a taste of what will be available, and if it is making your head spin, never fear. Just download the Bumbershoot App on your phone and you’ll get sorted out in no time, maps and all.

Here’s a video with the lineup:

Christine Mitchell has been poring over album liner notes pretty much since she acquired the skill of reading, and figured out the basic structure of rock songs at an early age. Whether it’s the needle popping into the first groove of the record, the beeps that signal the beginning (or end) of a cassette tape, or digital numbers ticking off the seconds from zero, music brings Christine happiness, ponderous thought, opportunities for almost scientific study, and sometimes a few tears. When she started attending live shows two decades ago, a whole new piece of the puzzle clicked in and she has been hooked ever since.
Related ItemsBabes In ToylandBridget EverettBumbershootChristine MitchellDead MoonDuke EversEllie GouldingFaith No MoreFeatureKeyArenaOne ReelPacific Science CenterPeachesSISTERSThe Fame RiotThe Grizzled MightyThe MelvinsThe Weeknd
← Previous Story Fans Flock to Final Date on 2015 Vans Warped Tour
Next Story → Bumbershoot Day 3