After a decade hiatus, Blackalicious returns to Seattle 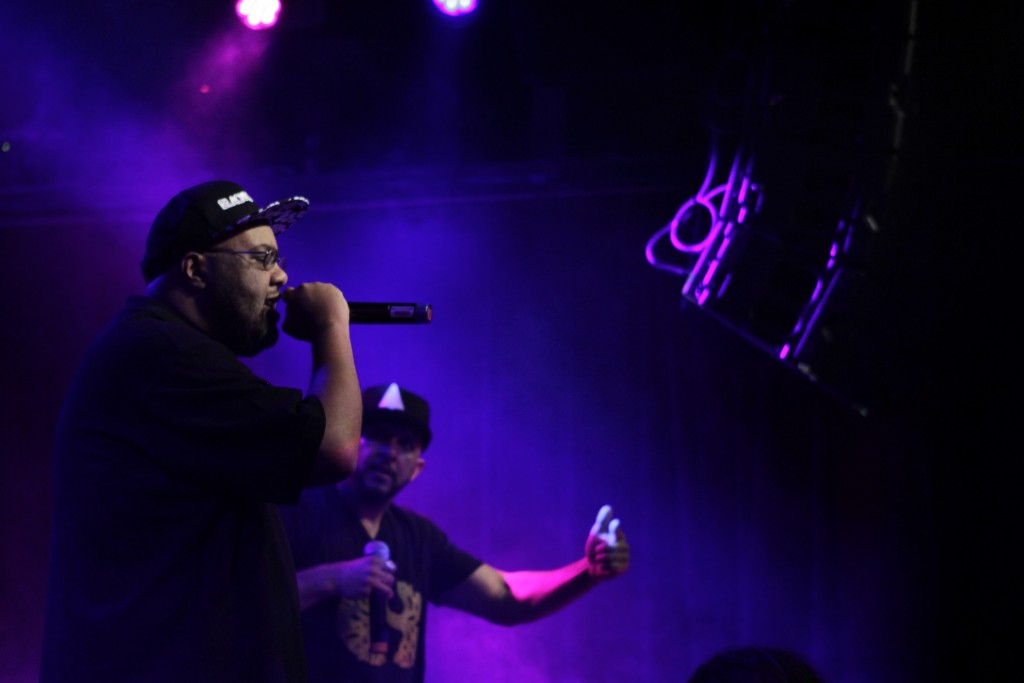 Masters, on the other hand, have also put in considerable work to become what they are; yet the effort is undetectable by the average lay person. When you see them in action, it’s jaw droppingly effortless.  Gift of Gab, the emcee half of Blackalicious, is one such artist. He is the quintessential emcee’s emcee . . . and the lucky crowd at Nuemos got to witness a true master at work.

DJ Indica Jones started things off right, playing a great set of old school and golden age rap tunes that got the growing crowd warmed up. It was a lot of fun watching Jones dance his ass off while spinning jams. Bobbing and twitching over the 1s and 2s like an manic funkateer, it was obvious he was having a blast up there.

This was followed by a very energetic set from Seattle’s own Spekulation. Recently praised for his productions of “Bout That Action” and “Home Of the Mighty,” Spek’s been a local to watch in the last year or so. It was apparent he’s no slouch on the mic either, deftly rhyming over the bombastics provided by his live band. Another hometown rapper-on-the-rise, Jamil Suleman joined Spek for a crowd pleasing cut that showed their easy chemistry on-stage. Once Paolo Escobar jumped onstage to perform “Home of the Mighty,” the crowd got amped. At one point during the song, Escobar let out a primal church howl that was quite awesome to behold. We will be hearing more from this vocalist.

Portland’s Vursatyl then came on and won over the venue with his showmanship and witty crowd work. Fresh off a new release, Vursatyl more than holds his own on the mic, and treated the crowd with several displays of rhyme skill that had the crowd hollering for more. It turns out he’s also a pretty good singer.

By the time Blackalicious hit the stage, the crowd was primed. Gift didn’t waste any time either, launching into “Blacka,” the opener off Imani Vol 1, their new LP. Gift then cruised over familiar selections from previous classics, The Craft, Blazing Arrow and Nia, that his core fans in the crowd ate up en masse.

It was astonishing to see the level of breath control Gift still possesses despite having survived recent kidney failure and dialysis three times-per-week. There were a few times Gift had to rest on a chair on stage while watching his Quannum Projects cohorts (Lateef The Truthspeaker, Jumbo and Vursatyl) wreck shop while he reserved energy between songs. He went instantly back in alpha-rap mode whenever he touched the mic, however, with particularly dazzling performances of “On Fire Tonight” and “Alpha and Omega” off the new album. After the sound tech adjusted Gift’s mic volume (it had been a little low the first half of the set), the Quannum crew hopped onstage to launch into a 12-minute freestyle mini-set, with each emcee showing off their skill at improvised rhyme. Gift won MVP here by rhyming off the top of his head non stop for at least five minutes, bending and molding verbiage at will, switching deliveries like an auctioneer on amphetamines.

The night’s highlight came when Blackalicious launched into their seminal cut, “Make You Feel That Way.” The crowd roared when the opening sample hit the speakers, with everyone’s hand raised high and singing loudly along whenever the infectious chorus hit. Released in 2002, when Gen Xers were getting sick of how decadent rap had become, and Generation Y was becoming cognizant enough to appreciate their older siblings’ taste, “Make You Feel That Way” is a sleeper masterpiece that instantly gives one the warm and fuzzies whenever it comes on.  It’s just one of those songs.

With Seattle being the last stop on their current US tour, Blackalicious and the Quannum crew didn’t let road weariness detract them from putting on a fantastic hip hop performance that had more than a few rappers in the crowd taking notes.

Carradin Michel is a Seattle native who spent his youth constantly stealing his older brother's Maxell cassettes, all dubbed with rap music from LA and New York. Those early tapes, along with a weekly soundtrack provided by Nasty Ness's Rap Attack radio show, caused him to fall hard for Hip Hop music and it's culture. He believes the Pacific Northwest has one of the freshest hiphop scenes in the world and wants to shine a brighter spotlight on it by documenting it's rich talent.
Related ItemsBlackalicious in SeattleCarradin MichelFeatureGift of GabHip-HopImani Vol 1Indica JonesJustin DuerkoppLateef The TruthspeakerNuemosPaolo EscobarQuannumSeattle Music InsiderSpekulationVursatyl
← Previous Story Hollywood Undead’s Lively Showing
Next Story → New Band to Watch: Ayo Dot & The Uppercuts