Florence and the Machine Fills KeyArena with Giant Sound

By Alicia Kamenick on October 31, 2015@corianderstem 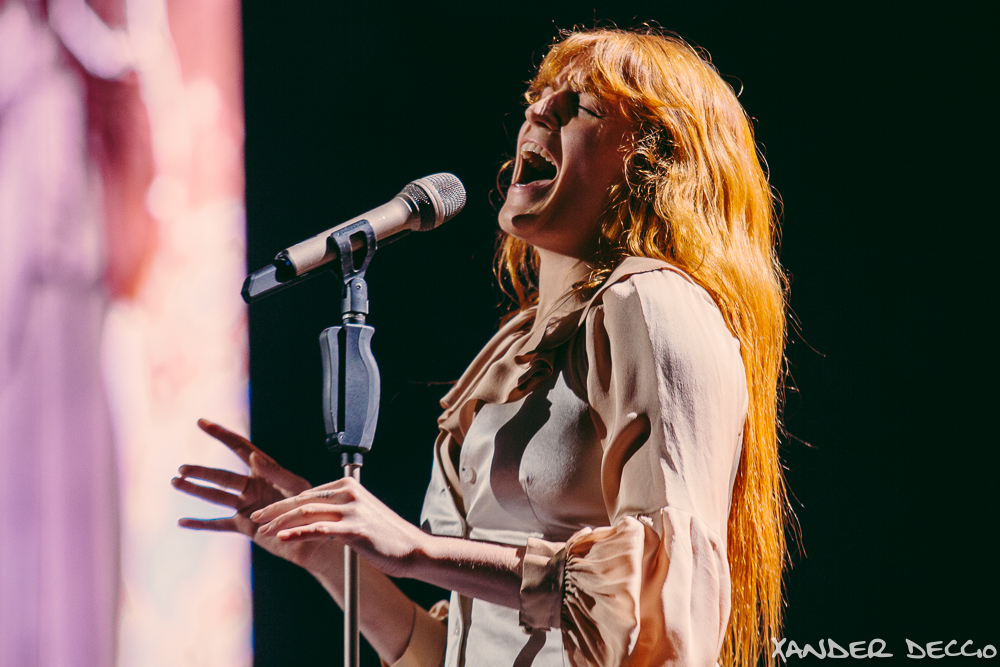 Whirligig Florence Welch is rarely standing still on stage. She runs, she jumps, she spins, she dances. Barefoot, full of energy with an enormous voice, the woman is a force of nature. During Tuesday’s Florence and the Machine concert at KeyArena, this reviewer did not once hear any evidence of the singer being the least bit out of breath. How does she do it?

Many in the audience might have been wondering the same thing, but likely didn’t dwell on it for very long – they were too busy jumping, clapping, singing, or stripping (more on that in a bit).

Audience participation was key throughout the show. Welch handed out flowers to people in the front row as she made her way to the stage. She exhorted the crowd to be her choir, after explaining that her own “choir” had gotten too wasted the night before. “You know how choirs are!” She ran to the opposite end of the arena to sing the end of “Rabbit Heart (Raise It Up)” in the seats there. She even got the entire audience to put their phones away for just one song – someone should look into creating a new Nobel Prize category for her.

During the main set closer “Dog Days Are Over,” while the crowd clapped in unison, she instructed everyone to remove something and wave it over their heads. A few shirts and scarves appeared, but when people started throwing things onstage, there was more than one bra in the mix. Welch picked up each piece and added it to the pile of clothes she whipped around over her own head.

While Welch is the focal point throughout the show, her cast-of-thousands band pounded drums, blasted horns, plucked at the harp, added their voices and so on, their big sound matching the big voice. Welch’s famous voice is so big and belty, that it’s a surprising contrast to hear her light, breathy speaking voice.

An absence of the big sound led to one of the evening’s highlights, a hushed and delicate “Cosmic Love.” At one point during a dramatic pause, there were a few seconds where the only sound in the venue was the whirr of the air vents.

It’s no surprise that the show is sprinkled with moments of drama, not only from Welch’s voice, but from her movements. During “How Big, How Blue, How Beautiful,” she threw crazy dance moves, creating giant shadows over the far end of the arena. For the finale of “Drumming Song,” she dropped to the floor before dragging herself across the stage (pity her poor white, satin jumpsuit)!

Sean Lennon’s (yes, that Sean Lennon) band The Ghost of a Saber Toothed Tiger opened the show with their mix of psychedelic rock and pretty pop harmonies. The last time they were in Seattle, they played at the Crocodile. “A slightly smaller venue,” Lennon laughed.

Alicia is a Midwest transplant who loves Seattle but misses thunderstorms. Her musical obsessions began when her coolest aunt gave her a copy of K-Tel’s Rock 80 album for Christmas when she was 7. She spent many years studying piano and voice, but the force of rock and roll won, so while she still sings in a local chorale, her true musical passions lie more with The Beatles than with Beethoven. When she’s not working at her job in HR, she can be found singing bad pop songs at the top of her lungs … although sometimes she does that
Related ItemsAlicia KamenickFeatureFlorence and the MachineKeyArenaThe Ghost of a Saber Toothed TigerXander Deccio
← Previous Story Joan Armatrading Says Farewell
Next Story → Mac DeMarco Older, Wiser, and Wilder at the Moore Theater