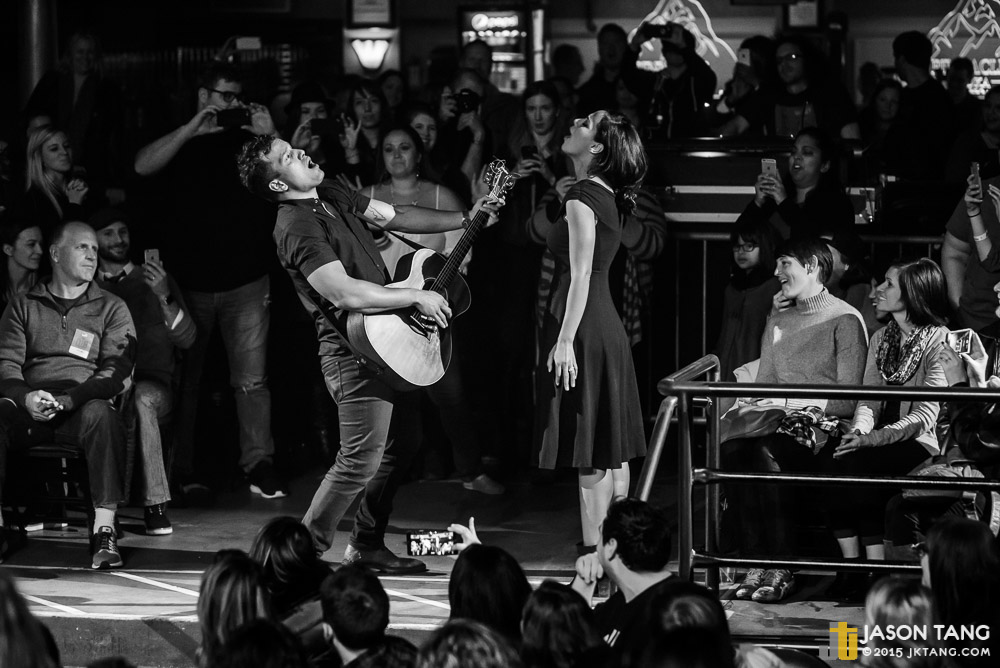 If there were ever a couple who look like they should be together it is Amanda Sudano and Abner Ramirez. This attractive husband and wife duo look like they could almost be brother and sister. It is when Sudano and Ramirez do their thing musically that one really gets the rich and deep artistic, spiritual and emotional connection these two share in rehearsals, in the studio on stage or in the comfort of their homes.

Throughout the set, Sudano and Ramirez showed off their individual vocal chops but it is when these two musical kindred spirits sing together the magic really happens. Their vocal blend create a unique and singular sound that is theirs only. A perfect example was a stripped down, yet powerful performance of the title track from Diamonds.

When watching and listening to Johnnyswim, it became clearly apparent that this couple love their work and love working together. At times Sudano and Ramirez were swept up in the music and love they share through the music they create and perform.

One of the highlights of the evening was when Sudano joined the audience on the Neptune floor for a little show right in the middle of the appreciative crowd. Johnnyswim write and compose intricate and complex songs with a pop sensibility that defy categorization. In a live setting, they deliver the goods and have a dandy time while doing so.

Opening for Johnnyswim was Shelby Earl, who put on one of her last public performances in a while. The roots/rock folk chanteuse will go underground to work on her next record. Earl performed a brilliant set with just her powerful and beautiful voice and guitar on full display.

Johnnyswim are currently on “A Johnny Swim Christmas” Tour.  Last year, the duo was selected as VH1 Artist You Oughta Know and they performed with Rock and Soul legend, Daryl Hall on Live From Daryl’s House.  They also released the brilliant, Diamonds, and the world was introduced to an amazing duo with a refreshing and unique sound.

Prior to the Seattle show at the Neptune, I had the opportunity to sit down prior to the show to talk with Sudano and Ramirez about how they met and the cultivation of their personal and professional relationship.  Also, later in SMI Radio XTRA, Johnnyswim talks about some exciting things they have coming up in early 2016.

To listen to the interview click the player below.

Not only is he a multi-media journalist, he is also an accomplished musician. He is the founder of SMI and drives the creative look, feel and branding for the publication. His years of writing, arranging, and performing live music in a variety of genres inform his ability to communicate the message and the mechanics of music. Roth’s work on SMI reflects his philosophy that music is the universal language, and builds community. He believes it has the power to unite people of every race, religion, gender, and persuasion.
Related ItemsFeatureGreg RothJason TangJohnnyswimSeattle Live MusicShelby EarlSMI RadioSMI Radio XtraThe NeptuneThe Neptune Theater
← Previous Story Mac DeMarco Older, Wiser, and Wilder at the Moore Theater
Next Story → Leon Bridges at The Neptune