Planes on Paper and Friends

By Christine Mitchell on November 25, 2015@Housetornado37 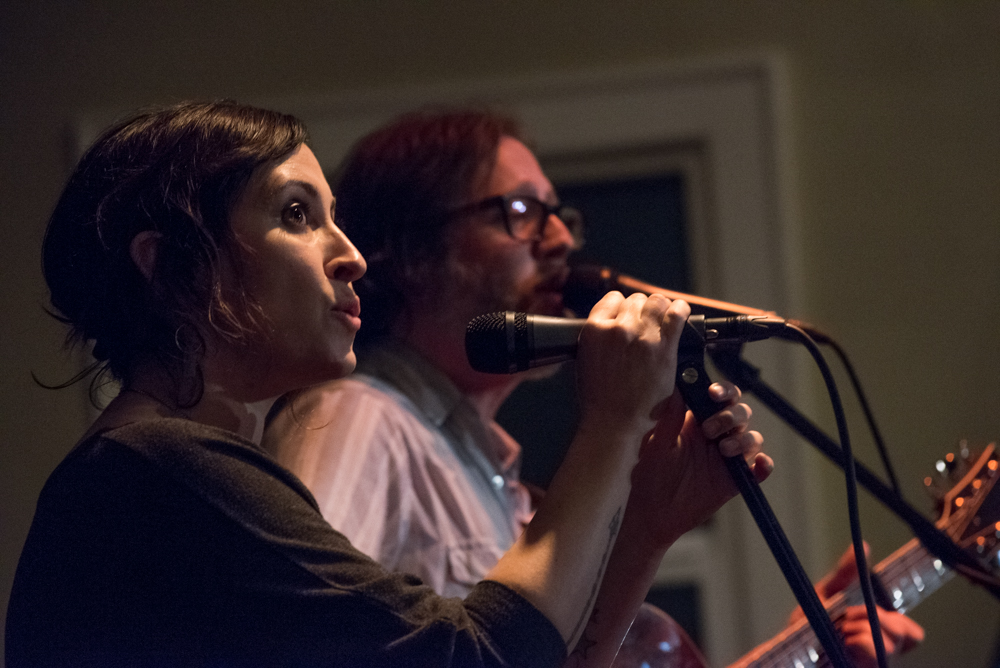 In the two years since Planes on Paper released their first ep, The East End Session, their live sound has morphed from the spare sound of two voices and a guitar to a full-on band. But never fear, the core of this venture remains intact (the backbone being the seamless harmonies of Navid Eliot and Jen Borst). The folk duo brought a cast of friendly supporting faces to the beautiful Ballard Homestead on Saturday, along with a new face in the form of opener Christopher Paul Stelling, who Planes met on their east coast tour this past summer.

Stelling performed like a man possessed. His wavy shock of hair and unruly beard contributed to his overall aura of consumed artist, and his between-song banter sealed the deal. He regaled the room with tales, such as a drunken post-gig party in Germany that started with furniture in a motel pool and ended the next day with an epiphany at Neuschwanstein Castle (followed by the song “Castle”). But it was the intricate music he played that won the crowd over, the densely layered lyric and relentless guitar arpeggios interspersed with emphatic, staccato stomping. His guitar (“Brownie”) looks as though it has many tales to tell of its own. Stelling stabilized his pinky at the end of a long, finger-shaped hole in the guitar body as his fingers danced across the strings. It truly feels that he has seen and absorbed much during his relentless touring around the world, and all of that complexity comes out funneled full-force in his performance.

Planes on Paper’s full band brings a dreamy, stargazing element that complements their usually stripped-down folk in a pleasant way. The manner in which Pat Tennis plays steel guitar is nuanced; while you’d think that the instrument would scream “country music,” Tennis brings out tones that makes one imagine they’re floating out on the Milky Way. Paired with Eliot’s musings on humanity (as in “Monolithia”), the music served the big ideas of the songs, zooming out from the idea of the self, while simultaneously demanding minute introspection. Talented musicians in their own right, multi-instrumentalist James Hunter and Sam Watts of Ghosts I’ve Met played bass and drums respectively, and with just the right feather-light touches when called for. Planes on Paper have made their cover of Ghosts I’ve Met’s “Metal Strings” a set staple, their version sounding delicate and sensual when filtered through Eliot and Borst’s delectable vocal pairing. Showcased in the nearly hundred-year-old meeting space of Ballard Homestead, this show was one not to be missed. Thankfully, Planes on Paper will be returning to Seattle next month in support of Smokey Brights at the Tractor Tavern.

Christine Mitchell has been poring over album liner notes pretty much since she acquired the skill of reading, and figured out the basic structure of rock songs at an early age. Whether it’s the needle popping into the first groove of the record, the beeps that signal the beginning (or end) of a cassette tape, or digital numbers ticking off the seconds from zero, music brings Christine happiness, ponderous thought, opportunities for almost scientific study, and sometimes a few tears. When she started attending live shows two decades ago, a whole new piece of the puzzle clicked in and she has been hooked ever since.
Related ItemsBallard HomesteadChristine MitchellChristopher Paul StellingFeaturePlanes on PaperSeattle Music Insider
← Previous Story INSIDE OUT: The Art of Being a Good Audience
Next Story → Public Image Limited Returns After 20 Years