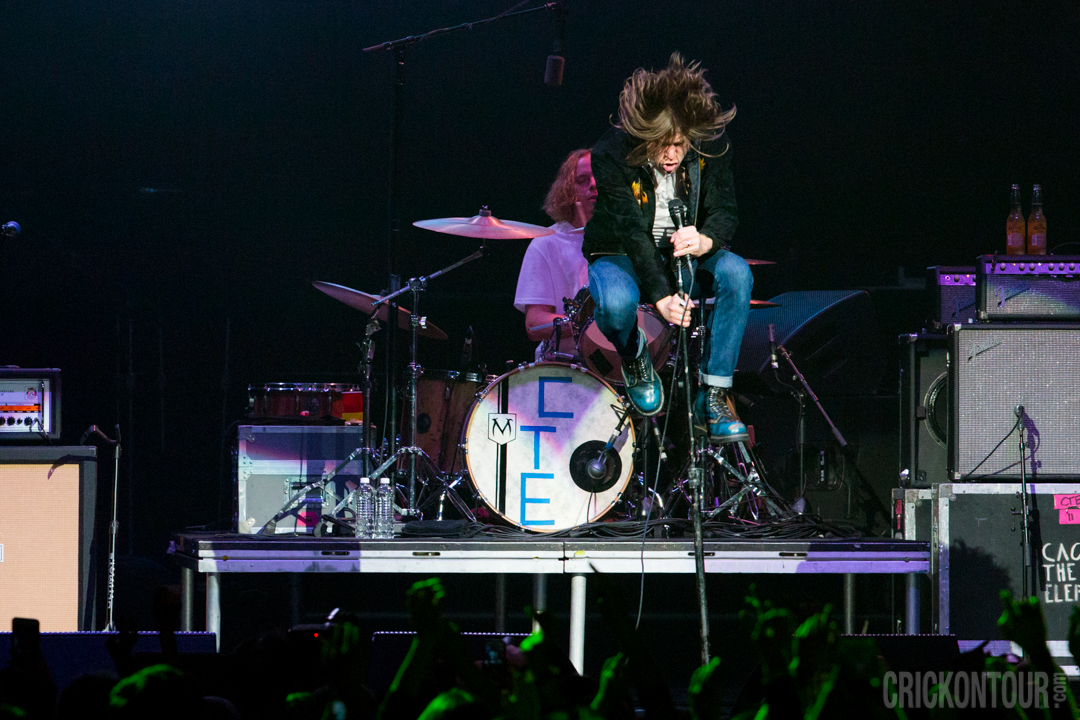 The holiday season in Seattle is time for eggnog lattes, rain boots, and most notably 107.7 The End’s Deck The Hall Ball, held at KeyArena. The End held true to this winter tradition of having an impressive lineup. From local bands to Grammy nominees, this show was full of music diversity.

Starting off the night was Seattle’s very own Deep Sea Diver. Their slow, melodic sound was a very nice way to unwind from the workday and get prepped for the epic night of music ahead. They rocked their radio hit “You Go Running” along with several other lesser known hits. Frontwoman Jessica Dobson blew everyone away by ending the performance with a simple yet emotional rendition of “O Holy Night,” leaving the crowd feeling high on holiday spirit.

X Ambassadors put on a gorgeous, soulful set. Lead singer Sam Harris picked up an acoustic guitar and did call and response with the audience on “Hey Hey Hey” and “Living Like a Renegade”. The crowd excitedly responded and it quickly turned into a “Renegades” singalong. Sam jumped on the drums and played them with the drummer, Adam Levin. Keyboardist Casey Harris, Sam’s brother, played with passion through the entire set. There was a guitar solo going into the last song that was absolutely ripping, with huge drum beats and a guitar/bass duel between Sam and lead guitarist, who kneeled on the ground before jumping around the stage. Finally, Sam picked up his sax and wailed away, lifting it above his head upon completion to the roars from the crowd.

Things got a bit bluesy with Nathaniel Rateliff & The Night Sweats. Hiding behind his giant beard, Rateliff gave a soulful, boot stomping performance. The band had a strong jazz influence with a trumpet and saxophone accompanying the piano and guitars. The gospel harmonic humming and snapping to the beat gave the feeling of being at a summer backyard gathering with friends and some sweet tea. With the background projecting beautiful scenes of mountain ranges and sunsets, it was easy to forget that it was pouring rain outside. The crowd stood and sang along to their final song, their big hit, “S.O.B.”

Staying in the genre of blues, up next was Alabama Shakes. Noted for their multiple Grammy nods, they proved they are as good live, if not better, than any recording. Starting out with “Future People,” Brittany Howard proved that you do not need to have stereotypical Hollywood looks to blow away a crowd. You need to have attitude and soul. Howard sings like she’s out to kill, belting passionate lyrics while rocking out on an electric guitar. Alabama Shakes have an old school sound reminiscent of 50’s Rock ‘n Roll with an Alabama twist. With six band members and three backup singers, this was a full performance. The band closed as just strong as they started with “Gimme All Your Love.”

Walk the Moon came on stage as “The Circle of Life” played, which seemed quite appropriate for this energetic group in colorful striped face paint. Singer Nicholas Petricca got the crowd jumping immediately with “Jenny.” Petricca rocked out on snare drums and keyboards, keeping the energy high throughout the performance. They covered all of their most popular hits including “Different Colors” and “Anna Sun.” It seemed like the entire arena was singing along.

Up next was arguably the best performance of the evening, Twenty One Pilots. This electropop duo is known for their live shows. The audience went wild the second they came on stage. The arena was dark. On center stage there was a glowing red light. “Heavydirtysoul” began to play. Frontman, Tyler Joseph, appeared singing into the red light, a microphone suspended from a beam above. His body language and voice was as dramatic and rose and fell with the music. The music dropped, and he did a dead fall onto the stage. These two guys packed their time with as many songs as possible including “Stressed Out” (performed half acoustically), “We Don’t Believe What’s on TV” (while wearing a floral button-up shirt and sunglasses to match the ukulele), and “Car Radio” (performed mostly from the stand)s. Between jumping off of a piano, running across the arena, and having the front row hold drums as Joseph beat the rhythm, Twenty One Pilots kept the crowd on their feet and cheering along the entire performance.

Back for their second consecutive DTHB was Cage the Elephant. Lead singer Matt Shultz didn’t skip a beat, almost immediately launching himself into the crowd. The alternative rock group kept the audience pumped up, starting their set with an unreleased song from their upcoming album Tell Me I’m Pretty. Shultz spent as much time as he could crowd surfing through the entire show. Security kept pulling him back but that did not defeat him. Throughout the performance (which included “Ain’t No Rest for the Wicked,” “Cigarette Daydreams,” and “Come a Little Closer”) Shultz continued to run around like a madman, headbanging and launching himself into people. During “Mess Around” he managed to work his way into the middle of the crowd on the main floor. He seemed to be ecstatically jumping along with his fans. They ended this amazing show with “Shake Me Down” as Shultz attempted to walk across and stand on top of the crowd.

The arena thinned after all of the high energy groups were done, but there was still one more band to go: Seattle’s own Death Cab For Cutie. Frontman Ben Gibbard was styling his classic mop top and guitar. They started off by playing “New Year” and “I Will Possess Your Heart.”  They covered all of their radio plays: “The Ghost of Beverly Drive,” “Crooked Teeth,” and “Black Sun.” The band was tight and Gibbard’s voice was harmonic. The evening ended with cell phones held high and Gibbard on piano singing “Transatlanticism.” It was an incredible finale to this eclectic evening full of soulful sounds and roaring cheers.

​Stumbling into writing purely by accident, this Seattle native has always had a deep love for music. Frequenting Seattle’s local venues and festivals since she was a teen (back when El Corazon was Graceland!). When she met a concert photographer who despises writing, they teamed up. And so it began. As a scientist by day, technical writing comes more naturally. The branch into creative writing has been somewhat of a challenge that’s been gladly accepted. Finally becoming a little part of something that she’s been a huge fan of for so long.
Related Items107.7 The End107.7 The End Deck The Hall BallAlabama ShakesAlex CrickCage The ElephantDeath Cab For CutieDeck The Hall BallDeep Sea DiverFeatureKeyArenaNathaniel Rateliff and the Night SweatsRenae KoepkeTwenty One PilotsWalk The MoonX Ambassadors
← Previous Story INSIDE OUT: Jammin’ Challenge winner brings judges to their feet!
Next Story → Muse’s Drone Invasion