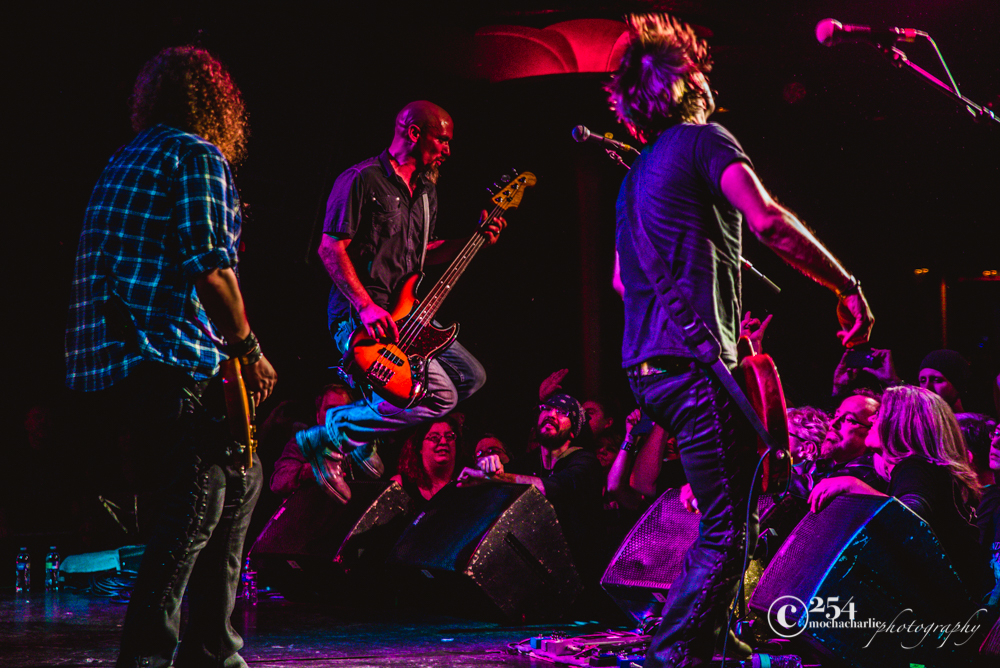 Making it big is always on the minds of bands these days, but year after year it gets harder to get it done. Many bands fail before they even begin, and others fail after they “try,” and can’t seem get their feet off the ground. That’s when many decide to throw in the towel. Not Seattle’s Windowpane. They set out years ago to play music they love, and to do it their way. They’ve gone through changes; yet lead singer, Glenn Cannon, never lost sight of what he wanted, and that is what has made the band what it is today. They admittedly chose to acknowledge that they would probably never make any money, but they didn’t want to stop doing what they loved: making and playing music for those who wanted to hear it. Their history, struggles, and success can be seen in their recently released Documentary, There’s No Such Thing As A The Record Label Fairy.

When Windowpane decided to throw their self-titled CD release party, they knew just how to do it. They booked a venue they knew would hold the capacity of friends, family and fans. They ask a few of their favorite local bands to join them on the bill. They ROCKED the socks off of everyone there, and they did it all as an independent band.

First to take the stage that night was local guitar, and rock badass, Amanda Hardy. On her website, she’s described as a “singer/songwriter,” but if you think she’s only that, you’d be mistaken.  She’s been on the local scene since being discovered via the internet at the age of thirteen, and since then she’s strengthened her talent, opened for national touring acts, and continues to dominate the stage each time she plays. As the only female on stage during this night’s line-up, she held her own.

Klover Jane not only dominated their set, they also premiered their latest video for their yet to be released single, “Walk Away.” They’ve spent years perfecting their rock and roll sound, which has awarded them the inclusion of the, “Top 5” in King 5’s Best of Western Washington poll multiple times, they’ve done numerous live interviews on local radio and most recently a live performance on King 5’s New Day Northwest. They describe their sound as “100% pure American rock,” and they are one of the bands that are proving that is is attainable to keep “rock” music alive. Their performance was filled with guitar riffs, deep bass tones, multiple mic stand flips, and an all-around rockin’ hard set.

Van Eps has some big plans for 2016, including celebrating their tenth anniversary – which they did on stage that night. They provide fans a performance that’s both gritty, and pure rock and roll.  Their vocal style, which combines lead singer Matt Strutynski and drummer Jake Jovanovich’s harmonies, blends well with all four band members. Although they only recently debuted their first full length self titled EP last summer, they’ve been working hard behind the scenes, making music and growing their fan base. As for 2016, they plan to release their newest single late this spring, and are looking at a possible summer release for their sophomore album. They also have their sights set on a multi-city tour after its release.

Windowpane was introduced to the stage by Steve Migs of KISW (local Seattle Rock station to which the band has received rave reviews lately, including shout outs, and on-air interviews). Playing songs off their self-titled release (which was produced by the band and through crowd-funding), fans cheered, and shouted, and  love and gratitude from the band  seemed to flow throughout their performance. Nearly brought to tears, Glenn Cannon held his hand to his heart, waved to the crowd, bowed his head, and mouthed “thank you” numerous times throughout the night. Guitarist Tony Abreu, and bassist Mark Harris, took their moments to play center stage filled with smiles, while drummer Sean Morrison, was exuberant from behind the kit and could be seen with a grin from ear to ear between and during their set. Fans screamed, shouted, and fed off the positive energy from the band. The event ended with an “after party” with Alive She Cried (a Doors tribute band) playing into the early morning hours. Windowpane spent the remainder of the evening among the crowd, hanging with friends (old and new), and signing merchandise for those that were willing to wait their turn. For those who hadn’t already received the new album via their Kickstarter campaign, they had plenty of copies on hand for purchase.  It will reach other mass market distribution soon (Jan. 28 on iTunes), but can be picked up via their website now.

Mocha Charlie is an amazing photographer who has a real passion for music. She covers and shoots several shows per month in and around the region. She a brilliant photo journalist but most importantly, she is also a mother who does her best to balance out her life and live it to the fullest. Mocha Charlie uses her passion and talent to support the community, her friends and family any way that she can.
Related Itemsalive she criedAmanda HardyFeatureKlover JaneMocha CharlieThe ShowboxVan Epswindowpane
← Previous Story Espresso & Cookies With Vanessa Carlton
Next Story → Chase Rice at The Paramount