By Christine Mitchell on February 11, 2016@Housetornado37 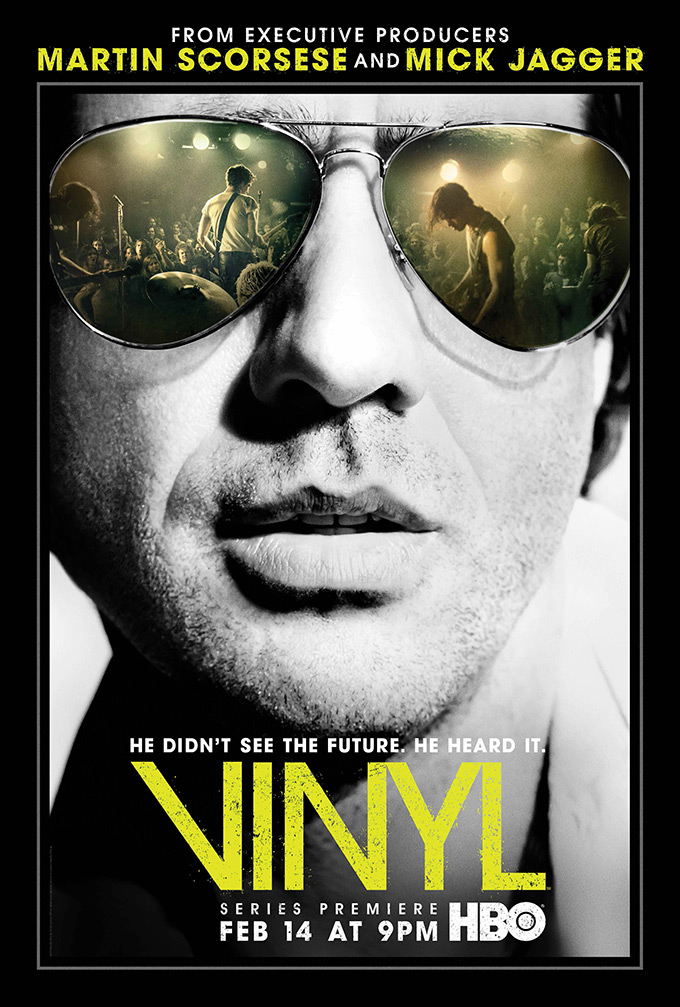 There is a scene in the premiere episode of HBO’s new series, Vinyl, where a building is physically ripped apart by music, and at first it feels rather heavy-handed. But upon reflection, the sequence plays out as an appropriate metaphor for that feeling of seeing a band or hearing music for the first time. It’s feeling as if you’ve been punched in the gut, knocked off your feet, or hit over the head with a sledgehammer, Bugs Bunny style. If you haven’t ever felt that way about music, then Vinyl probably isn’t the show for you. But, if when Bobby Cannavale’s character Richie Finestra becomes enraptured by a band, and you understand why tears are traveling down his cheeks, read on.

The pilot episode of Vinyl was written by four people that seem larger than life: Mick Jagger, Martin Scorsese, Terence Winter (The Sopranos, Boardwalk Empire), and Rich Cohen (Rolling Stone Magazine). The world which they build for 1970’s record exec Finestra is both lovingly conceived and unflinchingly executed. Finestra’s New York City is filthy and drug-obsessed. At the same time, it is burgeoning with the beginnings of punk, glam, and disco. Flashbacks to the ’60’s music scene are full of youthful enthusiasm and relentless racism. Cannavale (Boardwalk Empire) expertly inhabits both sides of this coin, as his character with the proverbial ‘golden ear’ goes from wanting to share the music he loves with the world, to wanting nothing more than to make the largest possible margin of profit and snort it up his nostrils. The one constant anchoring Finestra throughout the drama is the vibrant thread of music.

HBO has partnered with Atlantic and Warner Bros. Records for this series, which means that the show has a massive catalog of music from which to pull. The result is staggering in its wealth: Otis Redding, New York Dolls, Foghat, ABBA, Edgar Winter, Led Zeppelin, and Mott The Hoople are some of the artists heard in just the pilot. There is also new music created just for the series. Jagger and his son James (who acts as the frontman of the punk band Nasty Bits on the show) helped co-write a track, while country’s man of the moment Sturgill Simpson contributes the messy rocker, “Sugar Daddy,” which serves as the series’ theme (listen to “Sugar Daddy” below). And never fear, the series about the music business is in the business of getting this music out for you to buy: multiple soundtrack releases are planned, and, of course, some of them will be released on vinyl.

The story of the inspired innocent growing into the jaded monster has been told time and time again, but it appears in this instance that the coke-fueled Finestra has a chance at redemption, and it will be interesting to see how the season plays this angle. The supporting cast should ensure that whatever ensues will be entertaining (Andrew Dice Clay makes a raucous appearance as the drug-frenzied owner of a chain of radio stations, while Ray Romano takes a turn as Cannavale’s buddy and fellow record exec). Vinyl takes on a massive subject and era that is infinitely fascinating; and it appears at the outset that the show will be an engrossing delve into that glittering, conflicted time.

Christine Mitchell has been poring over album liner notes pretty much since she acquired the skill of reading, and figured out the basic structure of rock songs at an early age. Whether it’s the needle popping into the first groove of the record, the beeps that signal the beginning (or end) of a cassette tape, or digital numbers ticking off the seconds from zero, music brings Christine happiness, ponderous thought, opportunities for almost scientific study, and sometimes a few tears. When she started attending live shows two decades ago, a whole new piece of the puzzle clicked in and she has been hooked ever since.
Related ItemsBobby CannavaleChristine MitchellFeatureHBOMartin ScorseseMick JaggerRich CohenTerence WinterVinyl
← Previous Story SMI On The Road: The 2016 NAMM Show
Next Story → Why Are You Not on These Lists?!