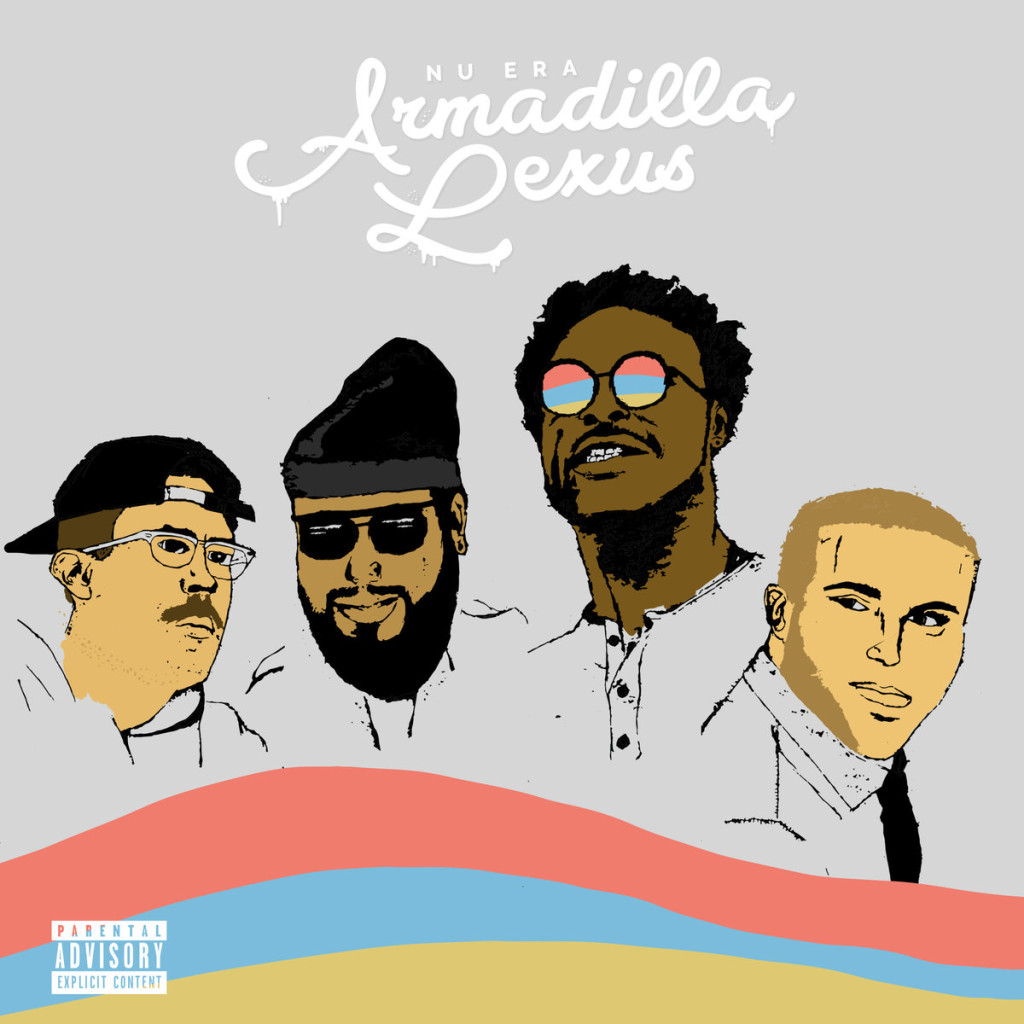 Seattle-based crew Nu Era descends upon 2016 with their latest full length, Armadilla Lexus, a slight departure sonically from their previous projects, which held more boom bap leanings. Is there any artistic maturation shown since their last LP? Let’s get into it . . .

Things kick off righteously with “Rose Garden,” a standout track in which Turtle T’s terrific lead-off verse peels off prose regarding artistic motivation: ‘we create for our creation/for our clarity and meditation, sorry – brain is on vacation.’ Blaine Rochester does his damn thing on the second verse and then – oh boy – Chima Abuachi comes in with a very commanding delivery that grabs attention like a pit bull locked on a mailman’s back fat. Chima’s mic-presence is equal parts mahogany griot and stone-faced obsidian gleam, possessing a style that gives off images of an animated Easter Island monolith with mean pen game. Very impressed with this guy – would love to hear him, Onry Osborne, and Xperience get on a track together (Captain Picard voice: “Make it so.”). Savoie expertly handles the production here with a beat that transitions, morphs and builds without being jarring or piecemeal. Definitely a great track.

The title track features a dark and menacing sound similar to Portishead’s “Wandering Stars.” Each member deftly handles mic duties but Rochester gets MVP with a verse that snaps, “I been skippin through your shit songs/actin like you got money with a flip phone/love me a girl that big boned/ and a ghetto whip with no roof on/ and it’s two toned/same color as that grey poupon..” Oh, it’s like that, Mr Rochester?

As the album plays, it’s evident how each emcee’s style is so different from the others, which keeps it interesting for the listener. Nu Era doesn’t suffer from Das Efx syndrome where one can’t tell which emcee is spitting due to similarities in voice and delivery. Each member’s style is very distinct and holds its own, yet plays well with others on a track.

Another great song is “More Alice,” with its panned vocal samples, turntable scratches and biographical bars. Turtle T talks about his flaws – on being out of shape, living in his sister’s house while being unable to attract a woman older than 22 – at 26 years old. In an art form that prides itself on impenetrable machismo, it’s a welcome reprieve to hear an emcee speak on what a non-creative might dismiss as Peter Pan Syndrome. Rochester also weighs in with a great verse about paying for his grandma’s medication while working dead-end jobs that he’s over qualified for. When he gets to the end of his verse, he’s telling a condescending supervisor to kiss his ass ‘with both cheeks’ – a sentiment most can definitely relate to.

Of course, it’s nice to hear Ra Scion’s brand of exuberant pugilism on “Rise Up,” a notable posse cut that’s sure to unhinge necks when rocked live. That synth bass line on the verse is a beast – it’s just so west coast. The arrangement on the chorus is reminiscent of !llmind’s work on “Frisbee,” and breaks up the song nicely.

Then we come to Blk Flwrs in which DoNormaal outshines the fellas here – sorry, not sorry! DoNormal has been horse whippin’ the scene lately and this appearance doesn’t disappoint, with a delivery that catches whiffs of Santigold with her repeated directions of ‘slow!’ only to settle into full on aggro-moxie with lines like “I don’t give a fu<k about that, I’m not feeling stuck up on that, ruby in my wrist chain like my boobies wasn’t insane.” No shade thrown to Turtle and Chima, who turn in good efforts, but DoNormaal just seems tailor made for this kind of beat and makes the concept her own.

It would’ve been nice to hear one or two more conceptual topics added to this particular set list. A listen through their back catalog shows this crew can handle more dense terrain as exemplified in songs like “Cops” and “Missed It” several years ago. All things considered however, Nu Era drops an enjoyable project with Armadilla Lexus, providing us with 11 tracks of studio slab filled with rock solid rhymes and top shelf beat craft. This project also solidifies Andrew Savoie’s place in the round table of regional beat smiths like Diogenes, Kjell Nelson and Stewart Villian that ‘heads should check for every time each one of them hits ‘submit’ on Bandcamp and Soundcloud.

You can download the full album here for free!

Carradin Michel is a Seattle native who spent his youth constantly stealing his older brother's Maxell cassettes, all dubbed with rap music from LA and New York. Those early tapes, along with a weekly soundtrack provided by Nasty Ness's Rap Attack radio show, caused him to fall hard for Hip Hop music and it's culture. He believes the Pacific Northwest has one of the freshest hiphop scenes in the world and wants to shine a brighter spotlight on it by documenting it's rich talent.
Related ItemsAndrew SavoieArmadilla LexusBlaine RochesterCarradin MichelChima AbuachiFeatureNew Music ReviewNu EraTurtle T
← Previous Story Capitol Hill Block Party Announces 2016 Lineup
Next Story → New Blood: SunSets West To Play Anchor Pub Saturday