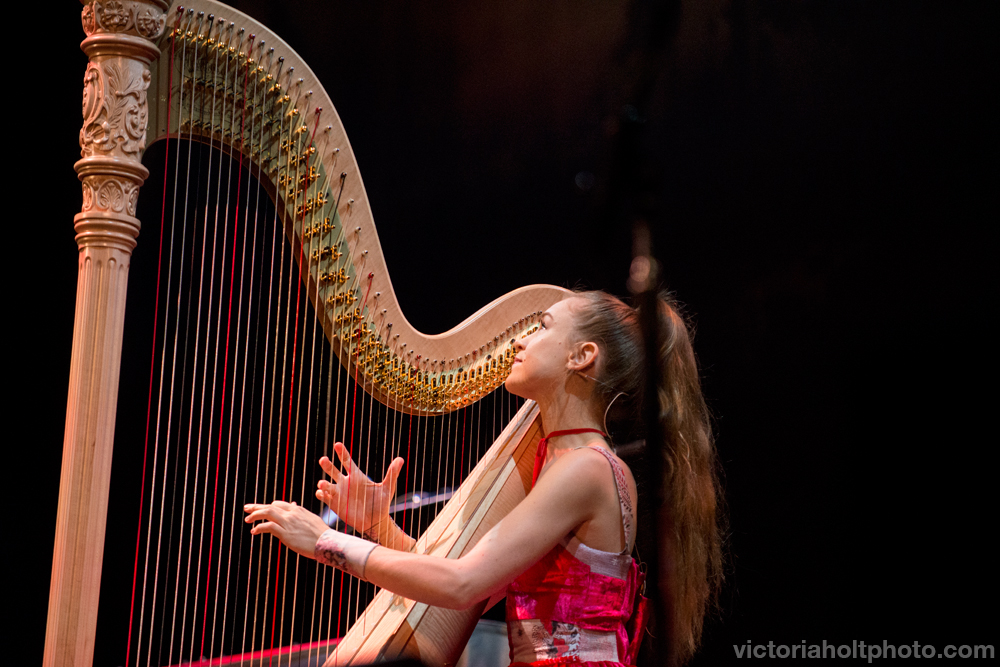 Joanna Newsom at The Paramount (Photo by Victoria Holt)

Once upon a time, there was a talented young harpist. She wrote epic tales and traveled the world many times over to bring joy to the crowds that gathered to hear her songs. Her name was Joanna Newsom, and on this particular night, her songs graced the halls of the historic Paramount Theater.

People of all ages came to see Joanna that night. There was an older couple sitting in front of me, and before the show began, a young girl – who looked to be about 7 – came rushing down the corridor. “I just told my teacher that I’m seeing a famous harpist!” She exclaimed to her grandparents.

Opening the evening was a local legend in his own right, Robin Pecknold, who sat alone in the middle of the grand picturesque stage and played his stripped down earnest folk songs. It was rather odd to see him playing by himself, since most people in the room were introduced to the name when he was playing with Fleet Foxes, but he was no less captivating by himself. You can’t find anyone else around here that has the same warmth in their voice like he does – the kind of warm that doesn’t settle in until later in the day, when the sun has passed its peak and the sky is starting to turn purple. It’s the kind of warm that’s finally starting to show itself in Seattle.

It was more than likely that a lot of people didn’t necessarily recognize Robin by his name, but once he started in on “Tiger Mountain Peasant Song,” one of my personal favorite Fleet Foxes songs, people started to realize where they knew him from. But before that point, his songs felt like a nice little secret that only a percentage of the room knew.

Robin finished his set, and after the usual intermission, Joanna Newsom took the stage. She was joined by a band of strings, keyboard, drums, and recorders. I bet the last time you thought you’d hear a recorder was middle school band, right? Wrong. Joanna’s siblings Pete and Emily Newsom were nice additions to the band, as every so often Joanna would just gaze at her brother or sister and smile. Perhaps the most impressive addition was multi-instrumentalist Ryan Francesconi, who may have actually been a wizard. He’d be playing electric guitar, and you’d look away for what seemed like 2 seconds, and then he’d be playing mandolin, or banjo, or suddenly had a bottleneck slide around his finger. That guy played it all. Joanna referred to Francesconi at one point as “the musician of the band.”

Joanna played songs from her whole catalogue that night, including a wonderful selection from Divers, her first release in five years. The songs felt like full folk operas by themselves, with intermissions and overtures aplenty. You could call Joanna Newsom “unique,” but that identifier works for far more than her magical Disney princess voice. She also crafts songs that on paper shouldn’t make any sense, but in practice they somehow do. The unusual syncopation and syllable emphasis take your ear on a journey that it’s not used to. But it could be because she writes songs on a harp instead of a regular old guitar or piano. Seriously, that harp is massive.

The performance was also a visual thing, where you were lulled into a trance by the songs and by watching her agile hands pluck away at this giant instrument that could more or less crush her.

Closing out the main set, Joanna brought out a couple oldies but goodies – “Cosmia” and “Peach, Plum, Pear,” but with a new darker twist on them. Robin Pecknold came back out to sing with the band on the last two songs, pre-encore, and it brought a whole new dimension to them. He stayed with the band for the encore, which Joanna prefaced with “It’s an encore, not the Queen of Sheba.” The night ended on a somber note, with lovely duets with Robin of “On A Good Day” and the heartbreaking “Baby Birch.” It was, however, a perfect way to complete a beautiful evening. Everyone left feeling warm and full because of Joanna’s mystical enchanted songs. In the words of Leslie Knope – oh Joanna Newsom, you poetic, noble land-mermaid.

Abby Williamson is a photographer, writer, and video blogger with a passion for live music – especially the local scene. She recently moved to Seattle after commuting from Gig Harbor for shows an average of once a week for five years, so she’s happy to not have to drive as much and photograph even more concerts! When she’s not elbowing her way up to the front row at a show or sorting through thousands of photos of those shows, Abby also does freelance wedding photography, all the while cultivating a decent-sized following on YouTube. Abby has contributed to several music blogs over the last five years (and she’s really excited to join the SMI team!), and has been published in at least one album booklet for the band, Someone Still Loves You Boris Yeltsin. She would like people to know that while music photography and writing is a huge passion in her life – she is a fan first, photographer second.
Related ItemsAbby Williamsonconcert reviewFeaturejoanna newsomParamount TheaterReviewrobin pecknoldryan francesconiVictoria Holt
← Previous Story Wolfmother Reigns Victorious in Seattle
Next Story → Ellie Goulding Rising