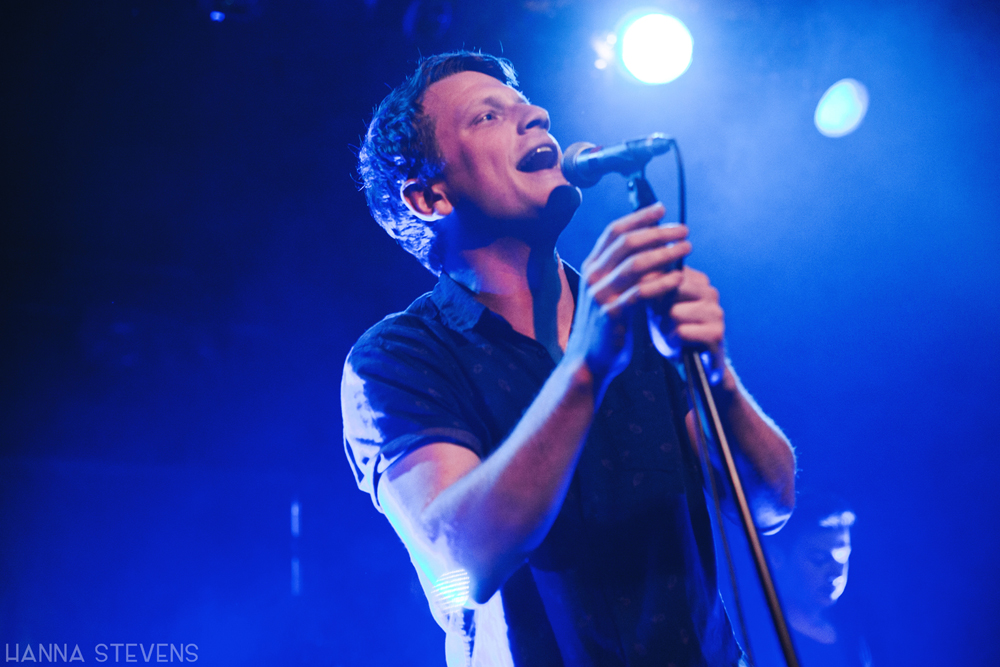 Hey Marseilles at the Showbox at the Market (Photo: Hanna Stevens)

When you have been covering local music for as long as I have, you see a lot of great bands come and go. You see a lot of bands have their shining moment and then fail to reproduce the magic. You fall in love with a lot of bands that end up breaking your heart by no fault of their own. But then there are bands like Hey Marseilles that stick with it, no matter how hard it can be to keep up with how fast this city is evolving, thus – how fast the music scene is evolving.

These boys have come quite a long way since 2008’s To Travels and Trunks. They’ve downsized and shuffled around a couple band members, but the core quintet – Matt Bishop, Nick Ward, Philip Kobernik, and Sam and Jacob Anderson – is what makes this band so special.

Hey Marseilles came home from a 3-month-long tour supporting their newest self-titled record and sold out the Showbox at the Market. Fellow locals Maiah Manser and Hibou opened the show, treating the room to a full night of hometown glory. Maiah wowed the all-ages crowd with her haunting electronic chamber pop. She’s currently working on her debut EP, but the insanely catchy “Hold Your Head Up” is already available to stream on Spotify (which we strongly suggest doing). The highlight of her set, however, was a twisty cover of Screamin’ Jay Hawkins’ “I Put A Spell On You,” that might have actually put a spell on all of us with wicked vocal layers and a bass line that you could feel vibrating the bottoms of your feet. Keep an eye on Maiah – for real. Girl’s got skills.

Hey Marseilles’ tour buddies Hibou played second, warming the room up with their sunny beach wave. It’s indie rock through rose-colored glasses – perfect for the impending summer (just so long as the weather decides to agree with us). Newly signed to Barsuk Records, Hibou is on a pretty great trajectory as well. Their debut self-titled record is catchy and easy to listen to – road trip music at its finest. And they’re pretty rad live too. Actually, if you want to see them play soon – they’ll be at Victory Studios for Band in Seattle on Friday, April 22nd. Fauna Shade is also playing that night, and there’s free beer. So what have you got to lose?

Now, you never would have guessed that Hey Marseilles has been on the road for three months, other than the fact that Matt Bishop announced it to the whole crowd. I’d never seen a band happier to be home, and because of that, the big fat grin did not leave my face but for a minute that whole night.

The band played songs from all over their catalogue. We got oldies like “Rio” off To Travels and Trunks, a smattering of tracks off Lines We Trace, a ton of songs off the new album, and Matt even played a song during the encore that the rest of the guys hadn’t even heard yet. As someone that has long called Hey Marseilles one of her favorite local bands, I firmly believe that this new album is their best. It mixes so much of what made the first two records great – Matt’s earnest singer-songwriter sensibilities, full folkestral arrangements, and the band’s undeniable chemistry. But there was a looseness I’ve never seen before. The pop rock sound that permeates the new album let everyone have so much fun on stage – especially the string section one-two punch that is the Anderson brothers. Sam even stepped into the crowd at one point with his cello propped up on his shoulder, and rocked out. With a cello. Seriously.

Nearing the end of the set, the big fat grin I’d been holding did finally subside.

“Last summer, we decided for the first time to put a cover on the record, and we’re really glad we did,” Matt prefaced their cover of David Bowie’s “Heroes,” before everyone started singing along.

Side note: I actually heard this version for the first time on KEXP the day after David Bowie died without even knowing it was a Hey Marseilles song, and when Matt told me that it was going to be on the record, I got chills. How crazy is that? They’d never put a cover on an album until now, and they happened to release that album within a month of Bowie’s death? If that isn’t fate, I don’t know what is.

After a rather long main set (15 songs to be exact), Matt came back out by himself for the beginning of the encore, with a song that can only be described as painfully relatable. It was simple and beautiful and made everyone remember how this band started ten years ago. In fact, the whole encore was a perfect way to sum up the ten years of this band.

“This last song is the first song we ever wrote together as a band, so thank you Seattle.” And “To Travels and Trunks” began, with just about everyone in the room shouting the lyrics at the tops of their lungs.

It’s good to have you back boys. We’ll meet you on the west coast any time, because this love sure isn’t over yet.

Abby Williamson is a photographer, writer, and video blogger with a passion for live music – especially the local scene. She recently moved to Seattle after commuting from Gig Harbor for shows an average of once a week for five years, so she’s happy to not have to drive as much and photograph even more concerts! When she’s not elbowing her way up to the front row at a show or sorting through thousands of photos of those shows, Abby also does freelance wedding photography, all the while cultivating a decent-sized following on YouTube. Abby has contributed to several music blogs over the last five years (and she’s really excited to join the SMI team!), and has been published in at least one album booklet for the band, Someone Still Loves You Boris Yeltsin. She would like people to know that while music photography and writing is a huge passion in her life – she is a fan first, photographer second.
Related ItemsAbby WilliamsonConcertFeatureHanna StevensHey MarseillesHiboujacob andersonMaiah Mansermatt bishopnick wardphilip kobernikReviewsam andersonShowboxShowbox at the Market
← Previous Story Dude York Takes 5 at Chop Suey
Next Story → Man Against The World: Gary Clark Jr. at the Moore