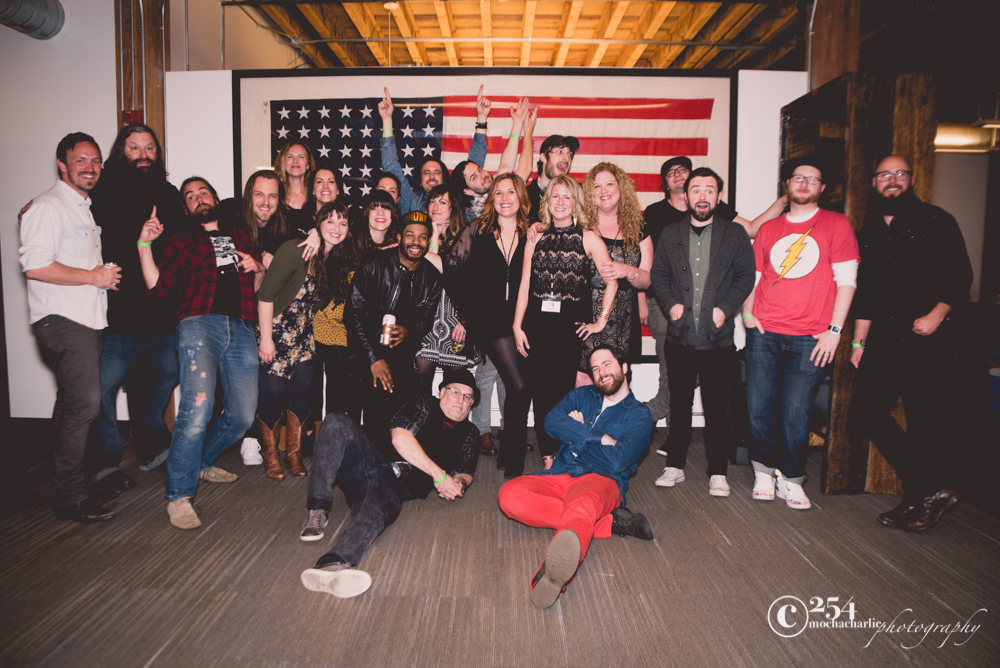 It is hard to believe that Kristen and Carrie Watt have been working tirelessly for the past eight years, bringing the denizens of Seattle some of the best music from the Northwest and beyond. Many national artists that stop through to play love a Seattle Living Room Show and Seattle Secret Show layover. Many local artists cut their teeth early in their musical journey before moving on down the road on national or even world tours.

I am blessed that I have had the unique opportunity to attend several of these amazing shows and co-host a few others. This year’s celebration was the best so far. There is one word that is synonymous with music and the types of shows that the Watt sisters put on, “Community.” Music is the ultimate team sport and community event, and several SLRS / SSS alumni came out to show their support and contribute their talent, adding to a wonderful recipe that the Watt sisters cooked up for what has become a wonderful annual spring tradition.

DJ Indica Jones got the party started mixing some classic 80’s mashups all night long in between some brilliant performances. The evening’s festivities kicked off with a flash mob dance, featuring NW Tap Connection, smack dab in the middle of the standing and seated audience, bringing the house down and setting the celebratory tone for the evening. The musical portion of the evening kicked off with “In The Round” performances by several past SLRS/SSS alumni. Mikey and Matty stepped up to to the microphones first and delivered a beautiful performance, followed by Tayler Lynn & Bradley Laina from Vaudeville Etiquette (who celebrate their record release at Neumos tomorrow night), Bryan John Appleby, The Banner Days, Chris Cunningham and Brantley Duke of Ravenna Woods, Shelby Earl and Matt Hart & Aubrey Zoli of The Local Strangers (who are both working on new records). Ayron Jones of Ayron Jones and the Way and Sarah Gerritsen closed out the Round with haunting and sultry numbers. You can see videos of those performances, as well as The Local Strangers’ performance below.

DJ Indica Jones continued to work his magic during the break followed by some authentic New Orleans style funk by the locally renowned D20 Brass Band. After a brief announcement, DJ Indica Jones did his thing once again to the delight of the audience who created an impromptu dance floor. Closing out the evening was hip-hop sensation Spekulation followed by the evening’s headliners, Fly Moon Royalty, who celebrated the release of their brand new record, Delicious Trouble, the previous night at Chop Suey. As always, this Northwest hip-hop/pop duo put on a wonderful show and capped off a great evening celebrating friendship, community, and music. Credit for the sonic quality of the evening’s performances has to got to long-time SLRS/SSS sound man, Ben DeVore.

Hilliards Beer and Proletariat Wine provided the adult beverages and GUGO app complimented those beverages with all kinds of food to fuel the performers and audience. The most special thank you from us has to go to our wonderful partners, Carrie and Kristen Watt. Like us, they love great music especially when it is delivered from some world-class local artists, who we all call our friends.

Mocha Charlie captured some magic moments in the photo deck below…