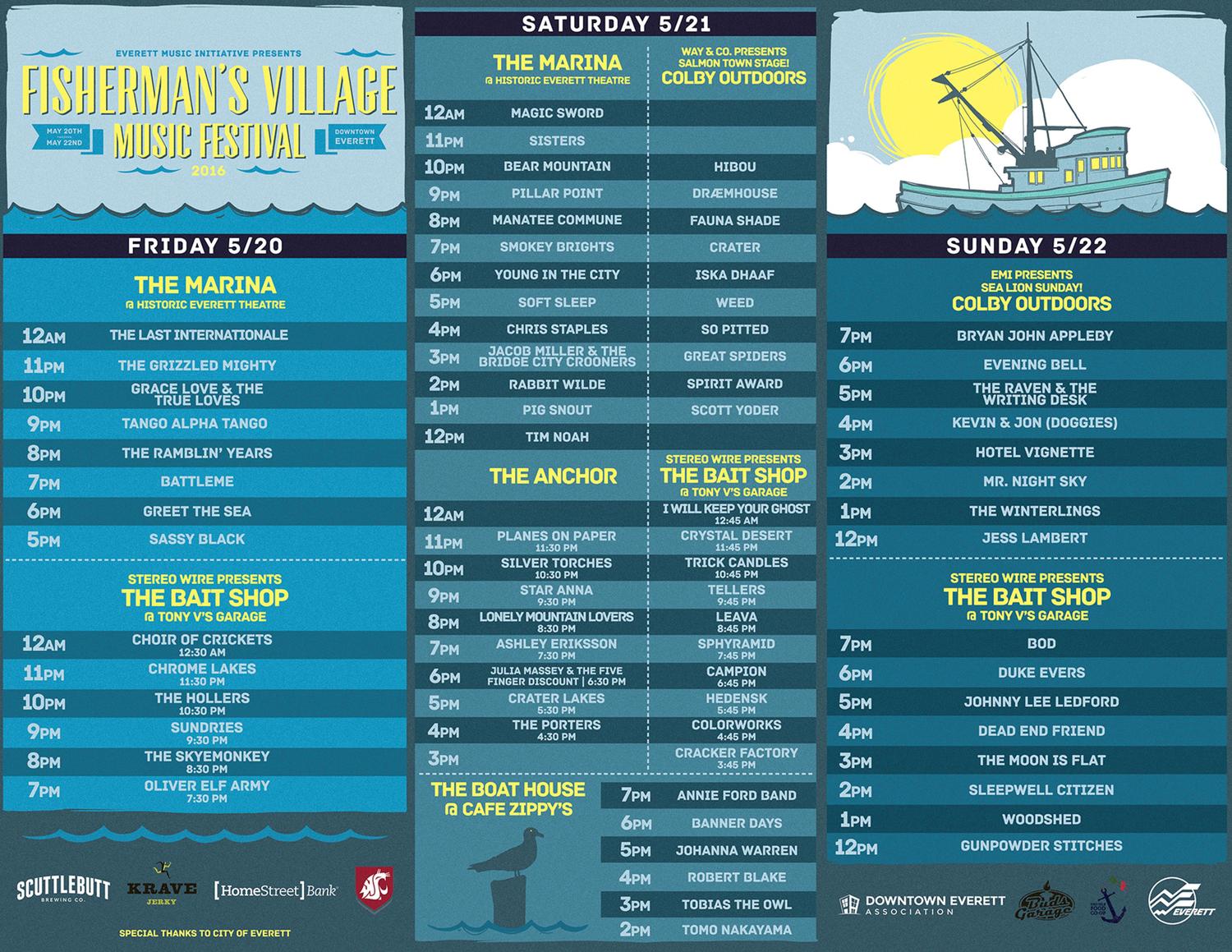 Fisherman’s Village Music Festival begins this Friday, so it’s time to (re)acquaint yourself with a few of the artists performing over the weekend. We undertook a little rapid-fire question and answer session with each band, and also had them select a song to share with all of you. The three questions we asked were:

1. What is the origin of your band’s name?

3. What is your favorite drink?

Some of these bands live in Everett, and some are just visiting, but all of their answers are entertaining. Read on and get familiar with the people who will be rocking us Friday, Saturday, and Sunday. Pick up ‘pay what you can’ tickets, head on over and join the party.

Band Name: After referring to our band as ‘bagel band’ for a few months since we all met working at a bagel shop, Travis threw the name Sundries out there and it just kind of stuck. And since our music is kind of a random assortment of styles and sounds it ended up fitting nicely.
On Everett: Despite Everett’s strange reputation, we’ve played up there a couple of times and have always had a lot of fun. I love that since RC and the crew has gotten the Everett Music Initiative up and running the city has really embraced it and started coming out to shows and making Everett a pretty rad and welcoming spot for Seattle bands.
Drink? Collectively, we can make it through a bottle of whiskey a lot quicker than we should be able to.

Band Name: We were talking about how music (and art in general) is all abstraction or representation of real things. Writing a song is similar in our minds to drawing two-dimensional planes to represent three-dimensional objects. If done right, people see the cube.
On Everett: Since we live in a smaller city, we have a huge respect for what the guys at Everett Music Initiative are doing. They are doing their best to bring a small market music scene to its full potential, and watching that is really inspiring.
Also, if we had to pick, we like the old jail better than the new jail, and really appreciate that they didn’t tear it down when they built the new one.
Drink? Jen: Pinot Grigio, any of them. Navid: Apple cider vinegar.

Band Name: Duke Evers is a character from the Rocky Balboa movies. We always loved his character and we really needed a band name.
On Everett: Everett harbors many great artists, and with the Everett Music Initiative those artists have a platform to launch from so we love that very much.
Drink?  Whiskey

and I was really into Animal Collective at the time.
On Everett: Love Everett’s Silver Cup Coffee, that place is super cute and cozy.
Drink? Horchata.

Band Name: Stupid and proud: SLEEPWELL CITIZEN. It’s a reflection of how culture glorifies ignorance.
On Everett: (We love) the people and the food
Drink? Quandary. It’s an Anchor Pub original drink.

Band Name: The name Fauna Shade originated in a Washington state history class at Everett high school where a list of vocabulary terms included ‘flora and fauna’ meaning plant and animal life of a specific region, in our case Washington. The word fauna was catalogued as a “nice word” but it needed some flare, I remember sitting on the toilet (the very toilet I’m sitting on now) looking up French translations of light oriented words like ‘dark’ and ‘shadow’, but some how it ended up with just a good ol’ English ‘Shade’.
On Everett: I love to walk its silent streets and wander in its forgotten corners; as a dysfunctional youth it offered adventure through alley ways and green ravines. Architecture of homes vary wildly, the evergreen cemetery has beautiful trees and mossy pathways, the back of the crematorium features an outlet for all your music making needs. Everett is my home.
Drink? I quench my thirst with Martinelli’s sparkling cider, drink it straight out da bottle.

Johnny Lee Ledford and The Rococo-A-Go-Go

Band Name: Johnny Lee Ledford was my father’s name. He killed himself when I was 12. Rococo-A-Go-Go is a play off Rococo which is “18th century musical style marked by light gay ornamentation.”
On Everett: I love how much of the old architecture still dominates the downtown corridor. Many beautiful brick buildings from the 1930s and 40’s make up downtown.
Drink? Favorite drink is Deep Eddy’s Ruby Red small batch grapefruit vodka from Austin, Texas.

The Moon Is Flat

Christine Mitchell has been poring over album liner notes pretty much since she acquired the skill of reading, and figured out the basic structure of rock songs at an early age. Whether it’s the needle popping into the first groove of the record, the beeps that signal the beginning (or end) of a cassette tape, or digital numbers ticking off the seconds from zero, music brings Christine happiness, ponderous thought, opportunities for almost scientific study, and sometimes a few tears. When she started attending live shows two decades ago, a whole new piece of the puzzle clicked in and she has been hooked ever since.
Related ItemsChristine MitchellCrystal DesertDuke EversEverett Music InitiativeFauna ShadeFeatureFisherman's Village Music FestivalJohnny Lee LedfordManatee CommunePlanes on PaperSleepwell CitizenSundriesThe Grizzled MightyThe Moon Is Flat
← Previous Story Cafe Nordo – one the hottest tickets in town. (part 1)
Next Story → Burgstock 4: The Battle of The Burg