By Kriston McConnell on June 1, 2016@Kristonisms 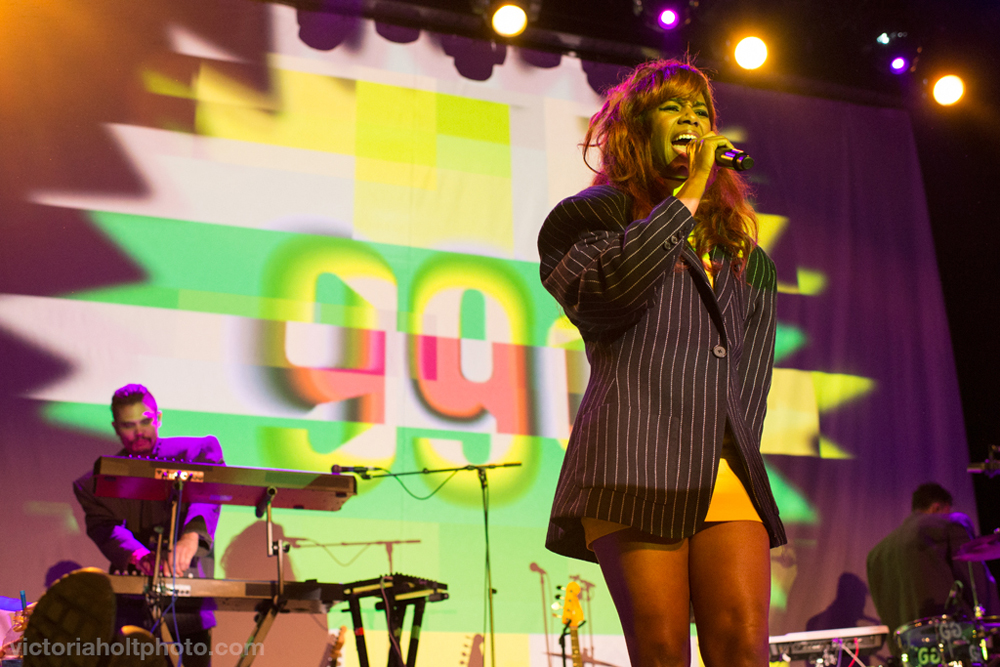 The Little Big Show concert series is a great way for music lovers to get to see some of their favorite artists while supporting local organizations at the same time. When the series was first launched in 2012, that’s exactly what KEXP, STG Presents and Starbucks sought to accomplish. Since its inception, the Little Big Show has raised around $200,000 for various organizations around the Puget Sound. The most recent concert was at the Neptune Theater this past Saturday, May 14, featuring DoNormaal, Kilo Kish and Santigold. Even though the original concert date had to be pushed back a month due to illness, the show was still a huge success. Thanks to all of the fans in attendance, Little Big Show #15 raised over $20,000 for EMP‘s Youth Programs.

First up for the night was Seattle’s very own DoNormaal. She is a favorite amongst many locals: her emotive lyrics appeals to a wide variety of fans. For being a younger artist, DoNormaal is confident on stage, and effortlessly raps all of her verses while seemingly not taking a single breath. Her style fit in perfectly with the other two artists on the lineup. After her performance, the next artist to hit the stage was the Brooklyn-based singer Kilo Kish. She released her debut full-length studio album this past February, and performed many of its songs throughout her set.

Before Santigold graced the audience with her presence, the host, DJ El Toro, went up on stage to introduce two people who have participated in EMP’s Youth Programs. One of them was local hip hop artist Travis Thompson. Thompson was a finalist in EMP’s Sound Off! battle of the bands and earned the opportunity to perform at some of the area’s top music festivals. El Toro also introduced a young woman named Brianna, who is a youth advisory board member. They both took the time to thank everyone for their support, and sang the praises of the Youth Programs.

If there are any fans of Santigold who have never seen her live performance before, then they need to make that a top priority. Her entire set was enthralling from start to finish. Her and her two dancers not only wear outrageous outfits, but they change them throughout the performance. The dancers alone are well worth the ticket price. They are entertaining, and do not detract from the content of the songs. If anything, they act as visual representations of each song. During the 90 minute set, Santigold performed a handful of trusted hits from her repertoire, including “Creator,” “Disparate Life,” and “Lights Out.” She performed many of her latest singles as well, which were a huge hit with the audience. About halfway through the set, Santigold called for audience members to go up on stage with her and dance. About two dozen fans scrambled up on stage and danced alongside Santigold as she performed one of the best songs of the night, “Creator.”

For her encore performance, Santigold sang two of her most popular singles – “Hold The Line” and “Big Mouth.” During the final song two bubble machines burst into life and showered the entire venue with light, airy bubbles. It was a spectacular end to what had been a spectacular evening. Santigold is a wonderful entertainer, and was a great selection for Little Big Show #15.

Kriston began her writing career as a passionate music fan. She attended dozens of shows, purchased CDs, vinyl and even cassette tapes of artists she barely even heard of. Shortly after joining a band's street team she happened to meet blogger Jacob Tender (now with Alternative Press) who asked her to write for his blog. After a couple of months he joined the staff of Under The Gun Review, and brought her along for the ride. After spending four years as a major contributor to the publication she moved on to be a web content contributor for New Noise Magazine, whose print magazines have a national reach.
Related ItemsDoNormaalEMPFeatureKEXPKilo KishKriston McConnellNeptuneSantigoldStarbucksSTG PresentsVictoria Holt
← Previous Story Sasquatch 2016 in Photos: Sunday
Next Story → Fisherman’s Village ’16: Winning