Home / Reviews / Flight of the Conchords likes to rock the party

Flight of the Conchords likes to rock the party 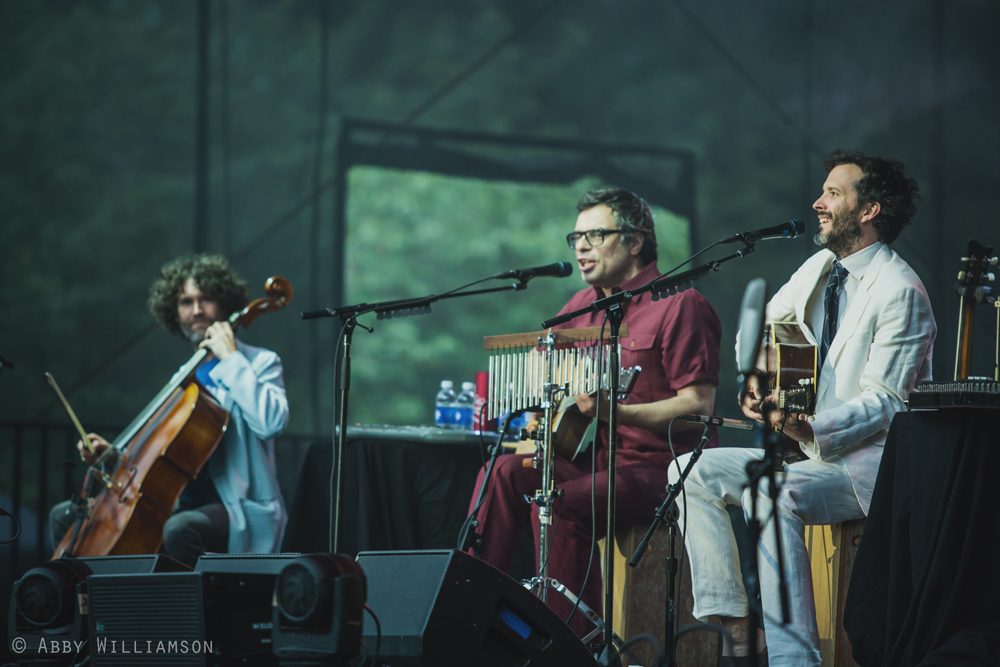 New Zealand’s fourth most popular guitar-based digi-bongo-acapella-rap-funk-comedy folk duo played to a sold-out crowd at Marymoor Park last week. In case you’re wondering who that is – it’s Flight of the Conchords.

The duo, comprised of Jemaine Clement and Bret McKenzie, pleased the crowd with a joyous set, with a surprising number of new songs. However, we did get our fair share of old favorites.

Eugene Mirman, also known as Eugene the Landlord in the Conchords’ HBO show, opened the show with his peculiar stand-up. But though peculiar, Mirman is so laugh-out-loud funny that he even makes himself laugh. It’s kind of awesome. The best bit of his act was when he read a loud an actual letter of cease-and-desist from a company that produces “digital drugs.” Yes, that exists. Mirman parodied the ridiculous things on his nine-volume comedy album called I’m Sorry (You’re Welcome). We’ll leave that up to your imagination, but please Google it.

After a short but satisfying set, Mirman introduced his friends Bret and Jemaine, and the crowd went wild. The weather was just perfect for an outdoor show, and the Conchords’ odd but easily digestible songs somehow quench your laugh muscles while being really damn catchy.

The new songs were fantastic, especially the epic western track “The Ballad of Stana,” where the punchline revolved around the protagonist meeting his doppelganger, and proceeding to make love to him. It was weird and wonderful all at the same time. Here’s hoping they put out a record with these songs on them soon, because I could play the jazzy “Shady Rachel” on repeat for days. “Someone once gave me a cucumber, and I played jazz on it. I can play jazz on anything!” Jemaine exclaimed, during one of the dozens of instrumental breaks for banter.

Early on into the set, the guys invited out the “New Zealand symphony orchestra,” which, as you can see from the photos, was literally just one guy with a cello. Oh those silly Conchords.

The last song, pre-encore, was a welcome and bittersweet tribute to the late great David Bowie. As soon as they started in on the “BOWIE’S IN SPAAAACE” riff, everyone in the audience sang along. “What you doing out there mahn?” It was a perfect place to put that song in the set, because the encore brought back all the silly.

But the actual finale of the night was the anthem for everything painfully self-aware, “Think About It.” At one point Jemaine butted in to the lyrics, “maybe not everyone gets a gun” and the whole crowd just lost it. There was cheering and laughter and sing-alongs, and everything that makes up a great evening. It was impossible to have left unhappy when Flight of the Conchords were your night’s entertainment.

Abby Williamson is a photographer, writer, and video blogger with a passion for live music – especially the local scene. She recently moved to Seattle after commuting from Gig Harbor for shows an average of once a week for five years, so she’s happy to not have to drive as much and photograph even more concerts! When she’s not elbowing her way up to the front row at a show or sorting through thousands of photos of those shows, Abby also does freelance wedding photography, all the while cultivating a decent-sized following on YouTube. Abby has contributed to several music blogs over the last five years (and she’s really excited to join the SMI team!), and has been published in at least one album booklet for the band, Someone Still Loves You Boris Yeltsin. She would like people to know that while music photography and writing is a huge passion in her life – she is a fan first, photographer second.
Related ItemsAbby Williamsonbret mckenzieConcerteugene mirmanFeatureflight of the conchordsjemaine clementMarymoor Parknew zealandReview
← Previous Story BRONCHO Fill Chop Suey With Reverb And Crunchy Guitars
Next Story → Blue Helix Video Premier Party at Columbia City Theater