KISS Brings Their Freedom to Rock Tour to Kennewick

By Mike Baltierra on July 12, 2016@baltierraphoto 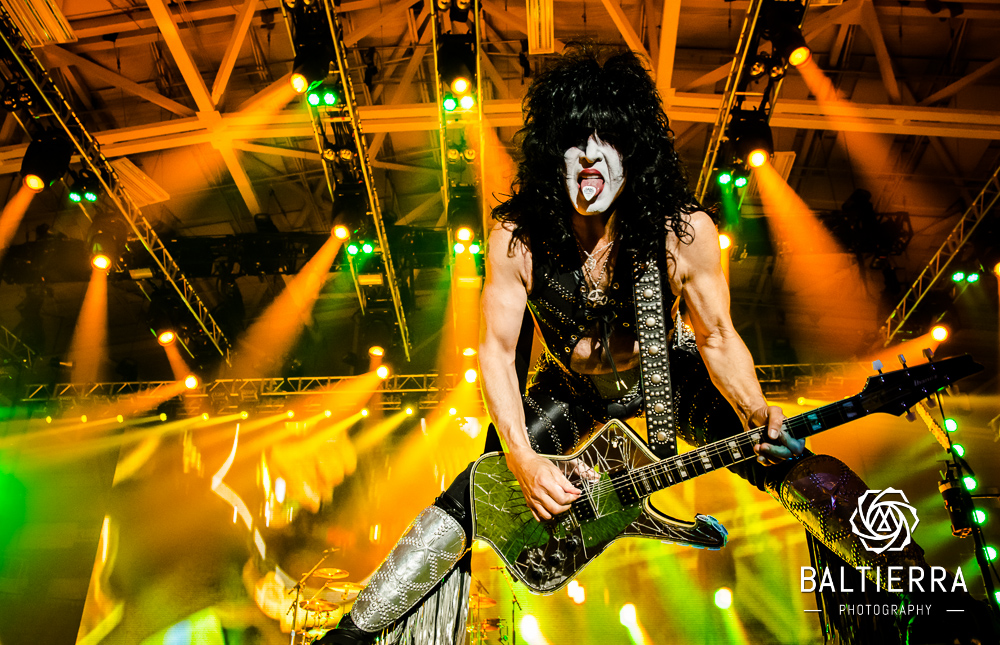 As the sold out crowd waited impatiently for the band to hit the stage, Led Zeppelin’s “Rock N Roll” pumped through the PA system, priming those at the Toyota Center in Kennewick for one of the greatest rock and roll shows to take place at the venue.

The house lights dimmed and fog machines filled the arena. An announcement comes over the PA: “You wanted the best, you got the best!” KISS hit the stage full throttle with “Detroit Rock City.”  Stanley had the crowd eating out of the palm of his hand. While Simmons lurked over the crowd, Thayer ripped out riff after riff, and Singer pounded on the drums. The band went right into “Deuce” with Simmons now on vocals. Fans who grew up listening to KISS, many of whom brought along their children who are also fans (some dressed up in the band’s signature makeup), were ecstatic and sang along as Stanley and Simmons belted out “Shout It Out Loud.”

Stanley thanked the crowd for coming out on a Sunday evening. He went on to explain that the band decided that they wanted to bring their music to cities that may not get large concerts or national acts, proclaiming “Playing to large cities is awesome, but all cities deserve the right to rock!” The band then jumped into “Creatures of the Night” and “Flaming Youth,” which led into Gene Simmons’ trademark of fire breathing at the conclusion of the song.

The band then played songs from early in their storied catalog, from classics such as “Strutter” and “Shock Me” to songs later in their catalog such as “Lick It Up” and “Psycho Circus.” Each song was complemented with amazing theatrics, such as Stanley flying over the crowd during “Love Gun,” to Simmons soaring into the lights during “I Love it Loud” and a large number of pyrotechnics.

Stanley also took time to let the crowd know that that on each of the United States stops on the tour, a local military reservist or National Guard member is to be selected as “roadie for a day”.  Stanley then introduced PFC Dakota Musick and KISS proceeded to donate $150,000 to the Hiring Our Heroes organization.  Stanley then introduced the mayor of Kennewick, Steve Young, who proclaimed that July 10 would now be known as KISS Day. With a US Marine Color Guard present on stage, the band played “The Star Spangled Banner” before ending the evening with “Rock and Roll All Night”.

The support act opening all of the shows on the tour is American Idol alum Caleb Johnson.