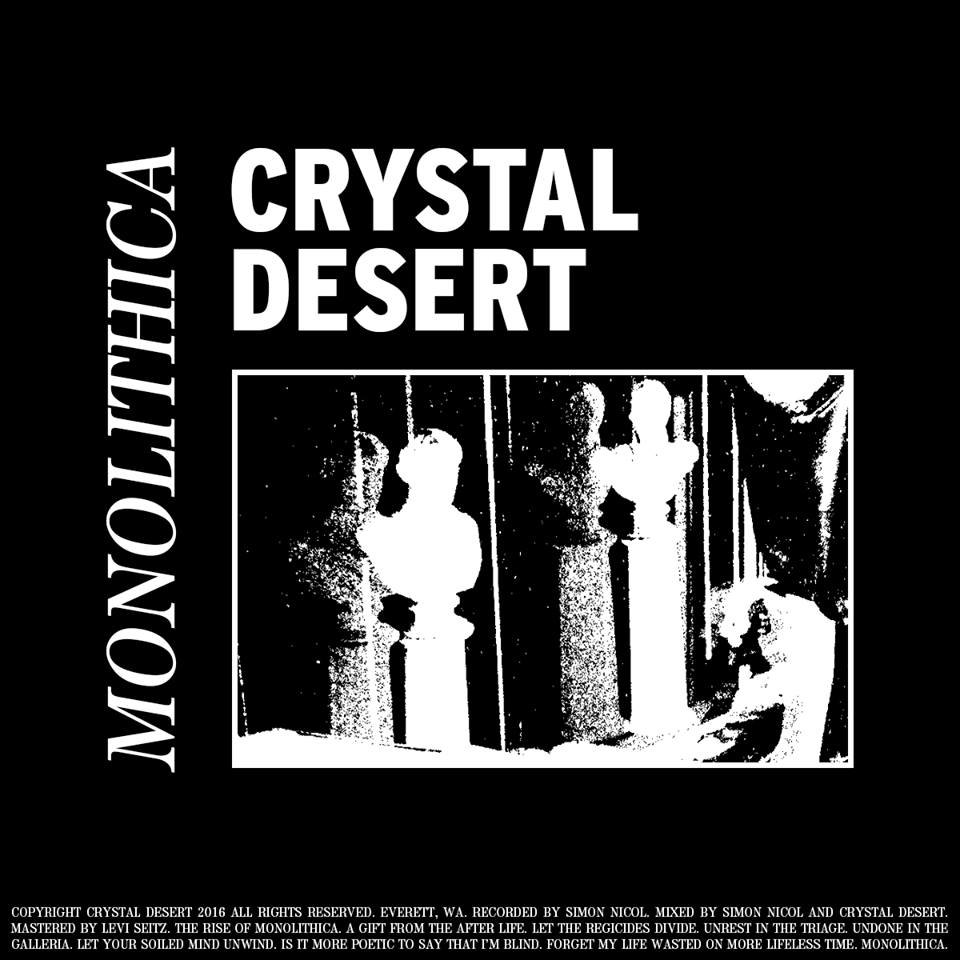 Crystal Desert is fixing to cast its web of tightly-wound, screaming with face jammed into a corner, sublimely dark punk rock over the entire earth. The band has announced their plans to release a string of singles during the summer months, and have aptly named the series Black Summer. For those left wanting more after consuming Crystal Desert’s two tracks off the Four Corners split LP, this is the perfect antidote.

The first single, “Monolithica,” has been released via Bandcamp and Soundcloud. The song begins with airy, minor-scale, backward sounding notes, which are quickly beat down by the relentlessly driving notes of Christian Smith’s bass and Ryan Alexander’s alternately snide, beseeching & philsophically fatalistic vocals, punctuated with screams and Joshua Ihler’s intuitive drumming. Ihler knows when to pull it all in with an animalistic, thudding beat, but he also knows exactly when to unleash that beast and bash the cymbals ferociously.

An extremely limited edition of twelve cassette tapes will be released for sale at their live dates starting on July 22. The new release gives listeners a double-helping of Chrystal Desert, with a couple of new tracks, the lovely”Monolithica” and the second track in the series, “Nightmare” (we think you’re gonna love this one, too).

In addition, this date is synonymous with the band’s KEXP Audioasis Presents show at the Central Saloon, where they will open for their Everett brothers-in-arms, Fauna Shade, and also features the bands Quiet and Sick Sister. Frankly, this is not one to miss. Crystal Desert’s live show is as physically punishing as their music is mentally, in the most fantastic way. Black Summer may be the best summer yet. Check out “Monolithia” below.

Christine Mitchell has been poring over album liner notes pretty much since she acquired the skill of reading, and figured out the basic structure of rock songs at an early age. Whether it’s the needle popping into the first groove of the record, the beeps that signal the beginning (or end) of a cassette tape, or digital numbers ticking off the seconds from zero, music brings Christine happiness, ponderous thought, opportunities for almost scientific study, and sometimes a few tears. When she started attending live shows two decades ago, a whole new piece of the puzzle clicked in and she has been hooked ever since.
Related ItemsBlack SummerChristine MitchellCrystal DesertFeatureQuietSick Sister
← Previous Story Lawrence Returns to Seattle Tonight
Next Story → CHBP Infographic