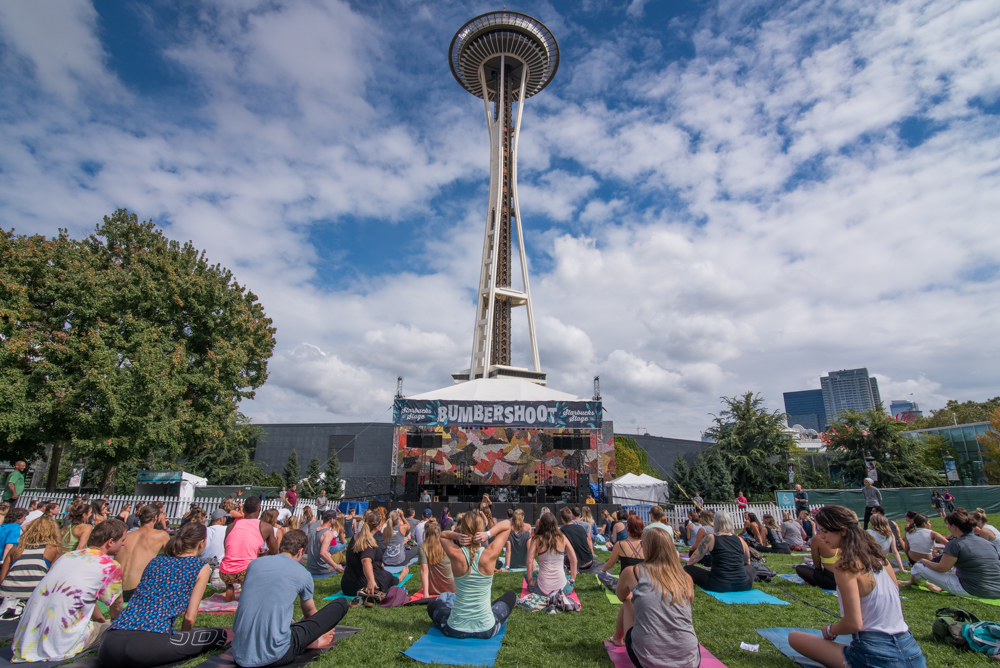 The second day of Bumbershoot was overwhelmingly exciting.  The tradition of Bumbershoot every year is something most Seattleites look forward to, but having a Macklemore & Ryan Lewis homecoming made this year’s second day that much grander.

Saturday was filled with bands and artists all exuberant and unique.  Each performance had its own flare, its own personality, and each Bumbershoot fanatic had the chance to make their day what they wanted it to be.

From the cool rockin’ sound of Hinds on the Starbucks Stage, to the soulful ballads of JoJo at Fisher Green and the ethereal beats of Super Square, the offerings were limitless. Whatever the desired flavor, each Bumber had the opportunity to make Saturday whatever they wanted it to be.

Regardless of how one spent the day, the climax of the weekend was arguably Macklemore & Ryan Lewis’ performance on the Main Stage.  The duo captivated the crowd with exhibits of some of their original songs, like “Can’t Hold Us,” “Same Love,” and “Wings.”

The show was really a party, a celebration of music and of Seattle—Macklemore even brought Dick’s Drive-In  hamburgers to throw out to the crowd during the song, “Let’s Eat”.

Bringing in tracks from their new record, This Unruly Mess I’ve Made, the pair had some additions to the stage—welcoming Wanz for “Thift Shop”, G-Eazy for the Macklemore’s new collaborative track, “Fuck Donald Trump” and even bringing out a few of the Seattle Seahawks during “Can’t Hold Us”.

Macklemore’s ad libs onstage invigorated the crowd between songs and rallied the community behind common efforts: equality for all, love, and most importantly a passion for helping out.  His performance was heartfelt, it was community: it was a Seattle Macklemore & Ryan Lewis show.  There was a mutual and holistic love onstage between the performers that the audience could feel—no matter how close or far away they were.

The show was powered by several accompanying musicians, including Budo on trumpet, guitar, and drums, Greg Kramer on the trombone, Owuor Arunga on trumpet, the Macklorettes and the Massive Monkees dance crew.  Most of these artists have been touring with the duo for most of 2016 and years past, so the homecoming was probably a much needed show for all of them to refuel.

Andrew Joslyn and The Passenger String Quartet made yet another fantastic appearance, playing along with the team, adding power and finesse with their strings to some of the more influential tracks, “White Privilege II” included.  They were with the group during the European leg of the tour this past spring and have been contributing their orchestral sounds for years.

Backstage after the show was a flurry with buzzing artists and dancers, friends and family, and even Charlie Sheen.  Not always a normal face to see in Seattle, but even he couldn’t resist the temptation of Bumbershoot and the celebration of Macklemore & Ryan Lewis in their hometown.

The duo’s families were also present, making the show that much more intimate and celebratory.  Macklemore & Ryan Lewis pulled out all the stops, busted out every move, and gave the audience a show they won’t be able to forget.  Everyone will be talking about this night for years to come, and waiting in anticipation for the next time Macklemore & Ryan Lewis come back home to Seattle.

Explosions In The Sky

Madison Warnock is a Seattle native writer/poet/aspiring novelist who graduated from Washington State University with a degree in English. She quickly made her way through freelance work molding her written tact through nonprofit journals, medical societies, and music blogging. She takes her musical inspiration from her close ties with the Seattle music community, and can often be found in recording studios and venues. She's a Technical Writer for GoDaddy, incorporating her love for community outreach and information acquisition. If Madison isn't writing or working she's either searching for the best gluten free/dairy free desserts in the city or playing board games. Notably she's the most cantankerous driver on the road, and she's never late for a show.
Related ItemsAnderson.PaakAndrew JoslynBumbershootChristine MitchellDesi ValentineFeatureG-EazyHindsJake HansonJoJoJoywaveMacklemoreMadison WarnockManatee CommunePony TimeRabbit WildeRun The Jewelsryan caraveoSuper SquareThe Front BottomsWanzXander DeccioYogashoot
← Previous Story Bumbershoot Day 1 Recap
Next Story → Bumbershoot Day 3