By Christine Mitchell on September 29, 2016@Housetornado37 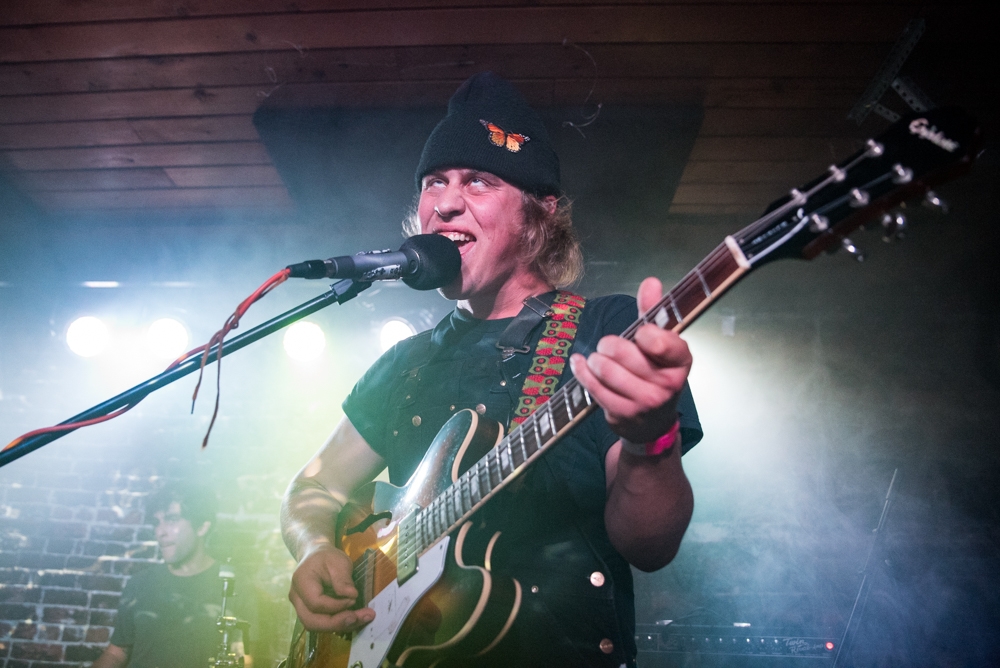 Fauna Shade at The Anchor Pub (Photo by Christine Mitchell)

Fauna Shade headlined a show last Saturday night that sold out The Anchor Pub in Everett for the first time since reopening two years ago. The packed venue played host to a slate of bands local to the area including Midnight Lights, Greet The Sea, and Crystal Desert, all handpicked by Henry Yarsinske, host of KSER’s The Stereo Wire. It was Yarsinske’s 30th birthday, and honestly, who wouldn’t want to throw a party where all of your favorite bands perform? What a genius idea…besides, it worked out in spades for everyone present. Get it? Present. In any case, the sold out event was another mathematical/emotional proof of and testament to Everett’s undeniably growing local scene.

The celebration started off with DJ Swade, who played a very eclectic mix that at one point included Madonna, and, at another, an instrumental on recorder. Attendees drank, chatted, and checked out the merch tables until Midnight Lights took the stage. The band’s pop-punk sound with a dash of screamo was airtight and clean as a whistle. Band members Kasey Peterson, Ziggy Ziegler, and Jacob Gilman were energetic as they bounced and bashed around the stage. The room’s attention was well held.

Everett’s Crystal Desert played their own flavor of punk, tossing out the pop part and substituting in a dose of angst and doom. This is the sort of music that Gordon Gano and co. might have made had they grown up in the shadow of the past 40 years of PNW rock history. Laser Beam’s Tyler Giese substituted for Joshua Ihler on drums and filled his part respectably, even taking a turn at the mic on “Generator 9,” a new song featuring vocals from each member of the band. Ryan Alexander and Christian Smith both seemed energized by the crowd, with Alexander aggressively attacking his microphone stand with his guitar on several occasions and Smith using his eyes to burn holes into the audience. The audience responded in kind with a mosh pit that broke out for a couple of songs. With all of their Black Summer tracks now released and hanging together in album form, the band plans to take a well deserved break.

Yarsinske used to play in a band with a couple of the guys from Greet The Sea, which just passed the one year mark as a band. Their sound is that of indie rock, and it was genuinely good, avoiding folky pitfalls while navigating the indie seas. It would be easy for Greet The Sea to sound derivative of a hundred other similar-sounding bands, but they surprisingly kept their individuality throughout the set, which was a very good thing. They also brought their buddy Henry to tears by covering a song he wrote long ago in a band called Orange Crate. The track was called “Time Machine,” and it was great.

Fauna Shade has had a killer year, from playing to a massive crowd in the middle of downtown Everett for the Fisherman’s Village Music Festival to performing a barnburner of a set at SASQUATCH! this past May. Their latest EP, Floral Hall, is the best music they’ve recorded to date. And they had another first on this Saturday night: their episode of Band In Seattle premiered on CW Channel 11 (watch it here). The boys could have stayed home and watched themselves tear it up on the telly. But no.

The set started off with a fog machine in overdrive. There was so much smoke, in fact, that folks in the crowd couldn’t see each other, much less any of the band. But everyone laughed it off; besides, Fauna Shade definitely SOUNDED great. Finally the band decided that they’d had enough “atmosphere,” and from then on, the packed Anchor and the band were snuggled up face to face. Derek Johnston was decidedly perky on the bass, delivering smiles and looks to frontman Scotty Smith that were a softer version of Smith’s own trademark crosseyed grimace. Drummer Ritchie Owens kept up with the other two and then some. The room was enthusiastic and just plain happy, which was reflected in Fauna Shade’s performance. The night ended with a electrifying version of “Bazzle Shabazz” off Floral Hall, complete with a friend of the band who was invited to sit center stage in a folding camp chair. Smith’s reverb-drenched vocal permeated the walls as he rocked his stocking cap right off of his own head. Killer ending, killer night.

Christine Mitchell has been poring over album liner notes pretty much since she acquired the skill of reading, and figured out the basic structure of rock songs at an early age. Whether it’s the needle popping into the first groove of the record, the beeps that signal the beginning (or end) of a cassette tape, or digital numbers ticking off the seconds from zero, music brings Christine happiness, ponderous thought, opportunities for almost scientific study, and sometimes a few tears. When she started attending live shows two decades ago, a whole new piece of the puzzle clicked in and she has been hooked ever since.
Related ItemsChristine MitchellCrystal DesertFauna ShadeFeatureGreet The SeaKSERMidnight LightsThe Anchor PubThe Stereo Wire
← Previous Story Actionesse gets bombastic at EP release show
Next Story → Art Of Dying Rocks Out With Nevermore