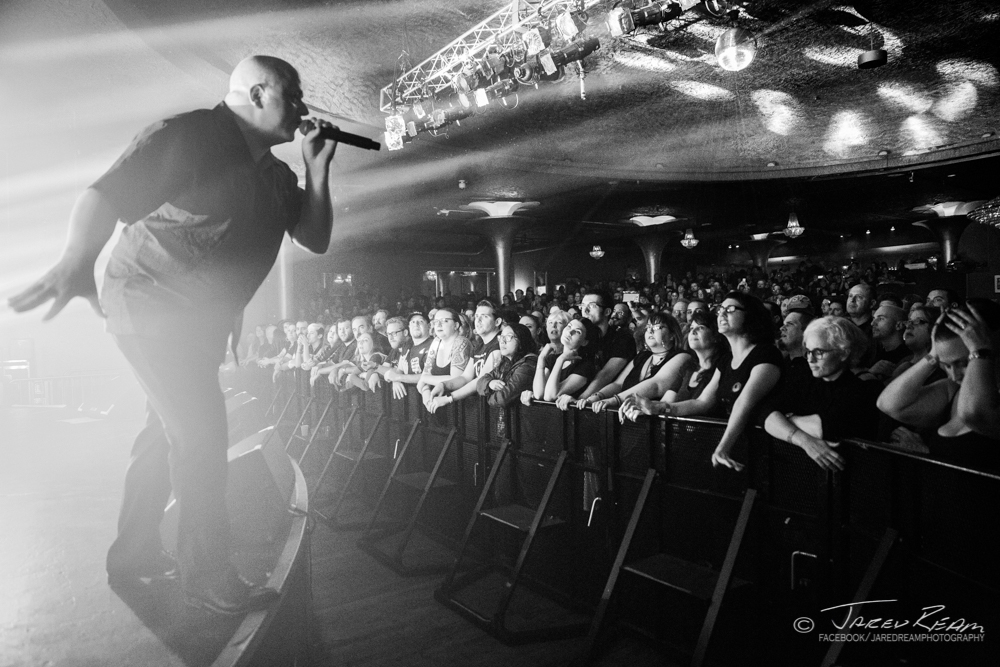 “It’s truly difficult to properly describe a show that is put on by a band with over 20 years experience, playing all over the world.” That is what was heard from one person in the crowd of fans standing outside the Showbox Market last Friday. The German based electronic music band, VNV Nation, kicked off their North American Compendium Tour in Seattle on October 7th, and it was kicked off properly. Singer Ronan Harris and drummer Mark Jackson are the power duo behind VNV Nation. They took the stage to a thunderous applause from a sold out Showbox. At first, Harris stood on the stage for a few minutes, taking in the thrill of the crowd, then the band kicked off into the song “Arclight.” This first song notably shocked Harris, and he later explained that it wasn’t even a song that they had been rehearsing and he wasn’t sure how it wound up being the first song of the show. He went on, talking about the planning of the tour, discussing how everything that could have gone wrong over the previous 3 months did go wrong. That evening their sound board stopped working. At the last second before the start of the show, the band had the soundboard replaced, and they were pumped and ready to perform. The entire evening’s performance did not focus on any specific albums; instead, it truly showcased their entire catalog.

The evening’s performance started late due to the band waiting for all of the attendees to make it inside the venue. Harris interacted well with the audience, even taking a fan’s mobile phone and shooting video of himself singing, the band members, and more video of the crowd clapping. VNV Nation’s electronic beats, beautiful orchestral ballads, and strong, deep lyrics were ingredients for an incredibly energetic live show. The crowd danced and jumped with the beats, shaking the floors of the Showbox to the point of it feeling like the crowd was on a giant trampoline. It was intense! VNV Nation played songs from their 10 studio albums and two live albums. The audience sang along to each and every song with passion and visible joy. Harris handled the crowd like an expert conductor, bring them to highs and holding their attention throughout the entire show. At one point, he made a comment about some folks in the audience smoking marijuana inside the club, something he was not pleased with. That comment didn’t disrupt the crowd, they danced and writhed to each note, all the way through a double encore.