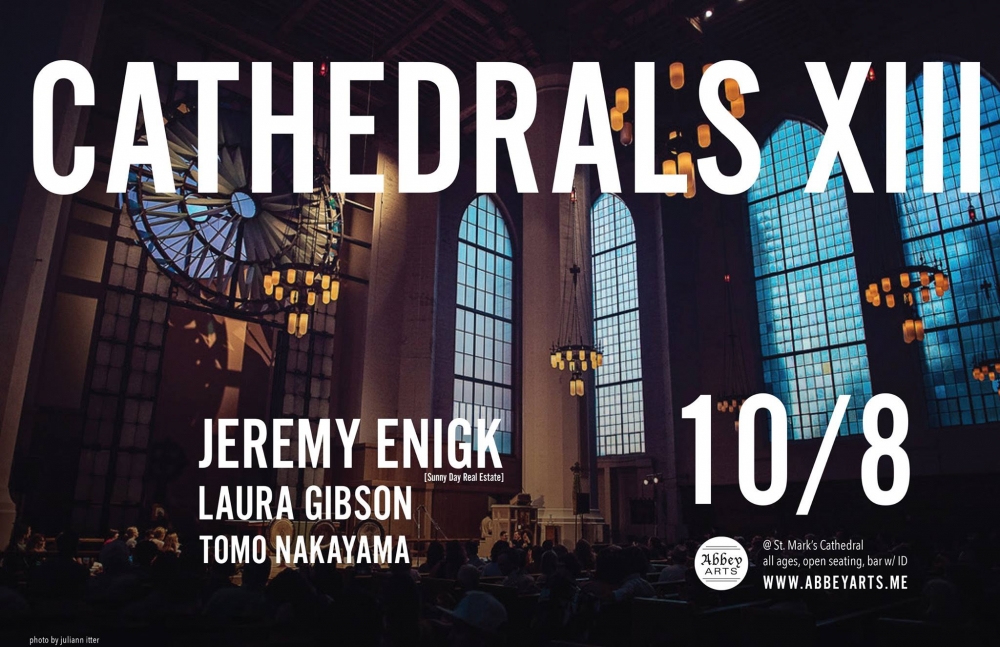 Lying down on the floor of Saint Mark’s Cathedral in Capital Hill on Saturday night was arguably the best way to experience one of the Fremont Abbey’s Cathedral Concerts trio, with Tomo Nakayama, Laura Gibson, and Jeremy Enigk.  Andrew Joslyn’s Passenger String Quartet also accompanied each artist during their set.  Joslyn arranged and composed the quartet’s accompaniments as well—leading to a total of 16 songs between the three artists, just for that evening.

The event was cast with dim candles outlining an intimate stage confronted by an eager audience.  The audience looked posed, like awe-stricken parishioners, entranced by the music. Every pew was filled, and additional chairs were added to the end of each isle, filling in the remaining space around the main room. 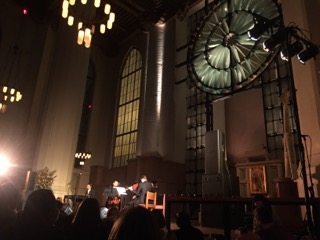 Nakayama opened the evening, coaxing the audience into a relaxed state.  His clarity of voice gave a warmth to the room and bounced off the strings, creating textures people could feel.  You didn’t even need to see the stage.  It was a rare show where it was more about experiencing the sounds.  It was more auditory than visual; which isn’t as common at live shows anymore, especially ones that have over 800 people in the audience.

Apart from performing his own songs including “Cold Clear Moon,” “Seward Park,” “Horses,” and “Magnolias”, with Joslyn’s quartet, he also threw in a Björk cover.  The combination of Nakayama’s smooth voice and the strings made for a full and almost ethereal sound.  There was no excessive ad-libbing or jesting with the crowd—it was purely about the music.

Gibson was up next, and she created a friendship instantly with the audience.  Perhaps her recent 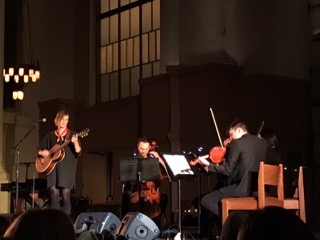 European tour contributed to her eloquent performance, because her easygoing and conversational interaction with the crowd made her set feel like an intimate living room show; an environment people will pay big money for—just the chance to be close with an artist.

One of her more interesting tunes, “Search for Dark Lake,” gave an eerie signal towards the impediments of looking for things you’re not supposed to find.  Along with “The Cause,” “Five and Thirty,” and “Last One,” the audience was treated to a set big enough to command the cathedral. Gibson’s unique voice, sturdy electric guitar, and Joslyn’s string section made each tune important.  Every song had an impact, and gave a taste of her most recent record, Empire Builder.

Once Enigk got on stage, the crowd was thoroughly prepped and collectively warmed up.  There was now a different type of energy that filled the room. People’s eyes widened and their bodies perked up: they knew something special was about to happen.  Enigk blessed the audience with a performance of his acclaimed album, Return of the Frog Queen, originally released in 1996. 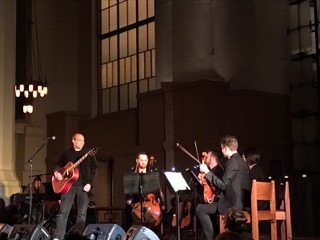 The Baroque pop tunes were given new life in the walls of the Cathedral, an experience that was only made possible by the grandeur of the venue itself.  It felt like a new age ode to the good rock of the 90’s.  The album was written after Enigk converted to Christianity, and the original full orchestral sounds of the tracks were parled through the quartet’s accompaniment. The history behind the significance of the album was all too relevant to the venue.  For his encore, Enigk came back out and soloed on the keyboard, surprising the audience with a lullaby U2 cover, “MLK,” from their 1984 Unforgettable Fire record.

The lush Cathedrals series is still going on, with three epic shows still to come.  Of course they’ll all be at Saint Mark’s Cathedral—so if the artists don’t entice you enough, the venue should in and of itself.

Madison Warnock is a Seattle native writer/poet/aspiring novelist who graduated from Washington State University with a degree in English. She quickly made her way through freelance work molding her written tact through nonprofit journals, medical societies, and music blogging. She takes her musical inspiration from her close ties with the Seattle music community, and can often be found in recording studios and venues. She's a Technical Writer for GoDaddy, incorporating her love for community outreach and information acquisition. If Madison isn't writing or working she's either searching for the best gluten free/dairy free desserts in the city or playing board games. Notably she's the most cantankerous driver on the road, and she's never late for a show.
Related ItemsAndrew JoslynAndrew Joslyn's Passenger String QuartetCathedral ConcertsFeatureFremont AbbeyJeremy EnigkLaura GibsonMadison WarnockTomo Nakayama
← Previous Story “R” Day Parties into the night
Next Story → Christine And The Queens