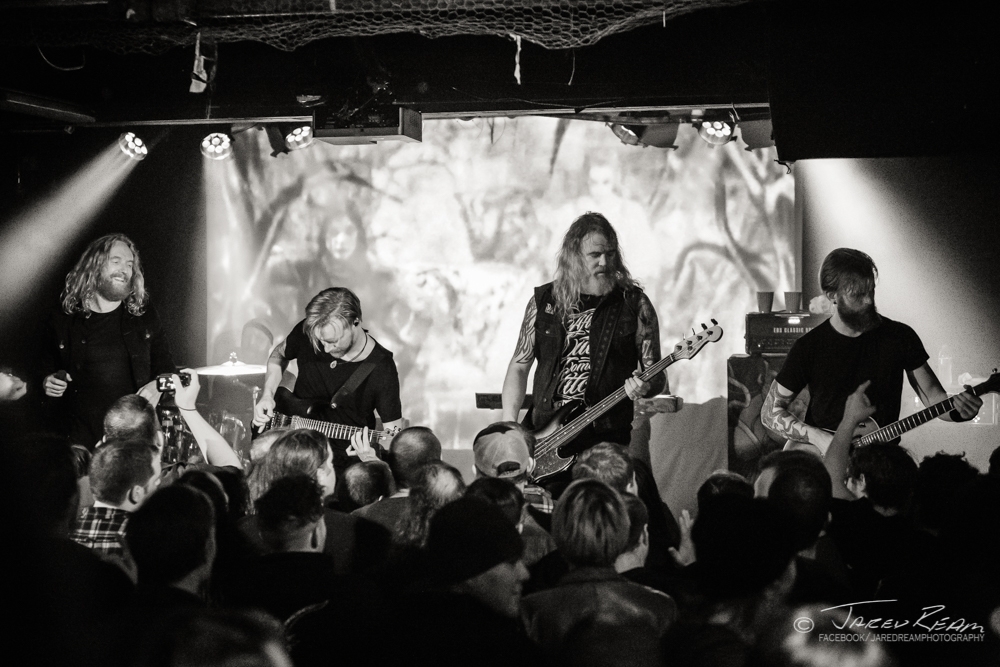 Melodic death pioneers Dark Tranquility devoured the crowd at El Corazon with the melodic trance of their music. The band is currently on tour to support their latest album release, Atoma. They were joined by Swallow The Sun, Enforcer, and Starkill for the United States leg of the tour. Each band displayed their own unique perspective of metal music to the packed house. They were supported by local bands Deathmocracy, The Devils of Loudun, and Wintertide.

Wintertide got the show off to an early start.  The band’s one member, Kohld, rocked the house with a short, melodic set that set the tone for the night. The Devils of Loudun came on stage with a vengeance, shredding their way through their set as well. This six piece symphonic and melodic death metal band lit a fire under the crowd. Lead singer, Vance Bratcher, growled and cookie monstered his way through their set, leaving Deathmocracy a hard show to follow. Despite having technical difficulties during the middle of their first song, the band was able to pull off an amazing set, fueling the flames for the touring bands.

The crowd was growing larger: it was time for Starkill from Chicago to hit the stage. In celebration of their latest album Shadow Sleep being released, the band pounded the stage with great energy. Bassist Shaun Andruchuk canvassed the stage with such fervor that he seemed at some points to be the rowdiest one in the bunch. Not to be outdone, rhythm guitarist Tony Keathley matched and at times surpassed him. Starkill caught the attention of the older members of the crowd by playing  “1984” by Van Halen. This band puts on a hell of a show with a ton of engaging stage presence.

Next up was Enforcer. Hailing from Stockholm, Sweden, this band is a gallon of gasoline on fire on stage. Their sound is that of high energy waves of speed metal riffs and piercing heroic vocals. Enforcer grabbed the crowd and shook them to their very core. Heads were banging with intensity and feeling as the band tore through their set featuring songs from the bands latest album,  From Beyond. This is truly one of those bands that should not be missed.

Just when the night couldn’t get any better, darkness filled the stage, and Swallow The Sun came on to roaring applause. This band has deep riffs, crushing rhythms, and what can only be called mesmerizing lyrics and melodies. The crowd loved every song they played. The enthusiasm that was coming from the crowd was almost palpable, and was completely returned from the stage. You could tell every member of the band loved the the reception they were getting from the El Corazon crowd.

The climax of the show was when Dark Tranquility took the stage. This band is one of the longest standing of the original Gothenburg metal scene, a style of music that has changed the world of metal. The crowd was completely elated and energetic from the opening riff, which was noted over and over again by lead singer Michael Stanne. During almost every song he would reach out to the crowd and high five or grab the hands of the audience members.  At times he conversed with them between songs. They played a set comprising of songs from their latest album Atoma to their earliest albums. Their main set included such masterpieces as “The Treason Wall,” “Monochromatic Stains,” and “The Science of Noise.” After a brief break, Dark Tranquility retook the stage for an encore which topped off the night. If the crowd had any doubt in their mind about whether metal is alive and well, it was erased. Metal will always have a timeless appeal to the masses.