The Pretty Reckless Meld Blues and Rock At Showbox SoDo 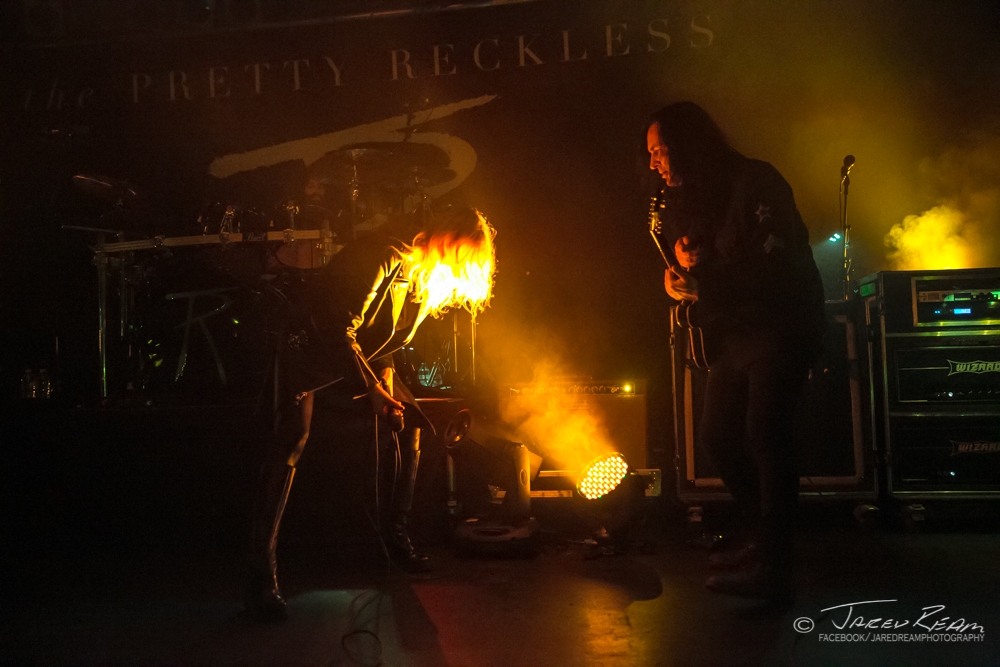 Hot on the heels of the release of their third album, Who You Selling For, The Pretty Reckless blew into Seattle for an absolutely incredible show at Showbox SoDo in Seattle.

Opening the night at the Showbox were Orange County rockers Them Evils. This is a group that will not leave you disappointed. With a sound that is a mix of Black Crowes, White Stripes, and dash of Clutch, they have a very in your face style of music and rock. The three-piece band left nothing on stage as they tore through their set. They finished the with their own rendition of Motorhead’s “Ace of Spades.” It was truly one of those covers that Lemmy would’ve been proud to hear.

Next on the bill was the Midwestern Holy White Hounds, with a sound that is strictly all their own. Their music and sound could be described as a mixture of stoner rock with a little punk.   The first 3 songs were infectious and groovy, which led the audience to want more, but then the lead singer Brenton Dean started talking about a lot of things, eventually losing the crowds interest. One of the only saving graces for this band was definitely the lead guitarist, James Manson. Manson engaged with the crowd by surfing on them, all while tethered to his amp and pedal board. This is a young band to the national tour circuit, who needs to learn a few things from the old timers on how life is on the road.

The final act of the night was The Pretty Reckless, a gritty, bluesy rock band who is turning rock and roll on its head. Taylor Momsen, in all of her beauty, was dressed in a long leather jacket, t-shirt and her trademark black leather boots. She took the stage with a vengeance and didn’t let up until the set was over. The Pretty Reckless were on stage for just over an hour, and during that time Taylor hit note after note without fail or missing a beat. She was supported by Ben Phillips on the lead guitar, bassist Mark Damon, and drummer Jamie Perkins.  Opening their set with “Follow Me Down” off their 2014 album Going to Hell, Momsen rocked the room with her gritty, sexy sultry vocals and mesmerizing body moves. Their fourteen song set was laced with a little bit of everything from all three of their studio albums, with tracks that included “Going to Hell” and “My Medicine,” though it was the chart toppers “Living in the Storm” and “Take Me Down” that drove the crowd to a fevered pitch. The Pretty Reckless knows how to rock and melt the faces of the Seattle crowds as they finish up the US leg of the tour, before heading to the UK in January.

Setlist:
Follow Me Down
Since You’re Gone
Oh My God
Hangman
Make Me Wanna Die
My Medicine
Prisoner
Sweet Things
Light Me Up
Who You Selling For
Living In The Storm
Heaven Knows
Going To Hell
Take Me Down

Encore:
Made Love
Fucked Up World