By Mike Baltierra on December 28, 2016@baltierraphoto 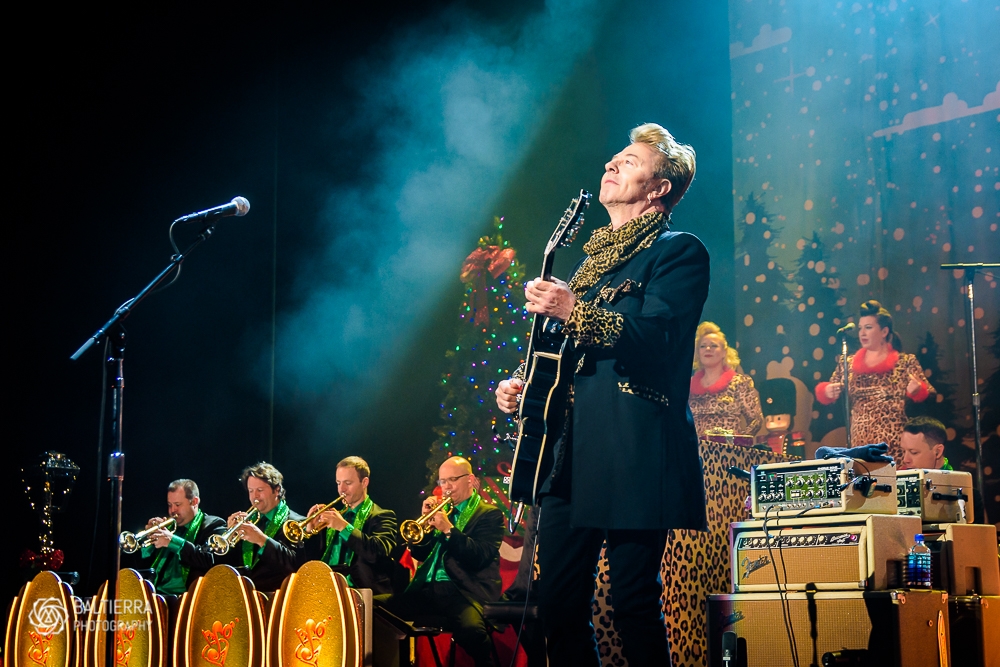 Brian Setzer, leader and founding member of  Stray Cats, along with his big band jazz ensemble, The Brian Setzer Orchestra, brought their 13th Annual Christmas Rocks! Tour to the historic Paramount Theater in Seattle on December 26th for a great evening of Holiday music as well as some excellent renditions of rock and roll classics.

The stage was adorned with Christmas trees, lights, decorations, and presents as Setzer and his nineteen piece band hit the stage and performed ninety minutes of music full of enthusiasm, which had the sold out Seattle crowd singing and dancing in their seats and the aisle ways.

Setzer’s vocals and guitar playing were exceptional. He performed with maximum energy as his band belted out tunes covering many genres of music instead of an evening consisting of only Christmas tunes. Setzer and his orchestra played awesome versions of songs made famous by Santo & Johnny, Junior Parker, and Carl Perkins. One highlight was the band’s amazing version of “Let There Be Rock” by AC/DC!

As the big band took a mid-set break, Setzer took things down to the roots of rock – guitar, drums, upright bass and piano. This four piece belted out some enthusiastic rockabilly.

The biggest crowd pleasers were numbers by the Stray Cats. “Stray Cat Strut,” “Gene and Eddie,” “Fishnet Stockings,” and “Rock This Town” were met with large fanfare, loud singing-along, and thunderous applause from the crowd.

The band’s version of the “Nutcracker Suite” was by far the highlight of the evening. The Brian Setzer Orchestra finished the evening with “Jingle Bells” as snow fell inside the theater. The music was timeless, the musicianship of Setzer and his orchestra was spot on, and it was a magical evening for everyone who came out to take in this awesome and amazing show.