By Mike Baltierra on January 11, 2017@baltierraphoto 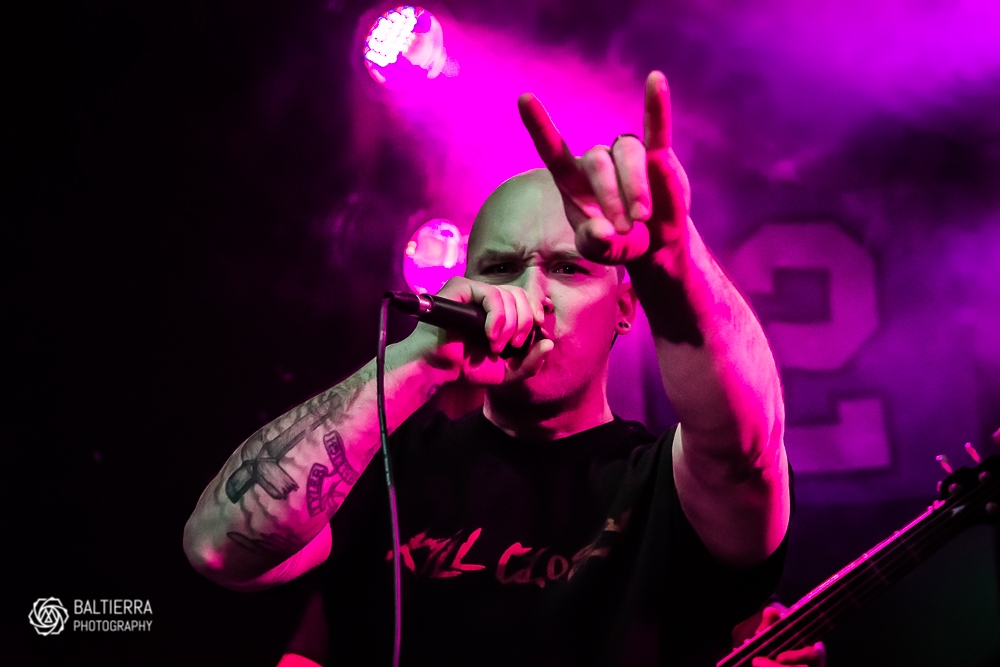 Stone Entertainment Group put on a killer show with an awesome line up at one of the South Sound’s favorite venue, Louie G’s Pizza. It’s still pretty amazing that a pizzeria is an awesome place to witness some of the areas up and coming bands, as well as some nationally known acts, with great sound, lights and awesome eats! Five different bands, each with their own unique style and sound provided the crowd with an escape from the winter’s frigid cold.

Getting the night started were Seattle’s Await the Avalanche with Superman Stevenson on vocals, Justin Hodge on guitar, Tyler Warden on bass, and Dylan Swensen on drums. They had a style that was definitely heavy and true to metal, which got the crowd pumped and in a moshing frenzy. The band played a quick set filled with some seriously heavy originals. Go give them a listen over on their Bandcamp page.

Next on the bill were Noctrium, who call Everett their hometown. The band is typically made up of Phil Stockard (Lead Guitar), Mick Greene (Drums), Shawn Thompson (Vocals), and Greg Blak (Bass),  but on this evening, the drums were handled by Drucifer Drummer. Noctrium played a set comprised of groove metal. They had a good amount of fans in the crowd who cheered them on, and the band fed off their energy.  Their sound is pretty hard to describe, and quite honestly, they play a style of music that really can’t be pinned into one style or genre of metal. The best thing is to head over and check out their songs on their Reverb Nation page.

Third on the bill were The Sunshine Wall, based out of Bremerton. The band is Mason Randles (rhythm guitar, vocals), Jeremy Klatman (lead guitar), Miles Thomson (drums, backing vocals) and Thomas Norman (bass). The Sunshine Wall must be fueled on energy drinks because they were bouncing all over the place, especially Randles and Norman. They played a high-energy charged style of metal, somewhere along the lines of Mastodon, In Flames, Three Inches of Blood and Machine Head. The band was very impressive and it was great to hear a band that had someone singing as opposed to doing the death grunts (no offense to death or grind core singers). Their latest release is also streaming on their website, do yourself a favor and give it a listen.

Next were Reton’s Salem Knights who, according to their Facebook page, have been keeping old school metal alive with their intense energy and fury. Kenton Holme (Lead Guitar / Vocals), Eric Weber (Bass / Vocals) and Drucifer Drummer (Percussion) were true to form, delivering on a brand of metal that is reminiscent of early versions of Iron Maiden, Judas Priest, Megadeth and hint of Black Sabbath. As musicians, they are getting better with each performance and the turn out to see this band is evident in the hard work they are putting in. Holme and Weber do a great job interacting with the crowd and their playful banter on stage makes this band fun to watch.

Closing out the evening were Maryville’s self-described seven headed monster, Kill Closet. Donnie (Vocals), Shalyn (Vocals), Char (Guitar), Chuck (Guitar), Matt (Bass), Bryan (Drums) and Neil (Percussion, Samples & Keyboard) brought the heavy with them. Their music seemed to cross many genres of metal, with some hints of Slipknot, Dope, Mudvayne and Pig Destroyer. Hard and heavy, with blast beats, the band was on full throttle from the start of their set to the very end. Those who remained witnessed a very entertaining band who loves interacting with the crowd and with each other. The crowd showed its appreciation with constant head banging and moshing.

The event was great, the lineup was excellent and worth the time and effort of everyone involved with the show, from the staff at Louie G’s Pizza to the great folks at Stone Entertainment Group and all of the bands involved. If you get a chance to check out any of the bands, do yourself a favor and do so! You won’t regret it.

Get out there and support local the local music scene!