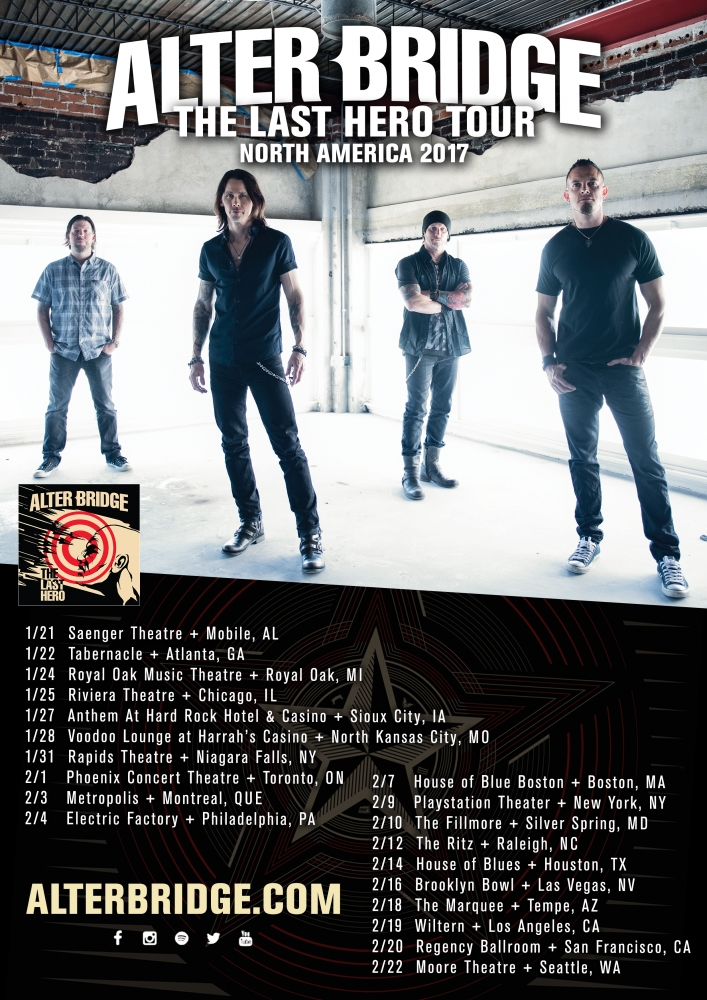 Hard rock titans Alter Bridge are currently on their first headline tour of 2017 across North America, wrapping it up in Seattle on February 22nd at The Moore Theatre. This tour is supporting their latest release, The Last Hero, which was just named one of Revolver Magazine’s Top 20 Albums of 2016. SMI contributor Jared Ream had the opportunity to speak with Mark Tremonti of Alter Bridge about life, inspirations, and the tour.

SMI: Hey Mark, how are you doing today?

Tremonti: Good, how are you?

SMI: Great, thanks for asking. How’s the tour going so far?

Tremonti: It’s going great, the stakes have really picked up, and people are coming out and really enjoying the show, so we’re happy.

SMI: Outstanding! You guys are in Montreal tomorrow night, are you expecting a pretty good show and turn out for that one?

Tremonti : Yeah, we actually just arrived in Montreal, and had a show in Toronto last night.   I came up here touring my solo gig. On those tours I noticed a big difference in the crowd reaction up here. So I told our agent to really look into Canada because I really felt it was growing. The Toronto show, we sold out the venue and we had a great show last night. So it’s expected to be more of the same tonight, so we’re really happy about it.

SMI: That’s awesome. I’ve been following you for years, what is something that inspired you to write?

Tremonti: You know, when I first picked up a guitar, it was what I was drawn to more than being a lead guitar player.   I wanted to sing, and write melodies, and create songs. There was just something about that magical creating something from nothing. You know I just totally love writing songs. It’s just a big part of me.

SMI: I hear you there. So between the creating of the music, and the performing the music in front of thousands of fans, which one do you think you get the bigger kick out of, or prefer.

Tremonti: They are both completely different deals. But I think the writing and the creation is the thing that I couldn’t do without. The performing is fun, and it’s very exciting, but the actual creation of the music is where the magic is for me.

SMI: As a musician I completely understand you. Thinking back to when you first brought Myles (Kennedy) into the project, what drew you to Myles and his vocals?

Tremonti: He just had this tremendous voice, and I’ve always dug tenors, tenors that did it well. And when we ended our previous band, I wanted to go in as different of direction as possible, to find somebody with a different sound, and Myles was perfect.

SMI: He’s definitely got a unique set of vocals. Everything he’s done with Alter Bridge, and his side project with Slash, as all been epic stuff. I’ve been told through the grapevine that you are a man that wears a lot of hats. How do you find balance on your tour life with everything you do on a daily basis?

Tremonti: My main priority is my family. So I just make sure that they get out on tour, or I get home during the middle of the tour. So I don’t go longer than two weeks without seeing them. My wife helps me out tremendously with the paying of the bills at home. You know I kind of do the big picture stuff, she’s the logistics person with the kids, and everything else. So, that is all I have to worry about, I just put my head down and write music. That’s my job.

SMI: I know exactly what you mean, I did 11 years in the military, and the being gone, leaving the wife to take care of the home front is most important thing. How did you feel the first time you ever saw one of your CD’s in the record store?

Tremonti: Oh it was great! Just seeing a CD in my hand the first time was amazing! Things like that just are some of the most exciting parts of the creating something that was in your head, then it’s on CD, then it’s on actual physical CD! It’s amazing!

SMI: I can’t even imagine what that would be like, I think I would faint the first time. I’ve been doing my homework about you, and I found out a lot of things about you, including that you have won a ton of awards for guitarist of the year and many others. Which one of the awards and accolades that you have received means the most to you?

Tremonti: Wow, that’s tough to say. I mean, I’m a songwriter, that’s my thing. So I guess winning the songwriter of the year award was a pretty important one for me.

SMI: I bet it was. I couldn’t help but notice that you won best guitar solo of all time for “Blackbird”. That had to have been pretty intense.

Tremonti: Yeah that one was. You know honestly, that was one that when I saw it happening, I was just honored and happy to be on the list of 30 guitar players, or 30 solos or whatnot. But, as it got closer to the end, and I saw that we were hanging in there, I kind of didn’t want to win. I just knew that if the solo didn’t win, there would a lot of scrutiny. You know the guitar world has a dark side to it. There’s a lot of people that either love you or hate you in the guitar world. There are just a lot of opinions. So, when you win something like that, it’s kind of like kicking a hornets nest. But it went over pretty well, and it wasn’t as bad as I thought it would be. In hindsight it was a great honor.

SMI: I’m sure it was. I see you have some signature guitars, the Paul Reed Smith signature series. How did it happen that you were given that opportunity?

Tremonti: Well I got a phone call from PRS artist relations folks and they asked if I was interested in their guitars. I said well of course. I had actually just spent a ton of money on a PRS guitar just a few months before they called me. They sent me out a McCarty model, I loved it, but it just didn’t fit my style of playing. For instance, the pickup selector wasn’t on the bottom of the guitar instead of being on the top like I was used to. The body was light, the tonal control was spongier than I was used to. So they sent me another guitar, same thing, wasn’t quite right. They moved knobs for me, they changed the tone, the weight, the feel, just everything. So after being just picky, they said, why don’t we just design a guitar for you and make it a signature model. So, that was just all me knowing what I wanted, and making their great offer. Because, at the time, it was just Carlos Santana and myself with signature models at PRS. And it kind of went from there. Just like you asked about the CD, seeing that first guitar opening that, I remember that exact moment when I opened that case, and I saw that guitar for the first time. I was completely blown away!

Tremonti: Well I grew playing a Les Paul Studio Lite so it was a big body. But the neck wasn’t a huge neck. It felt like an Ibanez type skinnier neck. But it had a real nice feel to it. But when the guitar first came out they had a neck carved that they only gave me for my guitar and it wasn’t in the stores, and I have had other artists play my guitar and they fell in love with it. It has been one of their top selling signature guitars. It’s done really well. I really love the guitar. We’re constantly making improvements on it. It’s just a spectacular instrument.

SMI: I imagine it is. So, you have Seattle coming up on the 22nd. Tons of people are looking forward to the show. You’ve been to Seattle before, what is one of your favorite places to go to when you’re in town?

Tremonti: You know it’s always just the shows. Man the shows have been, every time we play Seattle it’s just incredible. So I can’t get enough of playing live there. It’s tough city to get to, it’s so far away from most of the cities we tour in. But we usually want to get to that side of the country just for Seattle and Spokane mainly, then we’ll throw Portland in there. And, then work our way down to California.

SMI: February 22nd is going to be the last show of the tour. You have plans after you go home? Going to couch potato it for a while, or just get back into the studio?

Tremonti: I have about a month off, so the only plan I have is to have the guys from my solo band fly in. My drummer lives in town right near me, but my guitar player has to fly in from California. So we’ll probably just spend about 5 days getting a head start on things and just putting a few songs on the back burner for later on in the year when we get together again. And, then hopefully get a record out sometime in early 2018.

SMI: Awesome, I’m looking forward to that. I have one last question for you Mark. Of all the countries you’ve played in, and all festivals you played, what is your absolute favorite festival or country to play in?

Tremonti: I’d have to say England. It’s our largest fan base. The Download Festival has always been the anchor show of our tours. They just announced our involvement with the festival this year. We’ll be playing just before Aerosmith for their very last show ever in England. So it’s a big honor for us.

SMI: It’s always sad to see the rock legends we all grew up with throwing in the towel and calling it quits.

Tremonti: Well you come to a certain point where the travel and everything else just get to be too much when you get older.

Tremonti: Thank you and take care.

Tickets and VIP Packages are currently on sale and can be purchased at https://www.alterbridge.com/tour.