A Night of Rock and Blues at Highway 99 Blues Club 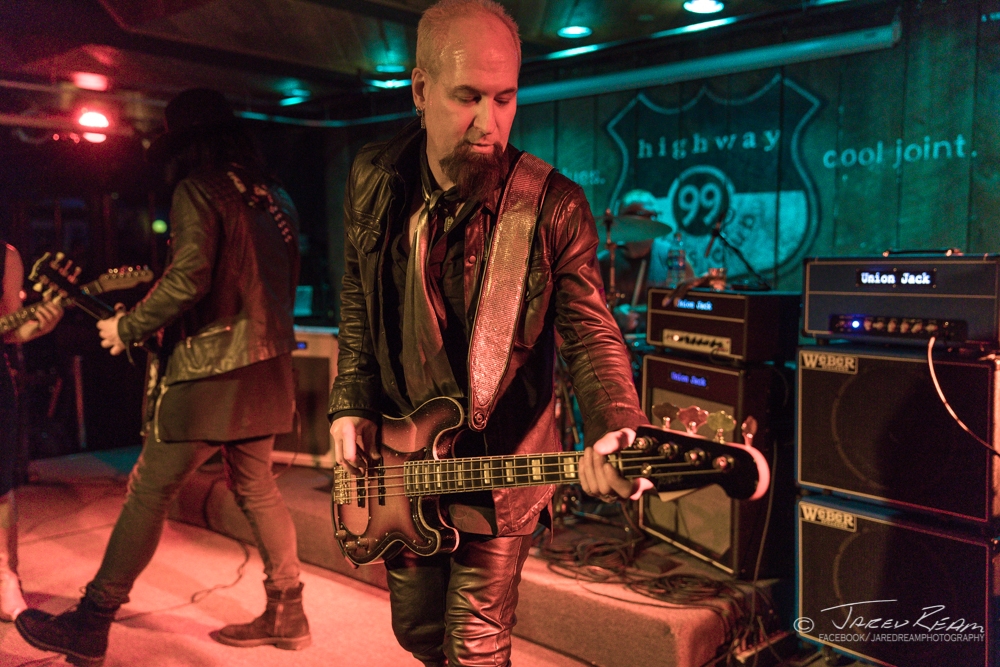 The Highway 99 Blues Club was the place to be last Friday night when The Adarna, Glenn Canon Blues Trio, and headliners The Guessing Game took the stage and rocked the faces of Seattle. Despite their young age, the members of The Adarna are seasoned professionals. Formed in 2011, they have being working hard, touring from coast to coast and gaining national and international fans alike. However, this was the first time for the rockers of The Adarna to be playing at Highway 99 Blues Club.

William Moore energized the audience with his lead vocals and rhythm guitar. Moore’s energy was pumping hard, and he brought it full throttle to the crowd, smiling and thoroughly enjoying himself on stage, engaging the audience. The Adarna’s songs have just enough pop to them that you can’t help but want to learn them. But the shredding guitar of Andreka Jasek brings it all back into perspective. She brought vibrant energy that rang through the other band members, tying them together with strong riffs. The band’s set combined the music style of Seattle with a gentle nudge of mainstream pop, a great concoction that they pulled off well. Oliver Spencer’s long arm bass style draws out the strength of the notes providing the glue for the rhythm section. Providing the heart beat to this Jet City Rock machine was the drummer known simply as Murdock. This powerhouse of a drummer played with what seemed like the energy of 20 drummers, but never once did he break a sweat or look concerned that he wasn’t right where he wanted to be. The Adarna was an excellent beginning to what was a great night.

Also first timers to Highway 99 Blues Club, The Glenn Cannon Blues Trio’s performance was a complete success. The Glenn Cannon Blues Trio was formed by Glenn Cannon, most widely known as the lead singer and guitarist of Windowpane, in early 2015 as an outlet for his deep seated blues fascination. Cannon’s vocals were velvety smooth and drew in the crowd. The lightning fingers of bassist Jeff Eason of Late September Dogs showed incredible talent and broad flexibility of styles. South paw drummer Wesley Peterson of Culture Shock held the tempo perfectly and looked as though he was thoroughly enjoying himself. The band performed original works as well as covers from artists such as Hendrix, SRV, and ZZ Top. The band fed the soul of the audience and the audience fed them back in return.

After taking several months off, The Guessing Game is back on stage. The band is the brainchild of Jeff Rouse, long time bassist of the Seattle native Duff McKagan’s band, Loaded. In an interview with the band, Rouse stated that it had been over 7 months since the band last performed together on stage. “Well, it takes some time to put together shows, and book shows, and I was out doing some other stuff, and we didn’t want to just throw something together,” Rouse elaborated. The band features Seattle rock legends Kathy Moore on backing vocals, guitar, and keyboards, Keith Ash on backing vocals and bass guitar, Gary Westlake on guitar, and Shawn Zellar on the drums. On this night, Westlake was absent from the performance, but as Rouse stated, “…bring what you can when you can and lets make it fun.” He went on to say that “this band morphs in and out of weirdness depending on who CAN’T be around.” Having a missing member didn’t slow The Guessing Game down at all. Rouse romanced the mic and the crowd with his smooth vocals, which blended together effortlessly with those of Moore and Ash. Compounding the beauty was the amazing guitar shredding ability of Moore, which was on point throughout the show. Moore put on an absolutely dynamite performance as her hands moved furiously up and down the neck of the guitar, playing each every string with perfection, pulling the crowd in with every riff.

Ash and Zellar played with energy and fervor, blending the melodies from Moore and Rouse with air tight rhythm. Their ability to provide what can only be described as “in the pocket grooves” are the core and basis to every song in The Guessing Game arsenal. With such an eclectic bunch of artists, it is easy to see why The Guessing Game is not a show to miss.

Listen to our full interview with The Guessing Game: