Experience Hendrix Shreds Its Way Into The Paramount 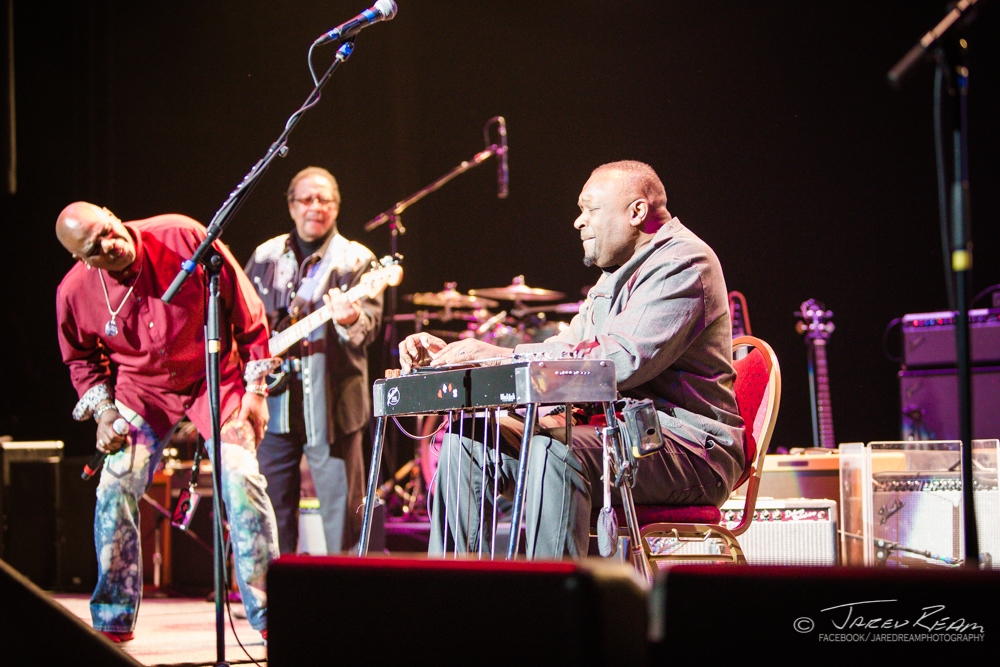 On a rainy Sunday night in Seattle, the third outing of the 2017 version of the Experience Hendrix Tour came to life for a sold out crowd at The Paramount Theater. Even after 46 years, Jimi Hendrix’s music and influence are alive and well.

The Experience Hendrix Tour is a multi-generational gathering of world renowned guitarists who pay tribute to the legend. Artists ranged in age from 36 year old Jonny Lang to the spry, 80 year old Buddy Guy. The entire night was an almost constantly changing lineup of artists on the stage, with the only constants being Scott Nelson (of the Kenny Wayne Shepard Band) on bass and Chris Layton on drums. They provided the rhythm for much of the show. The revolving door of singers and guitarists shuttling on and off the stage, in a variety of combinations, benefited from having a static backing band.

The show opened with bassist Billy Cox and Dweezil Zappa, accompanied by Layton on drums. This power trio was the perfect opener for a night filled with incredible talent. As the show progressed, the artists came out playing their respective covers of Hendrix tunes. Zakk Wylde of Black Label Society took the show to a whole new level right before intermission with a jaw dropping 10 minute solo rendition of “Little Wing.” Wylde’s performance did not allow the confines of the venue hold him back. Wylde played most of his mammoth solo while walking through the aisles, playing right in the faces of the audience members.

Kenny Wayne Shepherd, Jonny Lang, Mato Nanji (Indigenous), Noah Hunt (Kenny Wayne Shepherd Band), Keb’ Mo’, Henri Brown, The Slide Brothers, and Tim Austin (Buddy Guy’s Damn Right I’ve Got The Blues Band) all rocked the house in their own unique way. Guitar solos were never far away, but yet, for the most part the songs weren’t stretched too much past their original composition. Of course that doesn’t include the incredible dueling guitar battle on “Spanish Castle Magic” between Lang and Nanji that left the crowd enthralled and on their feet.

The audience’s energy ramped up as the evening progressed, and by the middle of the second set, it had become an intense love fest of blues. The crowd loudly urged on Shepherd’s soloing in “Voodoo Chile” and its heavier reprise, “Voodoo Child.” Nanji played every note as if he had something to prove. He definitely showed that he has the chops and the ability to hang with this elite crowd.

Hunt, vocalist for the Kenny Wayne Shepherd Band, belted out the vocals on the bluesy number “Gypsy Eyes” as Shepherd shredded his guitar right next to him. The power was palpable, and everyone in the audience ate it up. Coming from the more traditional blues side of the night, the insanely talented Keb’ Mo’ laid out generous portions for the blues loving members of the audience, getting them all fired up.

The evening was not left to just the youngsters. The legendary Buddy Guy took the stage and stole the show with his rendition of “Who Knows Fanfare.” Guy proved that you don’t have to be a young cat to lay down the blues.

If there was an award for the most animated guitarist of the night, it would have to go to Wylde, hands down. He ensured that the people on both ends of the stage got plenty of time to use their smart phones to capture him and his shredding guitar action. When the stage was no longer enough to contain him, he followed in the footsteps of Buddy Guy, who has been doing it for decades. Buddy, not to be outdone, got into the action as well, much to the amazement of the audience.