By Christine Mitchell on March 2, 2017@Housetornado37 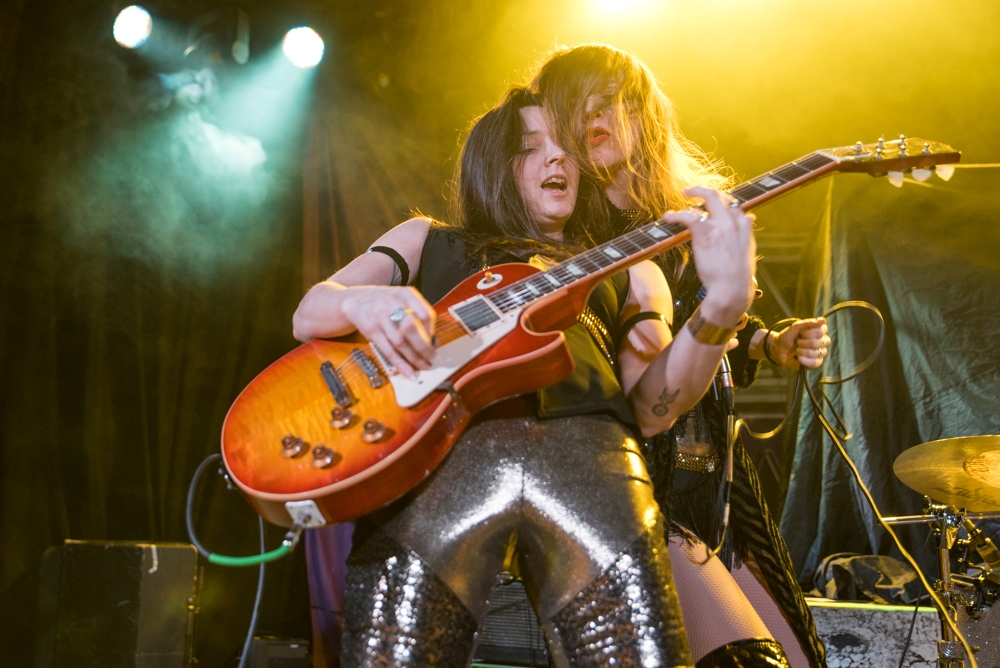 Thunderpussy swaggered into The Roxy Theatre like they owned it last Monday night, hitting the famed Sunset Strip in LA and taking it for all it was worth. Most of the room had never heard of them, but by the end of Thunderpussy’s set, which was forceful and stunning, folks were abuzz with amazement and full of questions: “Where are they from? Why haven’t I heard about them yet?” And “where can I buy their music?”

Those of us lucky to live in Seattle have known about its best kept secret for some time now. They’ve built a devoted following in the upper left corner of the USA over the past three years. And their album? It’s in the can. Ready to go. It’ll be released sometime this year, but the band remains tight-lipped about what form that release will take (although we know there will definitely be vinyl). As of this moment, however, the best way to learn about Thunderpussy is to see them live (although, if they aren’t playing in your area, please peruse their demos and videos).

Those at The Roxy got a full primer. The crowd started to realize the depth of the spectacle unfolding before them as the band launched into the gritty sexuality of “Fever,” lead singer Molly Sides’ powerful, sirenic voice shivering and soaring and her body twisting, hair flying. Indeed, a sirenic voice for a total siren; Sides was clad in patent boots and fringe that shimmied. She lounged, crawled, and dragged her body across the stage as guitarist Whitney Petty trailed her like a predator hot on the scent. The two share a symbiosis onstage that calls to mind those legendary pairings: David Bowie and Mick Ronson, Steven Tyler and Joe Perry, and yes, Mick Jagger and Keith Richards. It may sound ludicrous, but it isn’t. Not one bit.

Petty is becoming a guitar god. Someone recently remarked after a Thunderpussy show that he thought she was “ten feet tall.” Petty plays her licks with confidence, and at the same time as she’s radiating messy, bluesy rock across the room she’s prowling like a tiger, sometimes towering over a prone Sides and at other times sprinting across the stage to push and pull noise with bassist Leah Julius. Julius seemed more fierce than usual; swinging her bass up into the air and tossing her hair almost constantly and at times directly into the crowd. Her sequinned bra glittered from behind her instrument, matching her smile. Drummer Ruby Dunphy may be the newest (and youngest) member of the band, but she has serious chops. She matched the antics of the other three members by playing her kit with extreme force (and faces to match).

Throughout the set, it was obvious that Thunderpussy was enjoying every moment, the bandmates locking eyes with one another with a grin from time to time. “The Cloud,” a slowly building song that starts off sounding down home and ends with an orgiastic crescendo of instrumentation, gave the crowd a bit of a breather and showed the band’s range: they don’t just play hard, they play well. The room became unbearably hot during the set; glasses literally fogged up and the press of bodies in the filling room created sweat. Thunderpussy’s last two songs, “Welcome to the Disco” and what can only be described as their “theme song,” “Thunderpussy,” did nothing to dispel the heat. Instead, Sides urged the audience to dance, and dance they did. The room was especially filled with hoots and screams at this point in the set.

When it was over, it was as if the crowd had gone into withdrawal, and that’s when those questions from the beginning of this review began to be asked. They needed another dose of Thunderpussy. Stat.

Christine Mitchell has been poring over album liner notes pretty much since she acquired the skill of reading, and figured out the basic structure of rock songs at an early age. Whether it’s the needle popping into the first groove of the record, the beeps that signal the beginning (or end) of a cassette tape, or digital numbers ticking off the seconds from zero, music brings Christine happiness, ponderous thought, opportunities for almost scientific study, and sometimes a few tears. When she started attending live shows two decades ago, a whole new piece of the puzzle clicked in and she has been hooked ever since.
Related ItemsChristine MitchellFeatureThe Roxy TheatreThunderpussy
← Previous Story Run the Jewels’ EL-P & Killer Mike Run the Showbox Sodo
Next Story → John 5 and the Creatures kick off their US Tour at Louie G’s Pizza