Whitney Mongé’s Soul Is No Secret 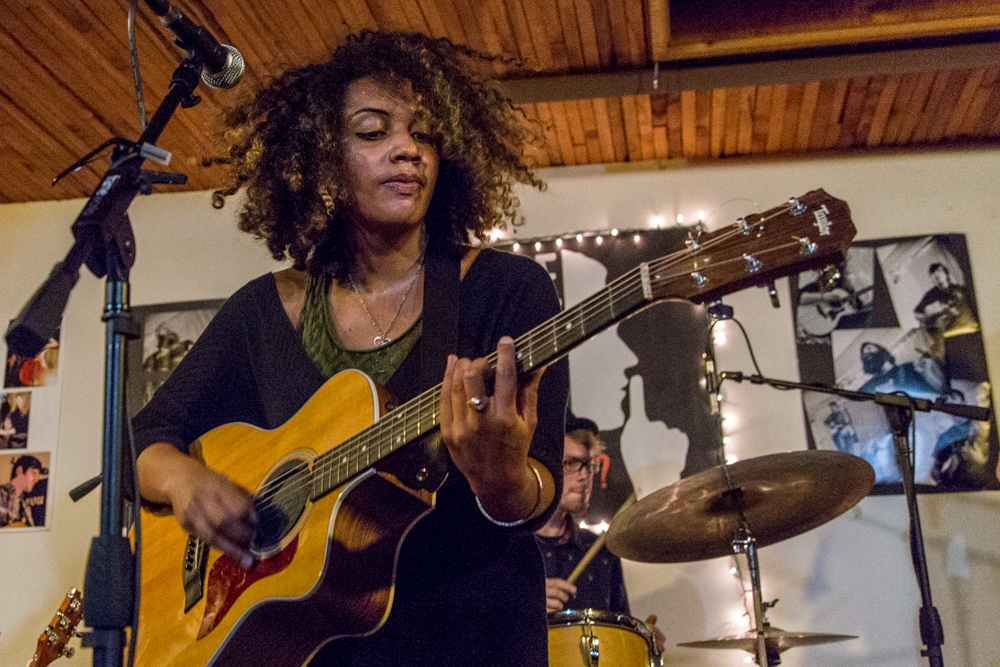 Instruments littered one side of a hidden loft home, somewhere on Capitol Hill, amidst a seemingly endless sea of microphones and amps. The scene was the setting for a sold out Seattle Secret Show/Seattle Living Room Show, hosted in a generous couple’s hipster-heaven space, complete with twinkling lights and raw plywood floors. The night’s artists, Whitney Mongé and Dirty Revival, brought in devoted fans, all of whom inched as close to the bands as possible, creating the type of intimate connections rarely developed between musicians and their fans.

Performing as a seven-piece, Portland’s Dirty Revival blew the crowd away first. Their sound was everything, a kitchen sink of influences that included soul, jazz, funk, and more. Hip hop reared its modern head, gospel bled from Sarah Clarke’s vocals. Everything was gritty and raw and real.

While Clarke was clearly the leader of the pack, the beauty of DR is that you can tell every member is integral to their work. Throughout their solid set, every instrument, every personality, was given plenty of time to shine. A cover of Marvin Gaye’s “What’s Going On” inspired Clarke to speak about the state of society, and she introduced their original “Lay Me Down,” with a message on homelessness and making sure we all take care of each other.

Bouncing between protest and party, their talents weren’t lost on the crowd, who danced and sang along, clearly in the know about this diamond in the local rough. Their trumpet player was on only his second night with the band, yet was a seamless addition to the big, brassy horn section. Ending their set with Nirvana’s “In Bloom,” – in DR’s hands a massive gospel-rock track with guitar solos as big as Clark’s vocals – the band left it all on the stage.

With the crowd more than pumped up, the floor was reset for Mongé. Having begun her musical history as a busker in Seattle’s Pike Place Market, Mongé has sold out her first three shows of the year. This is a local songstress earning rave reviews with mesmerizing performances and massive soul, and this show was no exception. She took the stage with a talented four-piece band in tow, noting “We’re gonna start this off in the only way I know how, and that’s slowly.”

The first track, “Tomorrow,” off her 2014 EP, Steadfast, was a slow burner oozing with soul, and Mongé proceeded to deliver an enthralling set full of both acoustic and electric guitar, plenty of solos, and intimate connections. She mined the fertile ground of past relationships for burning tracks of passion and heartache. Her voice was somehow both trembling and incredibly clear, with deep, warm tones. “Get Gone” made the room get funky, and she brought out friend Jon Yoon – someone she met via the Pike Place connection and Melodic Caring Project – for some ukulele assistance on the classic “My Guitar Gently Weeps” and closer “Crash.”

With a new album in the works for later this spring, Mongé is gaining deserved fans left and right. Catch her live for a show that resonates with emotion, intensity, and soul-affirming warmth.