By Christine Mitchell on March 24, 2017@Housetornado37 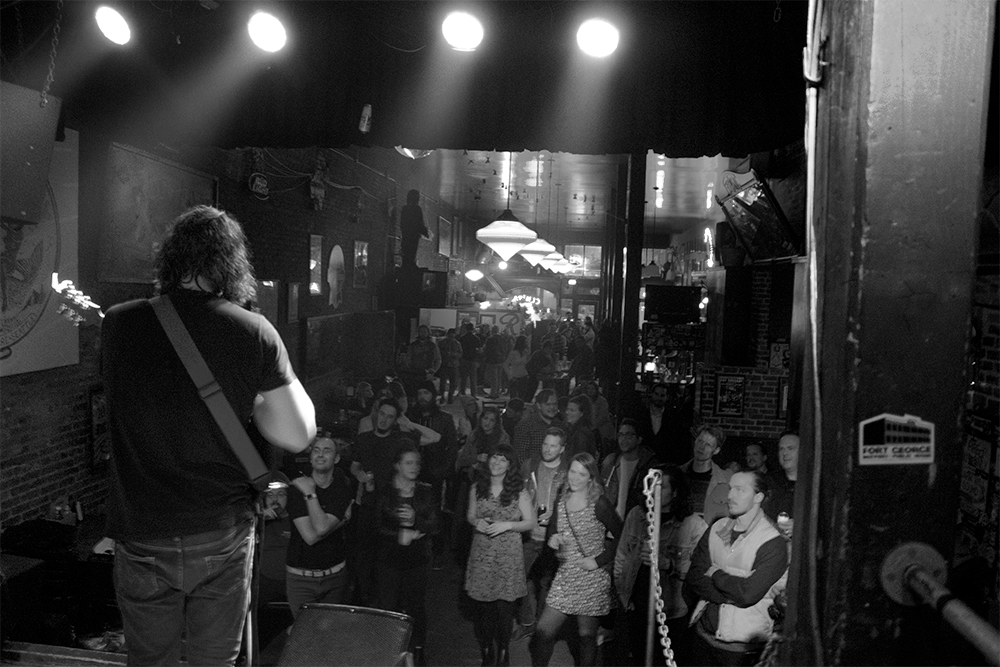 Leava at The Central Saloon (Photo by Ryan Alexander)

SMI is proud to present this review and photo gallery created by two guest contributors heavily involved in the local scene in Everett. Henry J is the producer and host of The Stereo Wire, heard every Friday night 8:30 to 10:30 pm on 90.7 KSER FM in downtown Everett Wa. Ryan Alexander is an artist and the voice/guitar of the band Crystal Desert.

The Central Saloon in Pioneer Square played host to Boots to the Moon, Leava, Verlaine and Campion on Saturday March 18, with Everett’s own Leava celebrating the release of their EP The Lovely Grind in front of a full house in Seattle. Here’s how the night shook out:

Campion was the first to the stage and set the tone for the night beautifully. If you haven’t seen Alex Campion work his set live, it’s like an exercise in musical tightrope walking. Campion manipulates two keyboards, a laptop, sampler, guitar, and bass as well as sings. He live-loops instruments, triggering them via beat pads and foot controllers to create multi-layered electronic soundscapes that build and morph throughout compositions. It’s a daunting display that adds more anxiety to an already anxious set.

Halfway through the set, Campion started into a cover of Haddaway’s “What Is Love,” but stopped short of the first verse, not happy with how the song was shaping up.

“If Adele can do it, I can do it,” Campion said to chuckles. That’s one thing that I admire about Alex – he won’t deliver a half-assed song to the audience, and has the fortitude to stop if he’s not happy. His second attempt (and the rest of the set) went off without a hitch. Campion’s new EP will be out later this year. Catch him next at the Fisherman’s Village Music Festival in Everett.

Up next was Seattle indie four-piece Verlaine, whose tight sound powered them through their set. Verlaine’s use of guitar swells and soaring choruses reminded me of 2001-era Death Cab for Cutie, if Death Cab never stopped rocking out at the end of their set. Verlaine’s next appearance will be April 30 at High Dive with The New Up, Subways on the Sun, and A Breakthrough in Field Studies.

Leava was the main reason I was at the Central to begin with, and they made the drive south worth it. Frontman Simon Nicol is a bit of a big deal up in Everett, having produced records from Everett standouts Crystal Desert, TELLERS, Oliver Elf Army, and Nail Houses. It also helps that the full band edition of Leava (consisting of I Will Keep Your Ghost member Doug Evans on bass and Kendrick Barnes rounding out the rhythm section on drums) is somewhat of a rarity, and the three-piece didn’t disappoint.

It was Leava’s release party that night for the two-song EP titled The Lovely Grind. Simon and company ripped into their new single, “Caffeine & Fashion,” a boiling, seething song filled with cavernous reverb and a chugging, hectic pace which is a departure from more dour earlier material. The band was cohesive and tight as ever, even with Evans playing a show with I Will Keep Your Ghost the night before.

Speaking of band chemistry, Leava as a unit seemed jovial on stage – with the usually stoic Nicol flashing smiles to the other members. Even a problem with Nicol’s pedal board was handled with grace. When the issue was sorted and reverb returned to the frontman’s rig, Nicol yelled, “welcome to the Leava release show!” to laughter and a round of applause.

The new-sound Leava was *impressive, and I can’t wait to hear what’s next. See Leava with The Raven & the Writing Desk March 31 at the W Hotel.

The headliners for the night were Boots to the Moon, who delivered a spacy, reverb-soaked set to cap off the night. Frontman Jo Castor drew the showgoers in with a stuttery stage presence and yelping vocals that added an arresting quality to their set. This was my second time seeing the band (they played a Stereo Wire show with Leava in Everett back in December) and the first time I was really able to sit and enjoy them. I was captivated mostly by bassist Zach Warnes’ bass playing and the lead guitar work of Boots to the Moon producer Rick Hoag, who was filling in for regular guitarist Jon Wesley. Boots to the Moon will be playing Upstream Music Festival.

Christine Mitchell has been poring over album liner notes pretty much since she acquired the skill of reading, and figured out the basic structure of rock songs at an early age. Whether it’s the needle popping into the first groove of the record, the beeps that signal the beginning (or end) of a cassette tape, or digital numbers ticking off the seconds from zero, music brings Christine happiness, ponderous thought, opportunities for almost scientific study, and sometimes a few tears. When she started attending live shows two decades ago, a whole new piece of the puzzle clicked in and she has been hooked ever since.
Related ItemsBoots to the MoonCampionCentral SaloonFeatureHenry JLeavaRyan AlexanderVerlaine
← Previous Story Bradford Loomis, Lowlands celebrate new music releases
Next Story → Rickie Lee Jones astounds at The Neptune