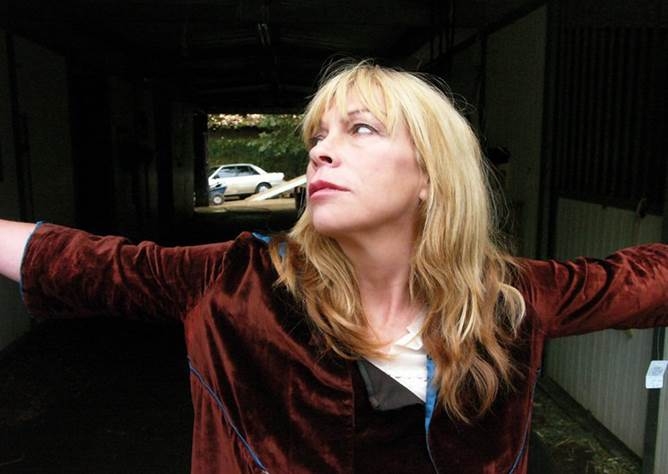 It’s only been a year since Rickie Lee Jones last played in Seattle behind her lovely new record The Other Side of Desire, but from the stoic anticipation one could feel from the near sold-out crowd you’d think that she hadn’t been in town for decades.

Rickie Lee is on an extended tour with Madeleine Peyroux, and apparently they’re taking turns opening for one another, and on this windy Spring evening Madeleine took the stage first.

Raised in America and France, Madeleine cut her chops singing on Paris streets, and one could hear traces of European sophistication in her long set of 1940s-inspired songs, peppered with some jazz and pop as well. She was accompanied by a stand-up bass and jazz guitar, and with Madeleine on ukulele and acoustic guitar they produced a vintage cabaret vibe that worked well in the cozy and ornate Neptune Theater.

Madeleine isn’t afraid to mix politics with her performance, and there were numerous critical references to President Trump throughout her set, delivered with big-mama sass that Peyroux expounds naturally.

Rickie Lee Jones has bounced from Phoenix, AZ to Olympia, WA to Los Angeles, then to New York City, and now resides just outside of the French Quarter of New Orleans. Her latest record, made possible with public funding, was recorded in New Orleans with local musicians, and she brought two of these musicians on the road; 28-year-old Cliff Hines on electric guitar and multi-percussionist Mike Dillon.

Mike came onstage first and launched into an unexpected and thrilling vibe performance, which then morphed into a drum solo, somehow. Cliff came onstage to add vibrant guitar shades that served as a proper entry for Jones. With her acoustic guitar strung around her neck, and dressed in soft, earth-tones, Rickie and the band delved into “Weasel And The White Boys Cool” from her 1979 debut. The audience was clapping along with the funky track immediately, and shouts of “We love you!” pelted Jones like raindrops on a runaway hen.

It may not be appropriate to say that it was shocking to hear Jones’ voice sounding so pure and clear, but she’s lost none of her vocal range since 1979, and that’s quite remarkable considering her well-known history of reckless living.

Jones was generous with her set selections, playing a snappy “Coolsville,” a mournful “On Saturday Afternoons in 1963,” and a remarkably beautiful “The Last Chance Texaco” from her debut record, and lively versions of “Pirates,” “Living It Up,” and “We Belong Together” from the Pirates album.

Throughout the set, Cliff Hines’ guitar playing was a wonderful distraction. Obviously influenced by Jeff Beck, Hines had a pallet of sounds that he selected with precision, adding nuance and dynamics to the songs, and subtly showcasing his impressive technique. Mike Dillon was also a wizard of percussion, playing handheld shakers to emulate desert sounds while simultaneously keeping time on an array of cymbals, or complimenting Rickie’s story-songs with conga drum flourishes or hard 4/4 beats on a full kit.

If you’re lucky, you occasionally get a chance to attend a concert where there are truly magical moments, when the line between performer and the audience disperses, and a connection is made that transcends time and place. Incredibly, there were at least two of these moments at this show. Rickie Lee Jones’ lifetime of hard knocks is front-and-center when she sings, and much like Amy Winehouse, Rickie’s voice is organically laced with deep pain and soul, and when that’s mixed with the longing embedded within her (sometimes) little-girl delivery it can break your heart.

After ten songs Jones said goodnight. No “Chuck E.’s In Love” this time, but after an evening of intimacy and pure beauty, a pop single would’ve felt like cheating.

Brent is a native Washingtonian who spent seventeen years playing in rock bands in NYC in the eighties and nineties. Highlights include sharing the bill at CBGB's with Smithereens, Vernon Reid's Living Color, Modern English, Green River, and hundreds of other awesome bands. I now live in South Seattle and spend my days herding commuters.
Related ItemsBrent StavigFeatureRickie Lee JonesThe Neptune Theatre
← Previous Story Leava’s ‘Lovely Grind’ release at The Central
Next Story → Panic! At The Disco’s Emo-Pop Extravagance