By Mike Baltierra on May 15, 2017@baltierraphoto 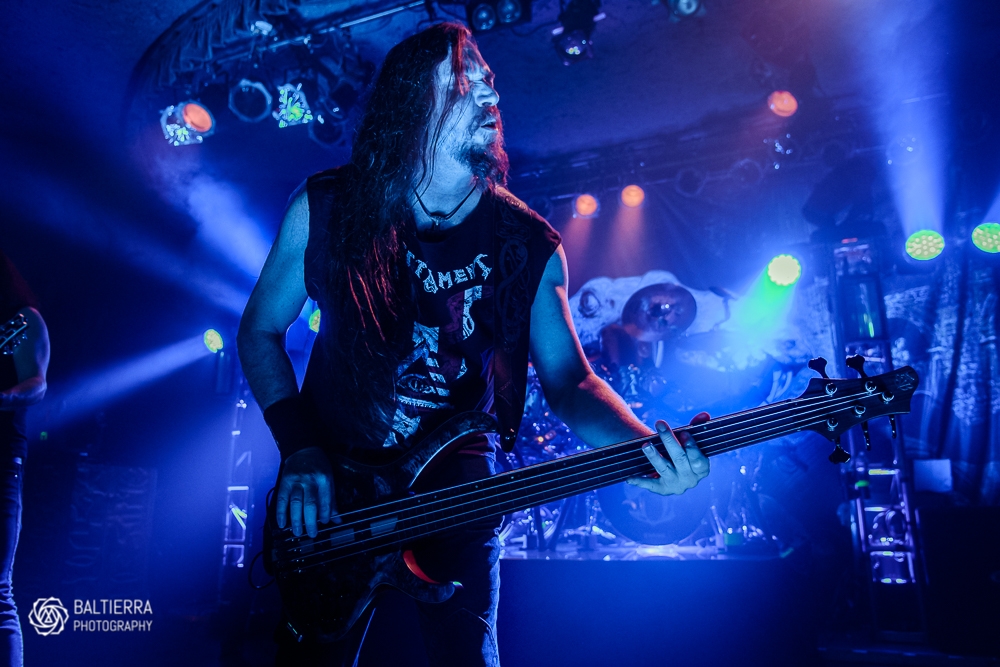 Legendary San Francisco Bay area thrash metal legends Testament performed to a jam packed crowd on Thursday at the Showbox at the Market in downtown Seattle. The band is currently on a North American Tour in support of their latest release, The Brotherhood of the Snake. Many longtime fans, many who were in attendance with their children, got the venue early to get their heavy metal fix.

The house lights dimmed and the stage was illuminated with fog and blue lights as Testament, which consists of Chuck Billy (vocals), Alex Skolnick (guitar), Eric Peterson (guitar), Steve DiGorgio (bass) and Gene Hogland (drums), tore into the title track off Brotherhood. The crowd started head banging and formed a large mosh pit. The band then jumped into “Rise Up” off the Dark Roots of the Earth album. Billy had the audience singing the chorus with him; he would yell “Rise Up!,” and the crowd would reply “War!”.

The band’s setlist spanned the entirety of their thirty plus year history. “Pale King,” “Centuries of Suffering,” and “Electric Crown” were greeted with enthusiastic appreciation from the crowd. Billy thanked longtime fans for sticking with the band and spoke of the band’s origins, playing clubs in the Bay Area that have long since closed their doors, such as the Omni in Oakland and the Stone in San Francisco. The band then launched into a song that has always been a mainstay in their set, “Into The Pit,” which not only had the entire floor in a huge circle pit, but may started to crowd surf, much to the delight of the band.

Ripping through “Low,” “Throne of Thorns,” “Strong Hold,” and “The New Order,” Testament had their foot on the gas pedal and did not let up. The band showed no signs of slowing down, and the crowd was just as fired up as the band, as shown by the continuous moshing, head banging and crowd surfing. The band came back to perform “Practice What Your Preach” and “Over The Wall” for their encore, calling it an evening after having played an impressive seventeen song set that was fast and heavy from top to bottom.

Brazilian heavy metal band Sepultura were in direct support for the evening. The band, which is made up of Derek Green (vocals), Andres Kisser (guitar), Paulo Jr (bass) and Eloy Casagrade (drums), played a solid set list that included new material as well as the classic staples of their set list. “I Am the Enemy,” “Phantom Self,” “Desperate Cry,” “Refuse Resist,” and “Roots” got the crowed fired up as everyone eagerly awaited the evening’s main event.

New York based metal heads Prong started the night off. The band played a solid mixture of music, focusing on their last few releases, with fan favorites such as “Ultimate Authority,” “Beg to Differ,” “Cut and Dry,” and the ever popular “Snap Your Fingers, Snap Your Neck.”

Encore:
Practice What You Preach
Over the Wall