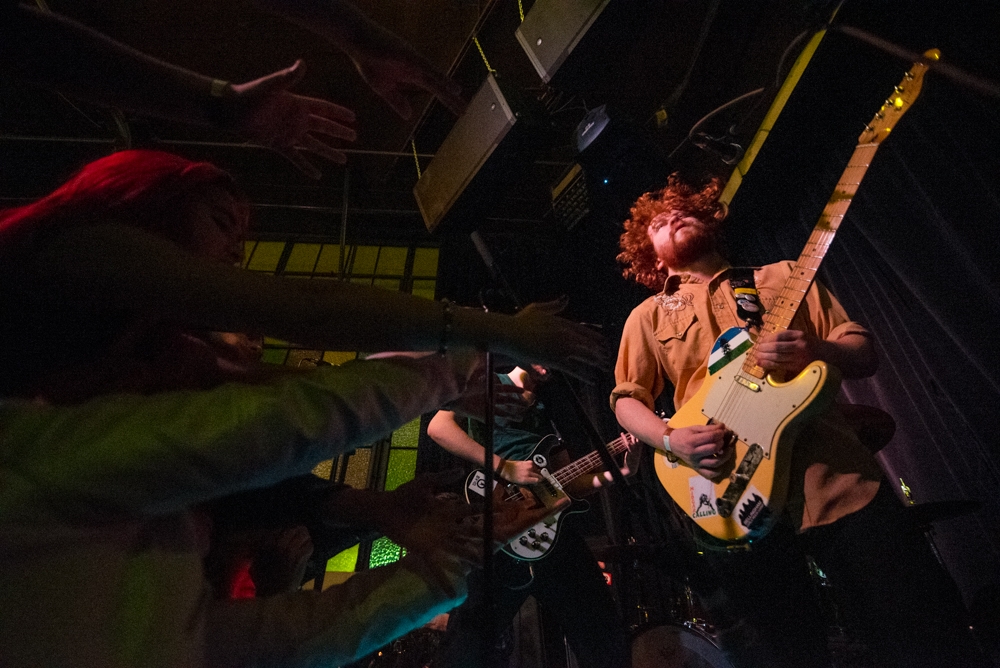 Surfy, punky, horn-laden…Actionesse is a band that defies most any box you try to stuff ’em into. One thing is guaranteed, though…you’re gonna have a good time at an Actionesse show, and you’ll walk away a fan. Because it’s the full meal deal with this band: a head-banging, red-mopped lead singer (Ian Reed) who is very enthusiastic with his guitar, a bassist (Paddy Moran) who interfaces with Reed and exudes his own brand of goofy, and another animated mop of hair named Jimmy Colven behind the drums. But wait, there’s more: lead guitarist Phil Kaltenbach is a more stoic, Ox-like guy, and then there’s Joel Kenworthy, the master of the many wind instruments in the band. Like a brass Swiss Army knife, during a show he can be seen rotating from trombone to flute to saxophone to whatever any given song calls for at that moment. Their music unfurls like a chaotic, epic, demented novel. An Actionesse show is an enthralling event, and you never know who might show up. It just might be a full marching band…not kidding.

The band has a sensational sense of humor, from the insane polka tempo of some of their songs to the cover of their last EP, Mignon, which featured a knitted pig head on a platter with veggies. Their latest EP, Fortune, drops tomorrow on Bandcamp, and Actionesse is celebrating its release with a tour down the West Coast next month. SMI took a moment to chat with bassist Moran to get the nitty gritty on the band, the tour, and the state of Reed’s neck from all of that thrashing he does. In true Actionesse form, Moran’s answers were hilarious and on point.

SMI: Entertain us with the history of Actionesse.
Moran: Actionesse began as a series of bacon-wrapped, turkey-stuffed dumplings served with a light cream gravy. Served hot with seasoned potatoes, Actionesse began performing in Seattle in May of 2015. We started our project in Bellingham, having all come from different projects, (and started) performing and writing the first songs. We all kind of moved down here at separate times so there was a good stretch of long drives to and from rehearsals. In early 2016, Jimmy and his partner moved down here. This was shortly before the Four Corners project started recording. Four Corners, I think, should get a substantial amount of credit for where we are right now, which by the way is still at the bottom. But after working with a lot of bands and putting out some more music, I like to think we’ve made a bit of progress on forging our ass-groove in the couch that is the Seattle music scene.

SMI: Tell us about Fortune.
Moran: The new album is…really short. But it’s what we wanted. We’ve got these three songs that seem to go together well enough. The songwriting process has felt so streamlined lately, its crazy to think about but we’re already well into writing the next release, which will be a full length. Though I think final runtime might determine whether or not we can call it that. Ha. We write a lot of short songs.
SMI: How are you getting around on tour? Do you have a van, or…?
Moran: We bought a van. Currently there’s been quite a lot of drama on the van’s name. I think some of the ideas were Milk Farts…Chunderdome…just a lot of bullshit nonsense basically. But hey, look at our band name. We will all drive except Joel because he’s a special little boy.
SMI: What sort of grub to you plan on packing on tour?
Moran: Joel will bring and eat a lot of rice and beans on tour. I am going to try to eat somewhat healthy because gas station food nearly killed me last time I toured. Ian and Joel were on that tour as well. I suspect Jimmy and Ian will be hunting for the legendary local cuisines, which I think we all can get down on. I have no idea what Phil will eat on tour but I’m excited to find out.

SMI: Does Ian (Reed) ever hurt his neck with all of that headbanging?
Moran: Ian had a titanium neck implanted when he was five, which functions very similarly to the T-1000 in that it has a limited shapeshifting/regrowth quality. He never, ever hurts his neck from headbanging. At rehearsal we practice that kind of stuff against big rocks in the backyard of the Action Nest.

SMI: How did you come to have killer horns in the band?
Moran: We have horns in the band because Joel is like a flying brass unicorn that feeds off of magic and love. I think without Joel we might just be another loud rock band…

Actionesse hits the road this June, starting off with a date opening for Crystal Desert’s “Evening of Darkness” at The Anchor Pub in Everett on June 3rd (black attire required.) After that, the tour starts off proper, with the following dates:
6/10 Portland, OR @ Bunk Bar
6/11 Eugene, OR @ Old Nick’s Pub
6/12 Sacramento, CA @ The Colony – Sacramento *
6/13 Oakland, CA @ VAMP vintage • art • music for the people
6/14 San Francisco, CA @ The Honey Hive Gallery
6/15 Ventura, CA @ TBA *
6/16 Los Angeles, CA @ Bonnerhaus *
6/17 San Diego, CA @ M-Theory Music *
6/20 Las Vegas, NV @ Hard Hat Lounge
6/22 Reno, NV @ Recycled Records (Day show)
6/22 Reno, NV @ The Loving Cup
6/23 Eugene, OR @ The Campbell Club
Starred dates indicates that Actionesse will be playing with Cheap Horse, a funky, glamtastic Santa Cruz band, which should prove to be a crazy cocktail clutch of shows. Check ’em out on Bandcamp. And be sure to groove to Fortune tomorrow as well. Actionesse will be playing a show back in Seattle at The Sunset on July 16th. You can bet we’ll be there, trying not to get a kink in our necks.

Christine Mitchell has been poring over album liner notes pretty much since she acquired the skill of reading, and figured out the basic structure of rock songs at an early age. Whether it’s the needle popping into the first groove of the record, the beeps that signal the beginning (or end) of a cassette tape, or digital numbers ticking off the seconds from zero, music brings Christine happiness, ponderous thought, opportunities for almost scientific study, and sometimes a few tears. When she started attending live shows two decades ago, a whole new piece of the puzzle clicked in and she has been hooked ever since.
Related ItemsActionesseArtist FeatureArtist SpotlightChristine MitchellFeature
← Previous Story Downstream: Goofus, Gallant, and Genius
Next Story → Bush’s Emotional Return