A Fun Filled Night with Dollskin at Chop Suey

By Mike Baltierra on August 19, 2017@baltierraphoto 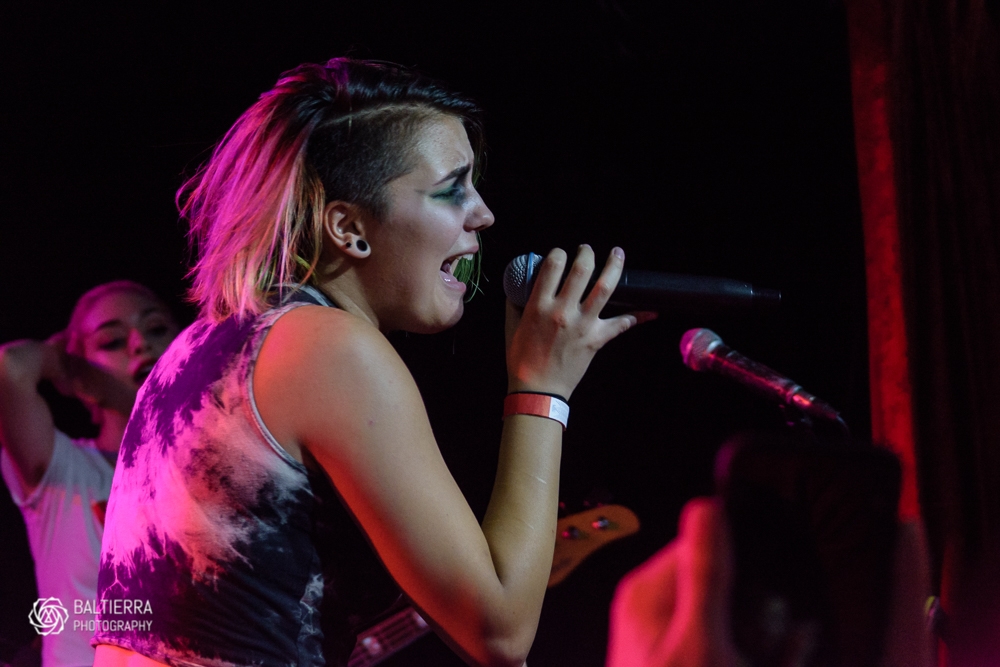 Dollskin, who are based out of Phoenix, AZ, made a stop at Chop Suey in Seattle. The band consists of Sydney Dolezal (vocals / guitar), Alex Snowden (lead guitar), Nicole Rich (bass), and Meghan Herring (drums). Dollskin seems to be touring non-stop, with this being their fourth visit to Seattle in the last couple of years. The most recent was this past June during the Vans Warped Tour. They are touring in support of their latest release, Manic Pixie Dream Girl.

The all-ages show was attended by many a young fan who happened to bring their older siblings or parents along with them – some of the siblings and parents may not have been a fan of Dollskin prior to the show, but their awesome stage performance, energy and catchy tunes was able to win over a handful of new fans.

Dollskin, who have been compared to bands such as The Donnas, The Go-Go’s, and The Runaways, state they are influenced by bands such as Perimore, Bikini Kill, Green Day, NOFX, and the Foo Fighters as some of their influences. They were discovered by Megadeth’s bassist David Ellifson. The band participated in a high school talent show in which he was the celebrity judge. The band won the contest, and Ellifson is now the band’s manager. Talk about a win-win!

The band has always put on a solid, energetic set, this night being no exception. The band keeps getting better with every performance. The relentless touring and performing live as often as they do surely helps. The band whipped the crowd into a frenzy, many singing along as well as getting into the sound and moment of the music. The younger ones enjoyed themselves in the circle pit while the parents were off to the side, safely watching the energy of the band and the crowd intensify in front of them.

In direct support of Dollskin were Next to None, who are a progressive metal band and are based out of Lehigh Valley, PA. The band is made up of Kris Rank (bass), Max Portnoy (drums), Thomas Cuce (keyboards / vocals), and Derrick Schneider (guitar). The band wear their influences on their sleeves, with the sound being heavy on the progressive side with a dash or two of extended range djent style crunchiness thrown in.  Though the band hand some technical challenges at the beginning of their set, they pushed through and delivered a killer set that had everyone in attendance headbanging along. Next to None is definitely a band you need to keep an eye for.

Getting the evening started were Seattle locals Amsterdam. The four piece (at least on this night) female fronted pop punk band played original material that got the crowd out of their seats and onto the dance floor. It was a very good complement to the evening’s line up and they performed exceptionally well. They are also another band that you need to watch out for.