By Kriston McConnell on September 6, 2017@Kristonisms 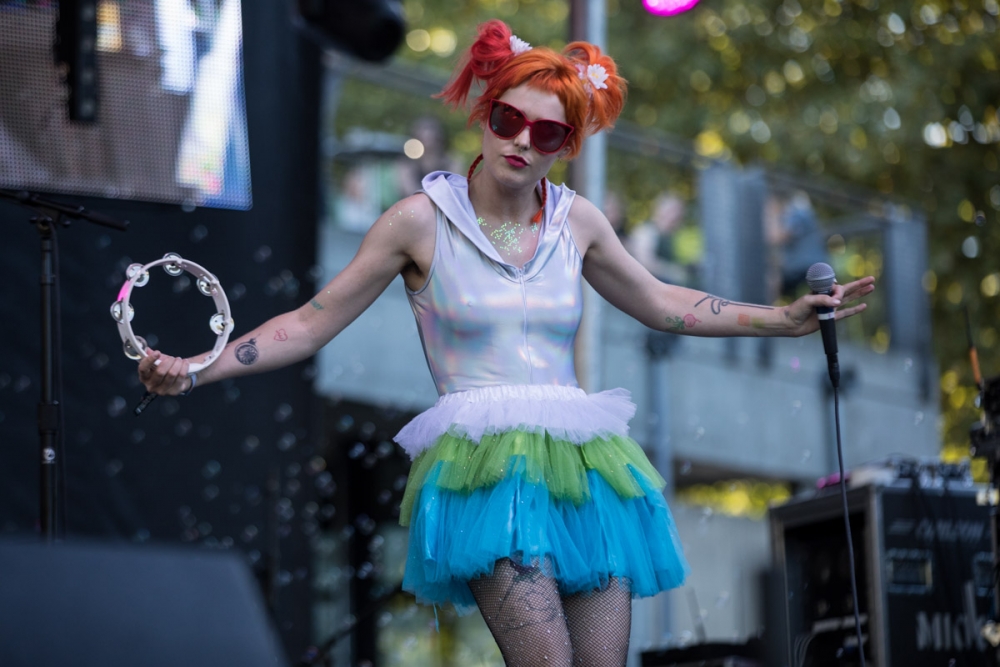 The second day of Bumbershoot was blisteringly hot, but that didn’t stop thousands of concertgoers from rushing to the festival to see some of their favorite bands.

One of the most exciting sets early in the day was by the Brooklyn-based rock/hip hop outfit The Skins. They are a young band who are already making waves in the music industry. Their performance was energetic, unapologetic and a must-see. They released their debut EP last year, and are expected to release some new music again in the near future. That is something many of us will look forward to hearing.

Highly Suspect had one of the top performances of the afternoon/early evening. The lead singer has an excellent stage presence and knows how to work an audience. Whether he was aware of it or not (our guess is that he was), he had the audience’s unfettered attention. They were eating up the gloomy, brooding musician gimmick. A surprising performance was put on by the Icelandic outfit known as Kaleo. Blues and country aren’t particularly popular in the Seattle area, but Kaleo managed to draw an impressive crowd for their 45 minute set. They were not the most exciting band to watch, but the lead singer has a great voice which was enjoyable to listen to.

Tacocat performed on the Monster Energy Fisher Green Stage around the middle of the day. They are an SMI favorite, as they always put on a (literally) colorful, energy-packed show. The singer, Emily Nokes, sports explosively bright orange hair with a pair of matching orange sunglasses. Tambourine in hand whilst wearing a tutu and glittery gold platform shoes, she owned the stage. During their set they invited friends on stage to demonstrate how not to talk to women for their song “Hey Girl.”

A huge stream of fans made their way into Memorial Stadium to catch Weezer’s set. The band is iconic and it’s no surprise that many concert attendees were eager to see them. In addition to performing some of their biggest hits, Weezer also performed a a couple of covers throughout their set, including a painfully awkward and somewhat dull cover of OutKast’s “Hey Ya!”. They should have left that off of their setlist, because the crowd didn’t get it. A more successful song was their 2015 ode to women, “Thank God For Girls,” during which a reel of influential/powerful women played behind them. Some of the women included were Michelle Obama, Oprah, Tina Fey, Brienne of Tarth (Game of Thrones), Harriett Tubman, and many others.

The three headliners for the evening were Dillon Francis, Lorde and The Roots. Each offered a unique listening experience, so it was a shame that their sets overlapped so much. The lines for Key Arena were mind meltingly long, but Dillon Francis’ set was larger than life and practically filled the venue. On one of the other main stages, The Roots gave an unforgettable performance that new and old fans alike enjoyed until the very end. It’s difficult to have a bad time when a tuba player is waltzing around on stage. When a group has been around for 30 years, it’s easy to understand how they’ve come to master the art of entertaining a crowd.

Lorde was a performer that many fans were looking forward to seeing. She is an international pop star who has never graced the Bumbershoot stage before, and the throngs of screaming teenage fans were a clear indication of their excitement to see her live.

A few times between songs Lorde would stop and talk to the crowd and give personal anecdotes. She has been hailed as one of the most down to earth pop stars out there today, so this comes as no surprise. Before performing “The Louvre,” she stopped to explain the song is about having a crush on someone, and being absorbed with thoughts of them. She dedicated the song to everyone in the crowd to currently had a crush on someone. While she and her dancers had plenty of energy, her music wasn’t as exciting as one would expect for a huge stadium performance. It’s possible that her set would have been more exciting if it were indoors where the sound couldn’t escape and the stage lights were more dramatic. Aside from that, the performance itself was pretty solid and she closed out the night with some of her top hits, including “Royals,” “Team” and “Green Light.”

Despite the heat, Saturday was a big success for Bumbershoot. There were many memorable performances and plenty of fun to be had.

Kriston began her writing career as a passionate music fan. She attended dozens of shows, purchased CDs, vinyl and even cassette tapes of artists she barely even heard of. Shortly after joining a band's street team she happened to meet blogger Jacob Tender (now with Alternative Press) who asked her to write for his blog. After a couple of months he joined the staff of Under The Gun Review, and brought her along for the ride. After spending four years as a major contributor to the publication she moved on to be a web content contributor for New Noise Magazine, whose print magazines have a national reach.
Related ItemsAlex CrickBumbershootDillon FrancisFeatureHighly SuspectKaleoKriston McConnellLordeTacocaTThe RootsThe SkinsWeezer
← Previous Story Bumbershoot Day 1 Recap
Next Story → Epica Storms the Showbox